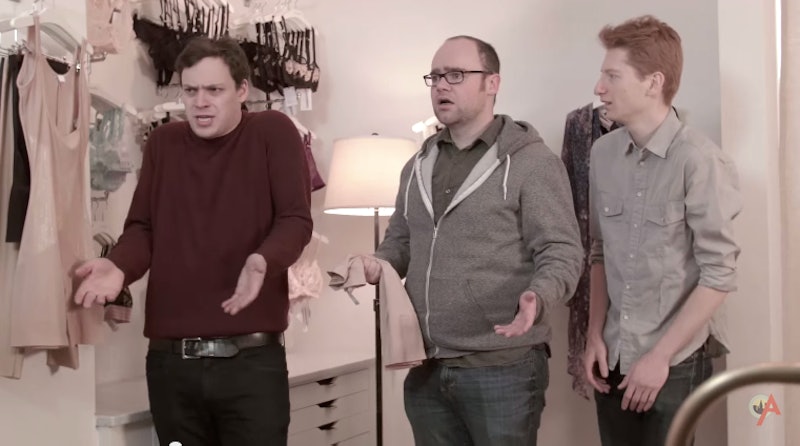 I have plenty of girlfriends who swear by their Spanx, and I'm not naive enough to entirely miss the appeal. Shapewear sucks you in where you want to be sucked in (or think you should want to be sucked in), creates curves where there are none, and works well as a slip dress that won't actually slip. But I've avoided Spanx entirely because the mere concept of shapewear totally freaks me out. I've read one too many online stories about how Spanx are bad for your health because they compress your organs, possibly causing irreparable damage to your muscles and posture, and create an environment in which bacteria — and yeast infections — can thrive. If all that health stuff wasn't enough to turn me off, I just looked at the price tag. I have never felt like I could justify spending over $100 on any one piece of underwear, even for allegedly beautifying, super high-end underwear.

Enter this video, produced by Above Average, in which three guys learn the horrible truth about Spanx, which were all the things that have terrified me about shapewear and have been trying to explain to my lady friends for years. Although we don't see the three men try on Spanx in this video, they bust into a lingerie shop, horrified by the mere concept of shapewear after one of their buddies tries on a pair of compression shorts in what starts off as a joke. "We thought it was like goofy underwear," they say. And the struggle to understand is real:

These dudes get me, and what I love about this video is the way in which it highlights the inherent gender inequality of shapewear. "So you’re telling me that the world only gives you 75 percent of what a man makes and then they force you to spend that money on nonsense like this?" one of the guys asks incredulously. "Oh, I’m gonna scream."

At first, the women in the store try to defend Spanx. They maintain that, despite all the discomfort caused by shapewear, women wear it for themselves. "We just wear them so our stuff, you know, doesn’t jiggle," says one woman. But that story quickly unravels. "It was like I could feel the lie coming out…" the saleswoman admits. "If I had my way," she adds, "I'd just run around in a muumuu all day. Free."

The men's outrage at the unfairness of Spanx is what makes this video so funny, but also highlights a real problem. Many women maintain that they wear shapewear for their own benefit, but it's hard to take that sentiment seriously. The goal of Spanx is to make a woman artificially appear more svelte and toned and fit into a pre-conceived standard of what makes a woman's body attractive. It does not celebrate the body a woman already has, but forces it to fit into what's accepted.

The flip side is that no man would ever be expected to wear uncomfortable underwear that sucks everything in. The mere mention of men in Spanx is a joke, as demonstrated by the end of this video, with the men ooh-ing and aah-ing over the discovery that there are also Spanx for men. To even consider that men would wear shapewear, let alone to actually see men wearing shapewear, is comical, rather than a prerequisite to being fashionable. The idea is too absurd to even entertain.

There are also issues of masculinity at play, for a man wearing Spanx is admitting his vanity and showing his insecurities. These doubts about one's body are overwhelmingly characterized as a feminine problem, not one also felt by men, which really just isn't fair. But the double standard exists: It's absurd for men to have to tuck in their belly bulges, but it's mandatory for women even if it is painful. And if men start thinking about it too much, then they're "weak," like women are perceived to be.

Perhaps women need to stop perpetuating the myth that they "wear Spanx for themselves, not for guys." It's beyond unjust that women must suck in and shape and contour in order to be physically wanted by others, while men can just let it all hang out and still be desired. Men also need to have a better understanding of the often crazy lengths women will go to in order to please them, and remind the women in their lives that they're beautiful, with or without makeup or accessories or Spanx, as the men hilariously do in this video. Besides, I really don't think most men notice whether women are wearing shapewear or not. To be honest, I can't tell when my friends are wearing Spanx, even after they've told me they have it on.

As the dudes remind us, "The jiggly parts are our favorite parts," so let your body be your body. If you want to wear shapewear, then go for it, but make sure you're comfortable in it and you're wearing it because you really want to wear it. But her muffin top — and his beer belly, for that matter — do not need to be hidden from the world by indestructible underwear.