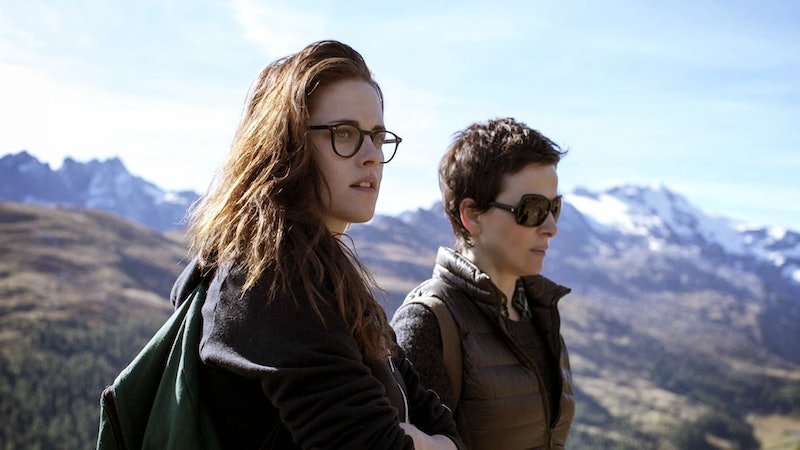 Springtime isn't typically the time that most must-see movies get released, but occasionally, there are exceptions. Just take last year, when March saw the premiere of eventual Oscar winner The Grand Budapest Hotel, or 2013, when the sweet, heartwarming 42 hit theaters in mid-April. This year has already seen its share of unexpected hits, from the horror film It Follows to the funny teen flick The Duff, and it seems that the surprised just keep coming. On Apr. 10, Clouds of Sils Maria is set to hit theaters, another film set on smashing the "no good movies come out before October" rule to pieces.

A French movie directed by acclaimed director Olivier Assayas, Maria is already being hailed one of the year's best films. Its premiere at Cannes last May had reviewers in awe, with similar reactions happening at Toronto, New York, and more festivals throughout the past year. The film may just be hitting theaters now, but already, it has a massive following — and for good reason. Five reasons why Clouds of Sils Maria should be your next must-see movie:

It Stars Kristen Stewart — And She's Amazing In It

Stewart's shown off her dramatic acting chops before in films such as Adventureland and Still Alice, but according to critics, Maria is her best role yet. In the film, she plays the loyal assistant to an aging actress (Juliette Binoche), whose relationship with her boss is more than a little unhealthy. It's a meaty role, and apparently, Stewart slays in it; her work received fantastic reviews, and in February, the actress became the second American actor ever to win a Cesar award — the French equivalent of the Oscars — for the role. Don't be surprised if the American version is next.

It's Already Won Plenty of Awards

It hasn't even been released in the U.S. yet, but already, Maria has picked up a Cannes Palme d'Or nomination, five Cesar nominations and a win, the Louis Delluc Prize for Best Film, and several more honors. All those critics can't be wrong, right?

The Cast Is Fantastic

In addition to Stewart, Maria stars Juliette Binoche and Chloe Grace Moretz, two hugely talented actresses who are given complex, important roles. All three stars would be worth watching individually, but together, they make for a must-see movie.

It's A Sharp Look At Celebrity Culture

One of the things that makes Maria so interesting is its approach to celebrity culture and the movie business. The movie appears to both analyze and ridicule the insane demands of the industry, in regards to aging, paparazzi, and the qualifications for becoming famous. Few movies dare to take apart the culture that supports them, but Maria seems to gain its strength from doing just that.

The plot of Maria revolves around a 40-something actress, Maria, who is asked to star in the theater version of the film that launched her career decades ago, but as the older of the two lead roles. She's nervous about being seen as aging, angry about the industry's standards, and dependent on the women in her life, including Stewart's Val, for support. It's a wonderfully feminist film, a rarity in today's Hollywood.