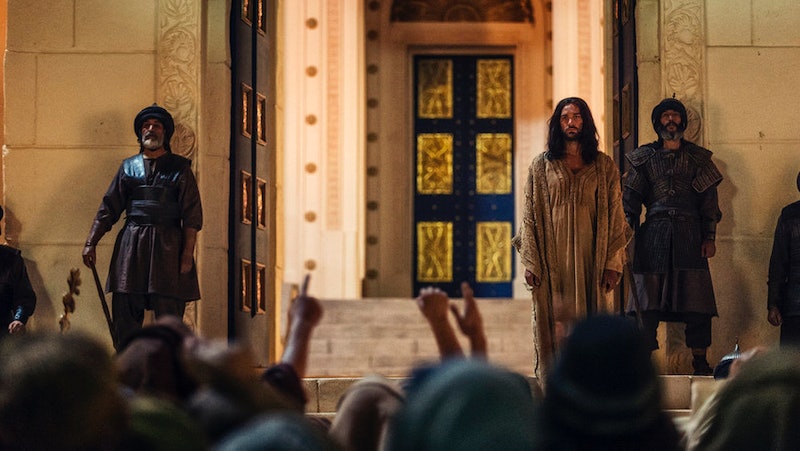 While those familiar with the Bible have their own personal preferences when it comes to different books and passages, the New Testament's focus on a central figure may make it an easier source for TV adaptation. That's likely why A.D. The Bible Continues is drawing better reviews than its predecessor The Bible, and will probably prove to be just as much of a ratings juggernaut. And yes, just like the name suggests, A.D. The Bible Continues is based on the New Testament, even though it is going to be making a few changes to make it a little more TV-friendly. It's adapting the Book of Acts of the Apostles, the story of Jesus Christ and the beginning of the Christian church.

The New Testament doesn't actually begin with Jesus' death, but rather his birth. However, it's appropriate that the Easter TV special starts on the original Easter Sunday, with the apostles still reeling from the death of their leader, who they believe to be the son of God. The New Testament and A.D. The Bible Continues both go on to depict Jesus returning to life three days after dying and escaping from his tomb, which was covered by a huge, immovable rock.

While the actual Bible largely focuses on Jesus, A.D. The Bible Continues will follow the emotional journeys of the various other figures. For example, Caiaphus and Pontius Pilate, two of the men responsible for sentencing Jesus to his death, find themselves shocked and horrified by the revelation that the man they killed is still walking around. Peter, basically the head apostle, is struggling because, as Jesus predicted, he denied being a follower of Christ three times out of fear. These emotional journeys are presented in the actual Bible, but not with the level of detail that a scripted show can provide.

If A.D. The Bible Continues can successfully humanize its biblical inspiration, then it will succeed as not just an adaptation for religious audiences, but as a successful, engaging TV show.

More like this
'The Simpsons' Will *Finally* Address How They “Predict The Future”
By Sam Ramsden
The Bestselling Novel 'The Doll Factory' Will Be Adapted Into Thrilling TV Series
By Catharina Cheung
The 'PLL: Original Sin' Creators Say A’s Identity Will Be “Very Clear” By The Season Finale
By Alyssa Lapid
'The Sandman’s Ending Is A Departure From Neil Gaiman’s Comic Book Series
By Kadin Burnett
Get Even More From Bustle — Sign Up For The Newsletter