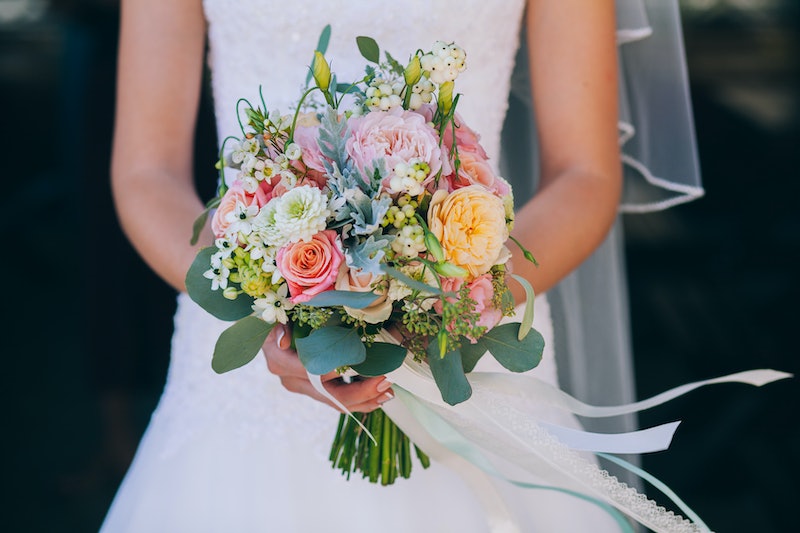 Folks of a certain post-graduate age might be feeling the pressure to get engaged as more and more of your social media feeds fill up with statuses saying things like, "He asked. I said YAS, QUEEN!" along with engagement ring pics, and glossy, professionally photographed wedding albums. Whereas once, the only loved ones who hassled you about getting married were your aging relatives over obligatory holiday meals together, now you are part of a generation full of people who are, in part, starting to settle down. And unlike previous generations, social media is giving us real time proximity to our peers' marital status, and it's bringing with it a whole new landslide of pressure to make the leap for ourselves. But what happens if you don't plan on making the leap into marriage...ever?

For your sake, friends, I hope that your peer circle is as vast and diverse as a Whole Foods aisle of non-dairy milk alternatives: some queer, some parents, some polyamorous, some hemp-based, some almond. (What, you aren't friends with almonds?) But for the rest of you, dragged down either by regional traditionalism or the lasting effects of your brilliant idea to join a sorority your sophomore year, you may find yourself the only minnow fighting its way upstream in a school of devoted monogamists with matrimonial inclinations. Everyone is swimming towards the common goal — a dream wedding and a forever love — except you. I mean, you love love, but all the structured commitments typically associated with it? Eh, not really for you. Which would be fine if everyone else weren't simultaneously trying to get you to change your mind and be just like them. We've taken the liberty of compiling some of their favorite platitudes, complete with scathing comebacks, below:

2. "You've been together for so long, why don't you just get married?"

Hm, you're right. My partner and I have been living together for so long, and dating for even longer, and guess what? We like it! We love each other, we're committed to each other, and we like our relationship status! Why on earth would we jeopardize our beautiful life together by stamping a legally binding label on it, the termination of which results in astronomically expensive, not to mention emotionally traumatizing, consequences? Why would we choose a type of relationship that requires us to take on a societally-condemned "divorced" status if we fail at it? Why, when we could just BREAK UP LIKE NORMAL PEOPLE?

3. "Just because you got divorced once doesn't mean it'll happen again."

This one goes out to you, Person Who Is Deeply Familiar With The Pitfalls of Marriage. Your detractors are correct: One failed marriage does not mean all your marriages will fail. However, I empower you to stand by your experience. Honor your trauma, your baggage, and all your other hazardous materials and use them to inform your future life choices. If that means marriage is for you later down the road, once you've healed, then that's great. But if what being married once taught you is that marriage is not for you, then stand by your convictions. You aren't damaged goods—you're learning from your experiences, and no one should ever be shamed for that.

So you're super stoked on having babies, but don't really care about the "first comes marriage" part of the equation, and when your loved ones learn this about you, they immediately throw down the two-parent family statistics. And yes, studies show that two-parent households are better than one. But you know what studies don't study? Families with three-parent households, or four-parent households or multi-family households. A child doesn't require two parents to raise it — a child requires a village. And just because co-parenting with a spouse isn't in my family plan doesn't mean I'm depriving my future kid.

Yes, drinking rosé with my roommates and watching Say Yes To The Dress/Four Weddings is a critical part of my Friday night post-work week self-care. I have shrewd opinions on everyone's aesthetic choices, and at the end of the 60 minutes, we all dialogue about how the structure of Four Weddings is inherently classist, and the winners are simply the couple who had the most money to spend. Don't even get me started on David Tutera and his Cheery Gay Savior complex. (IT'S NOT SOME GREAT DESIGN FEAT WHEN YOU HAVE AN UNLIMITED BUDGET TO MAKEOVER A WEDDING. Even I can make a wedding look good for $500,000 and I have the spatial skills of a whiskerless cat.) None of these train wrecks make me want to get married, though! They're just easily digestible brain candy after a long week. How 'bout I come snoop through your DVR and judge you for its contents, hm?

Sure I have. I've mentally bookmarked cool places to have a wedding, and gowns that I like, and neat details I've spotted at other weddings. But, even assuming I wanted to get married, (which I don't), one simple math equation would add up the costs of all my dreams and I would immediately SHUT IT DOWN. Not only do I not have the cool $55,000-$76,000 (the median and average costs of a wedding in New York, respectively, according to TheKnot.com) to throw myself a one-day party, why would I want to? Do you know what I could do with that money? Do you know the kinds of investments into my quality of life with a partner I could make with that money that does not involve spending $250 of it on a venue's "cake-cutting fee"?