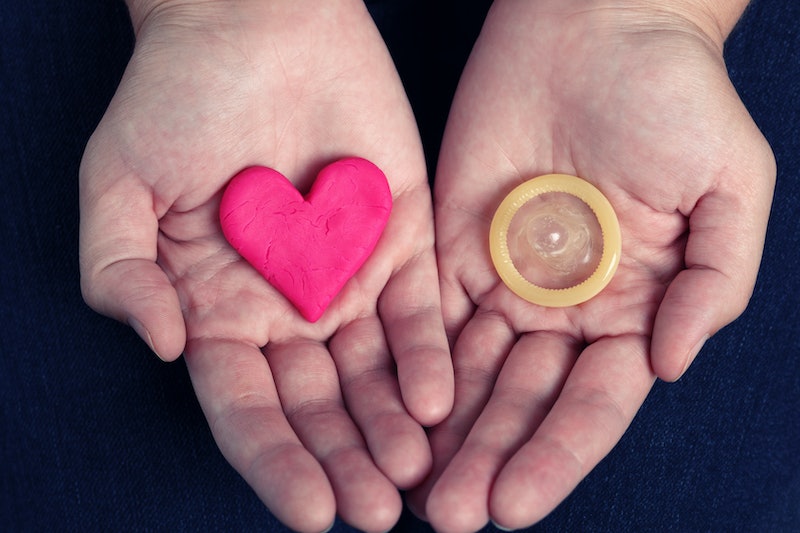 Did you know that April is STD Awareness Month? That means there is no better time of the year to talk about practicing safer sex! To celebrate this holiday, Planned Parenthood and Women's Health Magazine teamed up to create a survey to see exactly where women stand when it comes to STDs and sexual health. Together, they polled more than 3,000 women on issues like safe sex, condom use, and of course, sexually transmitted diseases.

It can be easy to forget, but you run the risk of catching an STD every time you have unprotected sex. Talk about putting a damper on your sex life! As Women's Health magazine reminds us, we're also putting other women at risk too when we don't practice safe sex, since it's likely your current partner will go on to have sex with other people and also probably has in the past (it's pretty rare to be with only one partner for your entire life).

As much as we might like to think of ourselves as being savvy when it comes to protecting ourselves, the results of this survey reveal that that might not be the case. Check out some of the findings below and head over to Women's Health to get the full scoop.

1. Many Women Rarely or Never Use Condoms

As shocking as it might be, 58 percent of women reported rarely or never using condoms when they have sex. Only 16 percent of women say they use condoms every time they have sex, which means we've got a lot more ground to cover than we may have thought. The reason using condoms is important is because outside of abstinence, it's the safest way to ensure that you won't contract STDs. Condoms aren't 100 percent effective, but they are a very good way to reduce your risk of contraction.

2. Almost All Women Say They Don't Use Protection During Oral Sex

Even though you're not running the risk of unwanted pregnancy with oral sex, you can still contract STDs through oral sex. That's why it's scary that 95 percent of women say they rarely or never use protection during oral sex. STDs can spread through genital to mouth contact and although the risk of contraction is less than in other types of sex, the risk is still there. Herpes, HPV, gonorrhea, and chlamydia can all be passed along during your oral sexy time. So please, use protection.

3. 31 Percent of Women have Never Been Tested for STDs

Even if you're using condoms, you still need to get tested for STDs. Ideally, you should be getting tested after every new partner and even if you only have one partner during that time frame, at least once per year. If you don't have visible signs of an STD you can still have one and not know it and some cases have no visible symptoms at all. STDs like HIV also don't show up on tests until three months after contraction, so this is another example of why you need to get tested often.

4. 37 Percent of Women Never Talked About Prevention With a Partner

More than a third of women have never once talked to a sexual partner about STDs- a total communication fail! If you're uncomfortable or feel that it's awkward, consider how much more awkward it will be to tell them that they gave you an STD or vice versa. Also, if you're not mature enough to talk about STD, then you probably shouldn't be having sex. If you're looking for a good time to talk about it, Dr. Vanessa Cullins recommends doing it before you get into bed, since it can be easy to get too caught up in the moment.

As Dr. Cullins reminds us, too many of us are being careless about prevention. "Unfortunately, it’s not uncommon for smart, educated, otherwise safe-playing women to forgo all caution when it comes to STD prevention," she says. Many times, we think that it won't possible happen to us, but consider the fact that 20 million new cases of STDs are reported in the US every year and half of adults will contract an STD in their lifetime. Resolve to get tested during April and use this month to clean up your act- you owe it to yourself to stay safe!