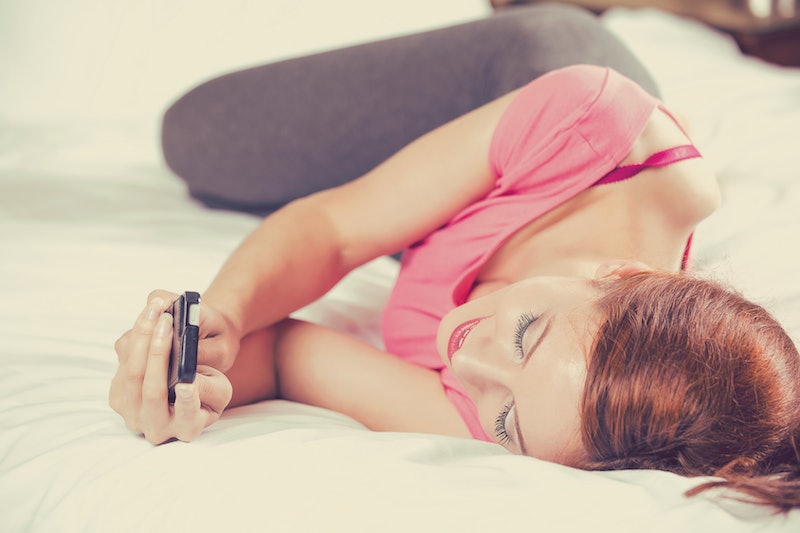 If you have a cell phone and a pulse, there’s a good chance that you’ve engaged in some level of sexting. Even if you haven’t spelled out some kinky desire or posed for a selfie of you and your boobs, you’ve probably considered it. Let’s be honest: Camera phones were invented for a reason and I personally believe that sexting is one of those reasons. But while sexting sometimes gets a bad rap, especially when images end up in the wrong hands and all of sudden the sexter is to blame, a survey found that sexting improves relationships.

The majority of people (56 percent) who sext say that doing so has actually helped their relationship, which totally makes sense, because what is sexting if not a modern day form of foreplay? According to sexpert Dr. Kat Van Kirk, sexting is a great way to keep things hot and spicy, while piquing the interest of your partner when you’re apart, like a down and dirty preview of what’s to come when you’re physically together again. Sexting is hot.

Sex toy company, Adam & Eve, did some heavy-duty research of the whole sexting phenomenon. What they found is that sexting stats are both interesting and revealing about just who’s the most guilty of getting their sexting on. Here are seven other sexting facts that might convince you it’s time to give it a try.

1. The Majority Of Sexts Are Sexy Words

As a lover of words, I can attest to the fact that words are far hotter than images, at least for me. Although I’m not sure that’s the case for everyone or if the majority of people are nervous about sending naked selfies, but a whopping 95 percent of sexts are just dirty thoughts or ideas. A brave 38 percent send naked selfies, 36 percent send some sort of sexy image that isn’t themselves, and 20 percent actually include their lovely faces in their sexts. The latter groups seems like you’re just asking for trouble, especially if it’s a messy breakup, but being guilty of sending more than a few boob shots, I’m in no place to judge.

When it comes to who’s sexting, women take the cake at 38 percent. Only 32 percent of men of sext, and overall, at least in the States, just 35 percent of people will send someone they know a little sumpin’ sumpin’. As for as the rest of the world goes, only a teeny, tiny 31 percent admit to sexting. However, I call foul. Really?! Only 31 percent? Yeah, right.

3. Couples In Long-Term Relationships Are Less Likely To Sext

Since sexting is all about tantalizing and keeping the hot spiciness alive in a relationship, it’s sort of sad that only six-percent of couples in relationships longer than 10 years sext. The couples who sext the most, at 42 percent, are those who categorize themselves as “dating,” and not far behind at 32 percent are the couples who have been together for less than ten years.

With 16 percent (compared to the eight-percent or women) of men effing up and accidently sending a sext to family member instead of their intended target, I want to make a joke about how multitasking and men just don’t mix. However, I’ll take the high road and won’t. But in addition to that, 10 percent of men have accidentally sent a sext to someone other than their partner ― yikes ― and five-percent of women have also fallen down that rabbit hole of lies, excuses, and drama.

5. Millennials Are The Ones Sexting The Most

It should come as no surprise that the most common age at which people start sexting is during their 20s and 30s, with 32 percent of 19- to 29-year-olds and 27 percent of 30- to 49-year-olds being the ages at which people started sexting. Third in line, at 22 percent, are those 40 and older, and 18 percent started sexting between the ages of 15 and 18.

6. People Prefer To Sext Their Partner Than Anyone Else

Twenty-five percent of men and 16 percent of women have sent a sext to someone other than their partner.

7. Most Sexts Are Saved. Forever.

So maybe “forever” is an exaggeration, but according to the study 60 percent of people save either the sext they send or receive on their phone. While that might not seem that scary of a thought, remember there’s that little thing called iCloud, and if you saw Sex Tape, then you know that once any of your sexts are sucked up into the Cloud, you’re never getting them back. Now that’s some scary shit right there.

More like this
Are Quality Time & Gift-Receiving Love Languages Compatible?
By Lexi Inks
The Differences Between Polyamory & Open Relationships
By Lexi Inks
The 19 Best Tweets & Memes About Bisexual Awareness Week
By Lexi Inks
These 4 Signs Are The Seductive Sirens Of The Zodiac
By Brittany Beringer
Get Even More From Bustle — Sign Up For The Newsletter