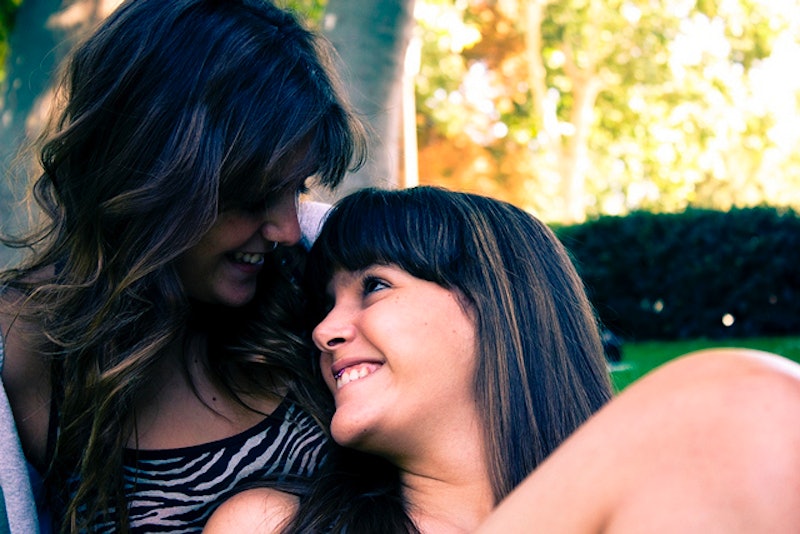 Instead of hopping into bed with someone and hoping for the best, there’s a proven method for having better sex: communication. It might seem an obvious step, but apparently gay couples wrote the book on this practice, and straight couples have a lot to learn. It’s “a guiding principle of same-sex sex,” writes Connections Mic, and it’s time for one little question to become standard practice in all sexual relationships: “What are you into?”

Though it might seem obvious to make such a query, apparently far too few straight couples are verbally communicative about their preferences in bed. In a video, sex columnist and expert Dan Savage considers gay advice for straight couples. "I really think the thing that straight people can learn from gay people ... is a certain honesty in how you talk to each other about sex, how you meet each others’ sexual needs," he says.

It’s far too frequent that a man and woman get as far as agreeing to have sex — and that’s where the conversation stops, if it was even a conversation to begin with, Savage says:

When a man and a woman go to bed together, vaginal intercourse in the default assumption. They get to consent, they get to yes, and she gets fucked. They actually stop talking — they stop negotiating — after ‘yes.’ She’s gonna get fucked.

But when two men go to bed together, they get to yes — “and that is the beginning of the conversation,” Savage says. “That’s why we have better sex.” He calls “What are you into?” four “magic” words: “Straight people don’t say that to each other.”

Rule anything in, rule anything out, Savage says: “That’s what straight people should take away from gay people. That conversation about sex.”

Well, perhaps. Though some straight couples are quite adept at discussing sex, it’s probable that gay couples are more experienced in being frank about what goes down in the bedroom (or rooftop, or kitchen floor). “Research shows that gay and lesbian couples also talk about difficult subjects in a more healthy fashion,” says sex expert Pat Love in a video on the subject.

In an incredibly dry writeup of a study comparing gay and straight couples (or “dyads,” in their terminology) in Developmental Psychology, it was found that few noticeable differences were observed in terms of the quality of interactions within couples. However, they found that “lesbians appear to be particularly skilled at working harmoniously with their partners,” so there’s that.

It is, of course, probable that plenty of heterosexual couples are great at talking about what they like — and don’t like. “The more we communicate, the more our partners learn about what we like — and dislike — during sex, and they can use that knowledge to cater to our needs,” sex researcher Elizabeth Babin tells Self.

Turns out Salt-N-Pepa were ahead of their time when they said, “Let’s talk about sex, baby.” To quote their immortal words, “Don’t decoy, avoid, or make void the topic — cuz that ain’t gonna stop it.” Preach.