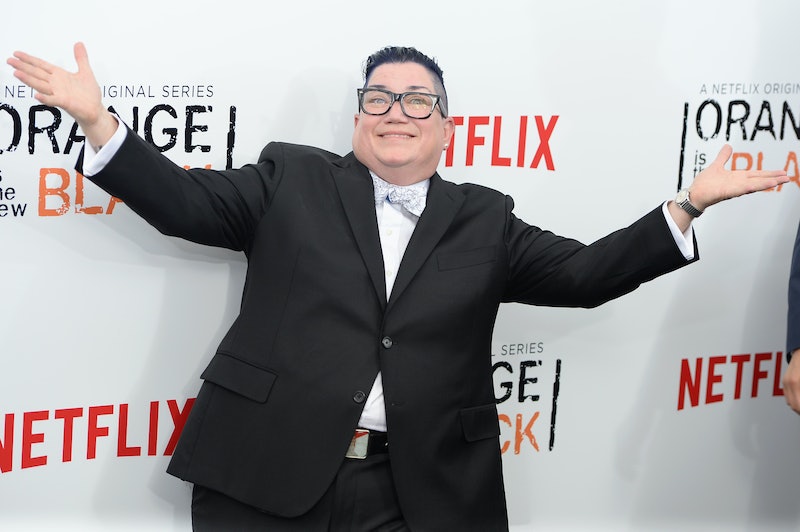 If you've been looking for a role model, then Orange Is the New Black 's Big Boo might just be the right person. In an interview with People, Lea DeLaria talked body positivity in an inspiring and uplifting way. Some might have noticed that DeLaria's lost weight — 50 pounds to be exact — but it's not because she didn't love her size or embrace her body. Actually, it's because she was diagnosed with diabetes. Thanks to her diet and medication, the actress has slimmed down. With that said, though, DeLaria still believes you should love yourself no matter what.

The actress has never focused on beauty standards, but rather has always made sure she was healthy. According to her, she's never paid much attention to what others have said about her size, because she believes she and others are beautiful no matter their appearance. She told People,

I hate that. When I lecture at universities I always say, "Look, I got laid just as much as I did when I was 50 lbs. heavier than I am right now." So, frankly, you're beautiful no matter what your size is. This obsession we have with thinness in our industry and in the world needs to [go away].

See? I told you her words are powerful. Similar to Kelly Clarkson who is the queen of body positivity, DeLaria's outlook on life is exactly what this world needs to hear. We need more acceptance, not rejection.

I've been an advocate for queer people my entire life. I've been a professional lesbian for 33 years, and what's important now that I've leaped into the mainstream – I was moderately famous, now I'm kind of worldwide famous – all I've ever wanted to do is change the world and get laid.

Well, DeLaria is definitely changing the world. As for her latter goal — well, seeing as she's marrying Chelsea Fairless, I'm going to assume she's succeeding in that area as well.