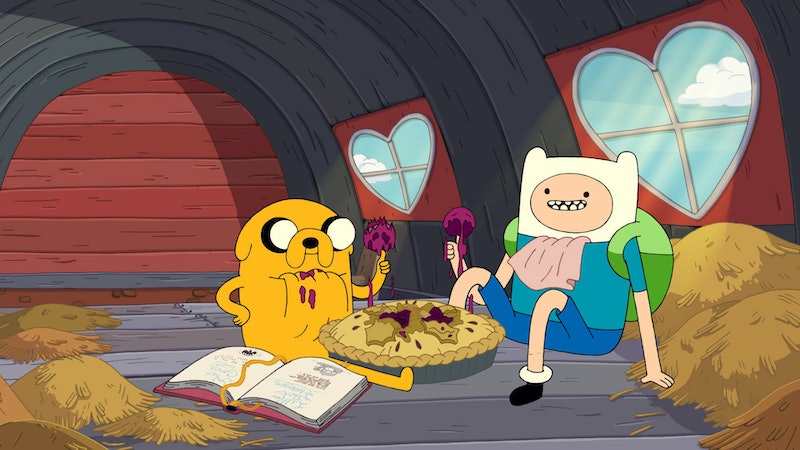 Even though Adventure Time's Land of Ooo has gone through an apocalypse, the fictional animated world still seems like it's got every kind of environment for Jake the dog and Finn the Human to explore. From forests and the Candy Kingdom to the lands of ice and fire, Ooo is more complex than Game of Thrones' Westeros. Adventure Time seems to have so many places for Jake and Finn to embark on every kind of adventure, which often include really profound quotes that can be used for any situation in your daily life. And as the toon approaches its fifth anniversary, it's time to look back at those nuggets of wisdom.

Pendleton Ward created Adventure Time in 2010 after working as a storyboard artist. In an interview with Animation World Network, Ward mentioned that one of the major influences on the series was The Simpsons, another classic animated series that has a rich world and ever-so-relatable quotes. "I liked The Simpsons a lot. It made the biggest impression on me," Ward said. "I try to find the simple-ness in making a piece of animation that makes you feel happy. I think there is something both innocent and stupid about watching a cartoon and feeling butterflies in your tummy. So I try to pull from that feeling."

No matter what you're feeling, here are 10 Adventure Time quotes for everyday situations.

When You Simply Cannot Believe It

When You're So Tired

When You Feel Like a Having A Burrito With Everything

When You Feel Like You've Got Adult Life Down

Sometimes it's as simple as making your own dinner. Baby steps, right?

When You're Wondering If You Should Put On Sweatpants Tonight

Jake and Eva Mendez seem to share the same opinion about sweatpants.

When Trying Something New Is Harder Than You Thought

Just keep going and practicing and you'll be good at it before you know it.

When You Feel Unattractive

It's inner beauty that counts the most.

When Ignorance Is Truly Bliss

Because who wants to face reality?

When You Need To Forget Your Problems & Relax

Perhaps by watching some episodes of Adventure Time.