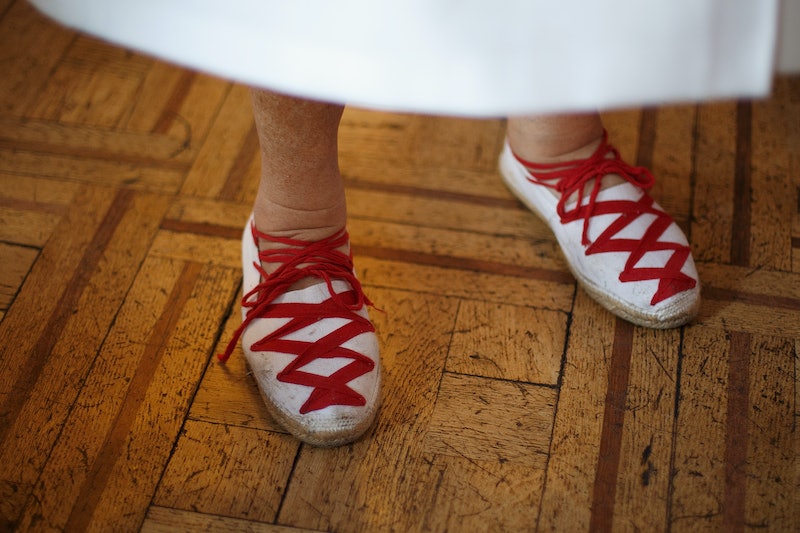 If I were to rank my excitement when it comes to shopping for different seasons, I’d say that shopping for spring would come in first, followed closely by shopping for fall. Buying new clothes and shoes in the spring and fall is exponentially more fun than shopping for winter and even summer, because it’s at these two weather junctions, in September and April, that we get a change in temperature that begs us to update our wardrobes not for functionality but for frivolity. We can buy floral skirts and denim jackets and all those items we’ve been yearning to wear instead of down coats. I know I’m not the only one who has scrolled through many online shopping pages over the past couple of weeks, counting down the days until I can shed my wool sweaters once and for all.

On my hierarchical wish list, though, shoes, not sweaters or denim, always come in at the top. I’ve flirted with many types of footwear but sneakers and flat booties are my go-to purchases, and I’ve acquired enough to count a small collection among both styles. I’m too casual for heels and I like the idea of flats but I’ve never been wooed enough by a pair to make them mine. Plus, I don’t find flats as comfortable as most of their fans claim them to be. This spring, I’m trying to break out of my sneaker-slash-bootie mold and I think I’ve settled on a style that’s similar to a flat but has the comfort of a sneaker: the espadrille.

Espadrilles have never really made ultimate trend status in high street fashion. They’ve lingered on the sidelines, close to becoming the “it” shoe but never quite making it all the way. I remember when J. Crew came out with their espadrille wedges in the mid-aughts. They were popular for a while, came in preppy patterns like polka dots and nautical stripes, and almost every girl in my high school had a pair, except for me because I was committed to the Birkenstock Arizona cause in 2005 (I still am, for the record).

Espadrilles came back to online shopping carts and store displays a couple of years ago when retailers like Shopbop and J. Crew started selling Soludos, a niche brand that specializes in the flat fair-weather shoe. I bought a pair of Soludos on a whim in 2011 because they were on sale and they seemed like a practical shoe to wear to the informal internship I had that summer. I wore them out until they were only useful for protecting my feet from the grimy tiled floors of my college dorm’s bathroom.

I’m not mistaken in thinking that espadrilles have always been around. The jute rope and canvas shoe originally hails from the Pyrenees, the southwestern part of Europe where France and Spain meet. King Aragon’s infantrymen wore them in the 13th century, as did priests and mine workers. When the Spanish colonized South America, the espadrilles went with them. In modern fashion history, they caught on in the 1940s, when Lauren Bacall wore an ankle-laced pair in the 1948 movie Key Largo. They got the Hollywood treatment from the likes of Sophia Loren and Grace Kelly and the waspy treatment from JFK, who was known to wear them while summering in Cape Cod. In the '60s Yves Saint Laurent introduced them in wedged form.

I’ve seen a few evolved espadrille styles recently that would make plausible spring footwear options. Since its founding in 2010, Soludos has kept the breathable rope sole but expanded beyond its first canvas slip-on. I’m tempted by their smoking slippers and criss cross platforms, either in perforated leather or embroidered chambray. The shoe that’s stuck with me the most, and thanks to targeted advertising, follows me to my Facebook newsfeed and Google sidebar, is Free People’s Aurora espadrille. I’m partial to the black leather style, whose utilitarian slant makes it a practical shoe for city sidewalks. They have a slight platform and a buckle that keeps everything in tact. I like a shoe that I can run in should I be late for wherever I’m headed, which is where flats traditionally fail me.

I’m drawn to the espadrille, at least in its Free People iteration, because of its multi-purpose nature. I like shoes that can take on a new identity in different situations, which is why I don’t like heels. They’re high-maintenance and only work for a particular scenario. When I wear them, I have to know ahead of time if I’ll have to walk a lot or if I’ll be on my feet the whole time. A pair of black leather espadrilles, however, adapt well to an event where you want to be dressed up, but also want to wear a comfortable, sandal-like shoe. They’re great if you’re a sneakerhead like me, or a dainty ballerina with a passion for flats. So join me in my cause to make espadrilles the “it” shoe of the spring.Images: Getty; Courtesy Brands

More like this
The 8 Best Walking Shoes For Metatarsalgia, According To A Podiatrist
By Lauren Moison
Rita Ora’s Sheer Dress & Mermaid-Inspired Prosthetics Stun At British Fashion Awards
By Sophie McEvoy
This Scandi Beauty Brand Is Basically Hygge In A Bottle
By Justine Knight
8 Engagement Ring Trends That’ll Be On Every Finger In 2023
By Allie Fasanella
Get Even More From Bustle — Sign Up For The Newsletter