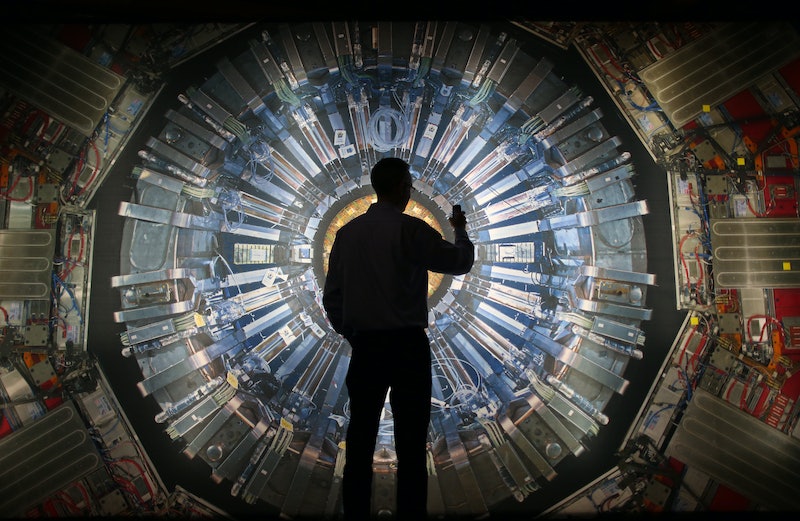 Sunday was a big day for science enthusiasts and physicists around the world, as the particle accelerator known as the Large Hadron Collider was restarted after being dormant for the past two years, CNN reported. If, like me, you were not the most scientifically-inclined person through school, it might not be immediately apparent why a giant particle accelerator in Switzerland being restarted is such a big deal. What scientists might potentially learn from the LHC, though, could answer a lot of questions about life not just on earth, but the origins of the universe itself.

With the LHC, which is 17 miles long and took hundreds of scientists and engineers from all over the globe 10 years to build, scientists are trying to recreate the conditions immediately following the Big Bang (not the show with Sheldon and Penny, the actual start of the universe), according to CNN. You're almost certainly familiar with the most well-known discovery made possible by the LHC: the Higgs boson, or, as it's better known the "God particle."

Two scientists won the Nobel Prize in 2012 for discovering the theoretical particle, which they first suggested in 1964. But they were unable to prove its existence until the LHC came along. What's the big deal about the Higgs boson? It explains how subatomic particles (which make up electrons, protons, and neutrons, which make up atoms) interact with each other. This is key to understanding how matter is formed — you know, the thing on which all life as we know it is based.

That's why scientists are so excited about getting back to work with the LHC, which was getting a needed tune-up, because they're hoping it will do for other areas of theoretical physics what it did for the Higgs boson. Theoretical physics, as the phrase implies, are theories which are not able to be tested or proven definitively, but which are strongly supported by observation and other evidence. As The Guardian explains, particle physics is based on The Standard Model, which is known to be flawed because it is incomplete. By smashing together particles in the LHC, it's possible physicists will be able to develop a better understanding of dark matter, antimatter and gravity.

So, what does the LHC actually do? According to CERN, the European Organization for Nuclear Research where the LHC is located, two particle beams travel near the speed of light before they are made to collide (hence the "collider" in its name). The term "hadron" refers to the kinds of particles it accelerates: protons and ions, which are part of the group of particles known as hadrons, according to CERN. Lots of energy, really fast, at high rates of speed, smashing together to uncover the mysteries of the universe. Who says science isn't cool?

More like this
Adam Driver & Joanne Tucker’s Relationship Timeline Starts With Cheese
By Jordyn Tilchen
'Waterloo Road' Is Back, With More Than A Few Familiar Faces
By Sam Ramsden and Vivian Iroanya
Mollie King & Stuart Broad Just Shared The First Pic Of Their Baby
By Sophie McEvoy
Kendall Jenner & Devin Booker’s Relationship Timeline From Start To Finish
By Jordyn Tilchen and Jake Viswanath
Get Even More From Bustle — Sign Up For The Newsletter