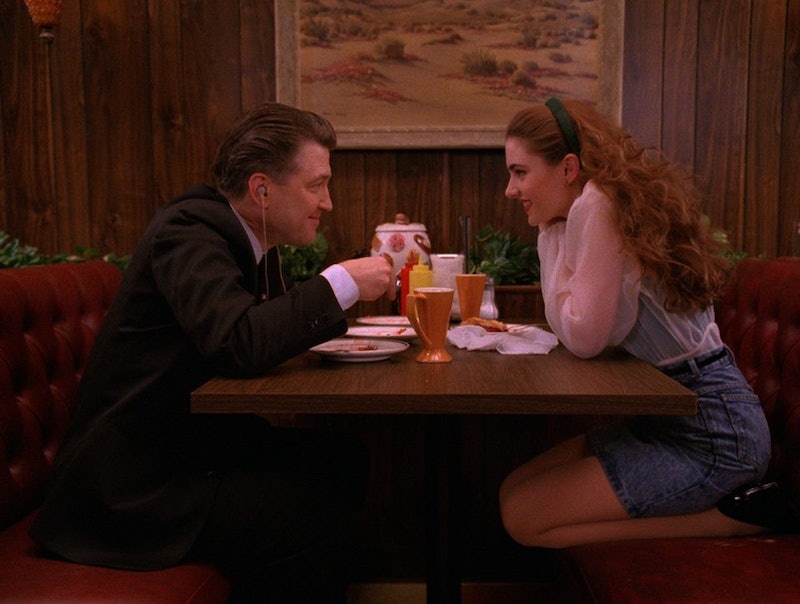 Twin Peaks is a TV series that was — and still is — quite an enigma. David Lynch and Mark Frost created the series in 1990 and it's set to air new episodes once again, but it just might have to be without Lynch. As the show reaches its 25th anniversary, there are still so many things to know about Twin Peaks, like why Special Agent Dale Cooper (played by Kyle MacLachlan) never got together with Audrey Horn (Sherilyn Fenn), and the story behind the casting of Killer BOB.

Twin Peaks premiered in 1990 to great ratings and even better reviews. "The surpassing strangeness of Twin Peaks is not easy to pinpoint," Time's Richard Zoglin wrote in 1990. "Its distinctiveness is almost purely a matter of style. The pace is slow and hypnotic, the atmosphere suffused with creepy foreboding, the emotions eerily heightened." Frost and Lynch had pitched the series during the 1988 Writers Guild strike and once ABC liked the idea, Frost and Lynch wrote the two-hour pilot in 10 days.

Last Fall, Showtime announced that the network would be reviving Twin Peaks for a limited run in 2016 and MacLachlan would be among the stars reprising their roles. Before that happens, here are 9 things you probably didn't know about the show's first run in 1990.

Frank Silva started out just as a set dresser, but Lynch had other ideas. One day, Silva accidentally trapped himself in a room when moving a dresser around and Lynch insisted on filming the image. While filming the pilot, Silva's image was caught in a mirror reflection — and that's when Lynch decided that Silva should be Killer BOB and that he could definitely use the trapped-by-a-dresser shots. Thus, Killer BOB was born.

2. Frost & Lynch Were Prepared In Case ABC Didn't Pick Up The Show

Unsure that ABC would go on with the series, Frost and Lynch planned an ending for the two-hour pilot that would've enabled them to release the pilot as a movie in Europe.

Rossellini was going to play Giovanna Packard, but dropped out right before production was going to begin. Then Joan Chen was cast in the part and the role became Josie Packard.

Agent Cooper and Audrey literally danced around their attraction for one another, but it was Donna Hayward that came between them behind the scenes. At the time, Boyle was dating MacLachlan and was very much against a Cooper-Audrey pairing. Fenn told The Onion A.V. Club:

She was mad that my character was getting more attention, so then Kyle started saying that his character shouldn’t be with my character because it doesn’t look good, ’cause I’m too young. Literally, because of that, they brought in Heather Graham—who’s younger than I am—for him and Billy Zane for me. I was not happy about it. It was stupid.

5. Sheryl Lee Was Originally Only Suppose To Play Dead

Lynch cast Lee as Palmer to simply "play dead." But then he discovered she could act. Soon, she started appearing in flashbacks and as Laura's cousin, Maddy.

6. The Fingernail Scene Made The Network Uncomfortable

ABC Standards and Practices thought the tweezers-in-fingernail scene was too long and wanted it to be shorter. But Frost & Lynch fought to keep it the way it was — and won.

ABC decided to take a huge chance and fit Twin Peaks opposite the hit comedy Cheers on NBC, but it paid off. The drama series had great ratings anyway. ''If it sustains, it's an extremely significant development,'' Alan Wurtzel, ABC's senior vice president of research, told the New York Times in 1990. ''It has implications for the whole night and basically for our whole schedule.''

But those high ratings plummeted during Season 2 to become ranked 85th out of 89 shows, once Laura Palmer's killer was revealed. ABC also began shuffling Twin Peaks around its schedule, including banishing it to the TV dead zone known as Saturday nights. "We're looking forward to having 'Twin Peaks' on any night but Saturday," a Lynch and Frost spokesperson told the New York Times. "Our fans have proven it's not a Saturday night show."

After that, the show was canceled, until 25 years later. How much has changed in Twin Peaks since? We'll find out in 2016.