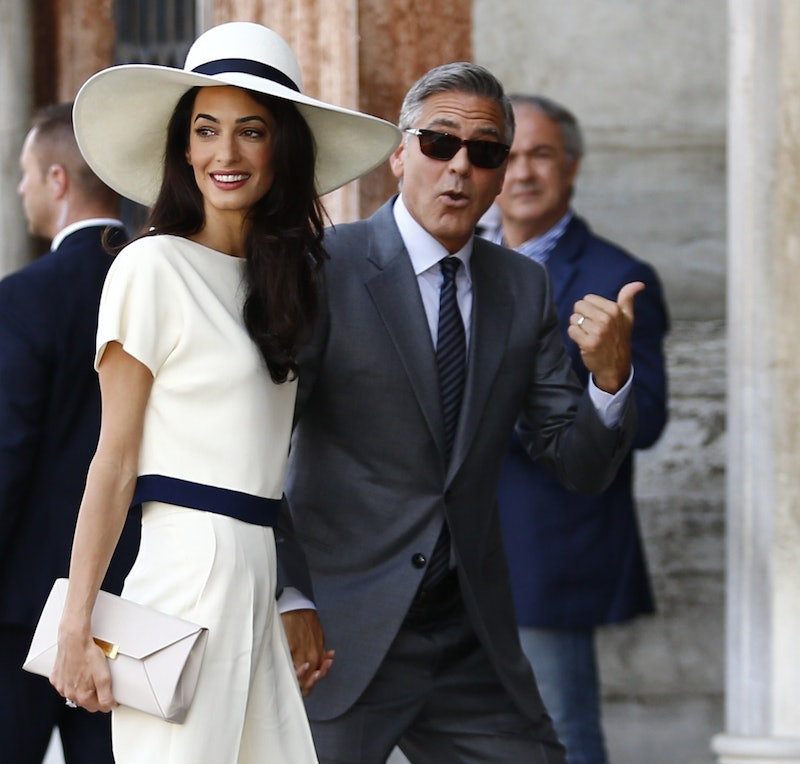 Ellen McCarthy turned 30 and broke up with her boyfriend of 18 months, in what she refers to as a “total cliché.” At the time, all of the questions that run through a newly single woman’s mind started running through hers: “How do I find someone? How do I fall in love? How do I make my relationship last?”

The main difference between McCarthy and the rest of us, though, is that she started working as a full-time weddings reporter for the Washington Post, and her job was the find answers to these relationship questions.

In her new book The Real Thing: Lessons on Love and Life from a Wedding Reporter’s Notebook , McCarthy tells dozens of these stories of falling in love, of getting married, and, maybe most importantly, of making relationships last, and reading about these couples is the best way to learn how to make your own relationship work. As McCarthy explains it, “Relationships are mysterious and private, so we want to get behind the curtain. And certainly it can be instructive to learn from those couples we admire, trying to incorporate some of their best practices into our own lives.”

The Real Thing: Lessons on Love and Life from a Wedding Reporter's Notebook, $18, Amazon

McCarthy peeked behind those curtains, having interviewed hundreds of couples about their weddings and divorces and relationships, documenting plenty of examples of successful relationships, as well as those that were… less-than-successful. In this book, she gives some concrete suggestions to make it work, as Tim Gunn might say. Here are 11 of this wedding expert’s best tips to make your relationship last:

Ask For What You Want

My boyfriend and I fight sometimes, and usually the trigger is when he does something that I don’t approve of, like stay out until 2 a.m. at the bar with his buddy, but I don’t say anything because I want to be a “cool,” laid-back girlfriend rather than a crazy, controlling one. But despite my best intentions, the real result is I become resentful of my boyfriend's inability to read my mind and do what I actually wanted him to, even though I didn’t say anything.

According to McCarthy, this is bad. Like, really bad. “Unless you’ve shacked up with a professional psychic, it’s probably best to pipe up about whatever it is you want. Then at least your partner has a chance of giving it to you.” If you want your relationship to last, figure out what you want from your partner and ask for it. Otherwise, someone will always feel like they’re getting the short end of the stick, and that’s not sustainable.

Commit To The Long-Term

Edgar and Betty are one of the first couples McCarthy profiles, and they are adorable. Married for 65 years, their relationship really started blooming when Edgar was sent to the hospital with pneumonia and Betty sent him a letter that simply said, “Carry on, kid.” Many letters and a couple dates later, the two got married. Of course, they fought over the course of 65 years, and even Edgar admitted, “I wouldn’t give you twenty cents for the chances of that marriage lasting.”

But the formula for their long-lasting marriage is pretty simple. As McCarthy explains it, “It wasn’t fate or serendipity that created their lasting marriage; it was commitment.” It sounds a little redundant to say that to make your long-term relationship work, you need to make a long-term commitment, but that's it! Both people need to make it want to last, and if that commitment is there, there’s a good chance that you can make it work.

It’s great to have an instant spark or chemical reaction when you meet someone, and that physical connection is important. But if you want your relationship to last, know that lust won’t last. As Leslie Knope would say, you need to love someone and like someone, too, and McCarthy agrees. “Some once told me that marriage is mostly about sitting on the couch with the same person decade after decade,” she writes. “So maybe the question is not: ‘Who do you want to go to bed with?’ But instead: ‘Who do you want to sit next to?’”

A relationship shouldn’t be a constant roller coaster of emotions and fights. There’s something to be said for coming home at the end of the day to someplace comfortable and with someone who’s comforting waiting there for you. McCarthy writes, “Society doesn’t tell us to seek a mate who embodies the qualities of a good pair of pajamas: soft and warm, but loose enough to really let you breathe.” And really, we all just want a good pair of pajamas, just like we all want someone who loves us and makes us feel comfortable.

Fight When You Have To…

Having an easy relationship isn’t the same as having a non-confrontational one, and sometimes couples need to fight. After years of interviewing couples, McCarthy was most wary of those who claimed they never fought. It usually indicated they were avoiding the problems in their relationship instead of discussing and subsequently resolving them. So if there’s something wrong, then it's OK to fight. It’ll only help move the relationship forward. Avoiding fights will cause irreparable damage, while bringing something up that needs to be said can make the relationship stronger.

Disagreeing with your partner isn’t a problem, because it happens in every relationship, be it your relationship with your romantic partner or with your parents. What matters is how you deal with the fight, and escalating and amplifying every argument is not the right way. McCarthy met a couple who held hands whenever they had a disagreement, which helped them stay “in tune with each other, even when they’re at odds, and prevents conflicts from escalating out of control.” Touching your partner encourages emotional closeness, so keep that in mind the next time you get into a fight.

Accept What You Can’t Change

When you spend as much time as you spend with your boyfriend or girlfriend or husband or wife, it's inevitable they will do something that annoys you, whether it’s chewing too loudly or forgetting to take out the trash or perennially tailgating the car in front when driving. “It’s hard to be happy with what you have when you’re busy wishing for something different,” so McCarthy advises to stop nagging and start loving your partner “just as they are.”

The most basic way of demonstrating interest in another person is to pay attention to them, but taking time to be attentive is easily forgotten in the hustle and bustle of everyday life. McCarthy talked with a researcher from the University of Michigan, Oakland, who recommended that couples follow the 10-minute rule. “For ten minutes each day, couples should ‘talk about something other than work, family, who does what around the house or your relationship.’” The goal of this exercise is to get your partner to pay attention to you, your hopes and dreams and worries, and vice versa. That way, we can “see — really see — the person with whom we’re sharing a life,” rather than get lost in discussions of errands and logistics.

You Partner Isn’t Your Savior

In the same way you should accept the things about your partner that you can’t change, there’s going to be things about yourself that you won't change. You also shouldn't expect your partner to be the one who fixes them. “Whatever baggage you were already carrying when you met Mr. or Ms. Right comes with you into the relationship,” writes McCarthy, and that’s why it's dangerous to believe the myth of “Happily Ever After.” Those problems aren’t going to go away just because you’re in a relationship, and if you want your relationship to last, don’t put the onus on your partner to create a fantastical, perfect world for both of you.

This is another tip that doesn’t seem to need saying but is oft forgotten in McCarthy’s experience. Because we spend so much time with our partner, and often know exactly what buttons to press to send them into the deep end, it’s easy to forget to be nice. McCarthy recommends, “to treat your partner with as much graciousness as you would a waitress of check-out clerk.” Politeness is crucial in making a relationship last, so be nice, and remember to say "please" and "thank you."

“Brewing the morning coffee, touching the small of your partner’s back, filling their car with gas. These things add up to more relationship satisfaction than a fancy dinner on Valentine’s Day ever could,” writes McCarthy. A long-term relationship is special because it makes the everyday easy and comfortable and safe. You don’t need a white horse and a dozen roses to show your love. Just do the dishes every once in a while.

More like this
16 Novels That Paint A Realistic Portrait Of Abortion
By K.W. Colyard
Aesop's Queer Library Is Open
By Tomi Otekunrin
What’s An Open Relationship, Actually?
By Lexi Inks
So, How Soon Is Too Soon To Move In Together?
By Jessica Estrada
Get Even More From Bustle — Sign Up For The Newsletter