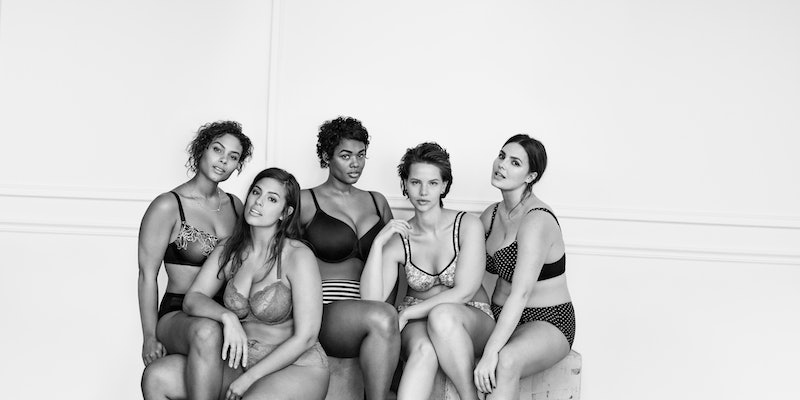 Plus-size lingerie and the plus-size babes who wear it are about to get a major boost with the announcement of retailer Lane Bryant's new campaign #ImNoAngel. Joining those before them who have chided Victoria's Secret's lack of body diversity in their fashion shows, advertising, or even sizing, Lane Bryant is encouraging their customers to celebrate the fact that they're different to the prototypical "Angel" and that all sizes can (and deserve to) be sexy by using the hashtag to share selfies. The campaign will also feature photos by legendary Cass Bird and TV commercials starring some of the hottest plus-size models of our generation: Ashley Graham, Marquita Pring, Candice Huffine, Victoria Lee, Justine Legault, and Elly Mayday.

"Our '#ImNoAngel' campaign is designed to empower ALL women to love every part of herself," said Lane Bryant CEO and President, Linda Heasley, as reported by Daily Venus Diva. "Lane Bryant firmly believes that she is sexy and we want to encourage her to confidently show it, in her own way." The campaign kicks off April 6th with new content that introduces the models and their picks from the brand's Cacique Intimates collection rolling out over the next few weeks on their website. Sexy things for plus-size women in response to their exclusion by the mainstream? It's all good, right?

Whilst these efforts are undoubtedly necessary, I do wish the brand would have taken representing all bodies into their own hands by featuring a more diverse slate of women, rather than relying on social media participation from customers. Although the lineup is fairly ethnically diverse and features cancer survivor Elly Mayday, I cannot help but feel underwhelmed that the ad featured five models of similar heights and proportions. Even in the body positivity movement, there's still body shaming paired with coveted proportions or a "right" way to have curves. If a brand is saying all bodies are beautiful and all bodies are sexy, then that needs to mean all bodies. Period.

It would be refreshing to see, perhaps, Tess Munster or even real customers of the brand in the advertisement. Once again, it also seems like women with physical disabilities and openly trans women have been left out of the conversation of what bodies are considered sexy and desirable. Five women can't represent everyone, and in this case I feel like they've only scratched the surface.

Creating a hashtag that wasn't in direct opposition to something would have also been appreciated. While the brand says the campaign is for all women, I can't help but see this as pitting two groups of women against each other: the ones who fit into the lingerie at Victoria's Secret, and the ones who don't. I'm all for celebrating our differences and being proud of being plus, but saying "I'm no Angel" doesn't feel like it's encouraging a celebration of all bodies.

Judging by the amount of Instagram users who have already jumped on this hashtag only a few hours after after the campaign launched, it's clearly resonating with women who've felt excluded by Victoria's Secret and other messaging that decides what/who sexy is. Of course, allowing women to see multiple versions of what sexy is, and can be, is important. By encouraging use of the hashtag, Lane Bryant is putting that ability into their customers' hands — some of whom may be making themselves vulnerable or thinking of themselves as sexy for the first time. You can't deny the power of that. But there must be more ways of personifying that power than isolating other groups of women in order to do so.