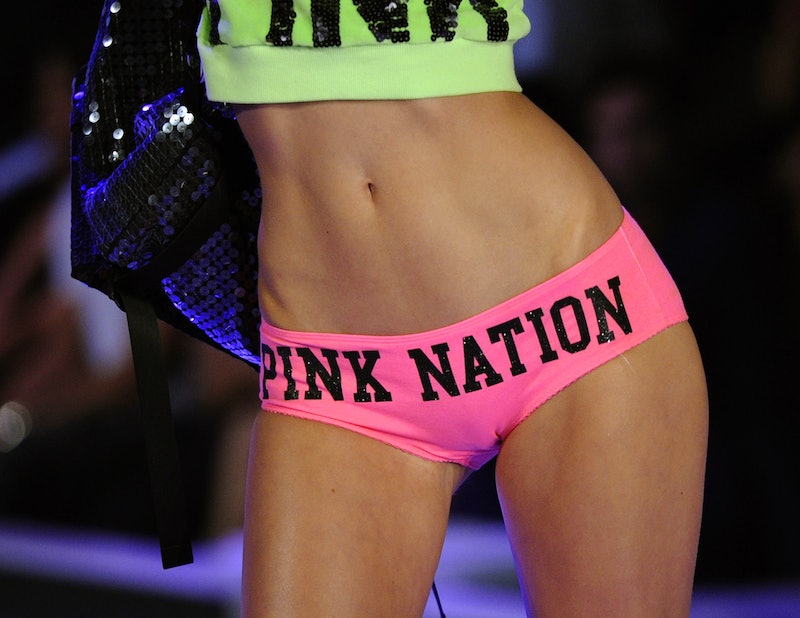 Picture it: You pull up to the mall you know so well and practically walk to your lacquered pink refuge without even thinking — your feet just sorta know. You love Victoria's Secret so much that you're a regular at the location closest to your house and you've paid for your bounty of VS products on your Angel Credit Card. You'd expect to have a closet full of lingerie by now, right? Well, not if you're customer Dana Drew, who only frequents her local store for the cosmetics and beauty products. It's not for a lack of desire to own all the pretty underthings from the company; it's because she's plus-size and the retailer doesn't offer anything that would fit her. On her page for a petition asking Victoria's Secret to carry plus-sizes, Drew says, "My money and my credit are good enough for them, but the fact that I can only buy items like perfume, lotion, and body spray sends the message that my body is not." Currently circling are are a few similar petitions addressed to Victoria's Secret that I hope begin to convince the lingerie powerhouse that expanding their size range would be beneficial to women everywhere.

While the store does offer panty sizes up to an XL in some styles (none of the "sexier" ones, however) and bras up to a DD, they're still falling short in meeting the demands of many potential customers. The company has been criticized for its lack of diversity in body types as evidenced by the models featured on the runway of their annual fashion show and in their global ad campaigns. Most recently, controversy struck due to their 2014 "Perfect Body" campaign. Victoria's Secret did change this ad, which featured strictly thin models wearing their "Body by Victoria" bras, to bear the title "A Body for Every Body." And the latter tagline was definitely more accurate — provided, unfortunately, that the body in question was not a plus-size one.

Now, it might seem like the women behind these petitions should just shop for their lingerie elsewhere — at retailers that offer plus-size lingerie as part of their lines already. That's all well and good, of course, but Victoria's Secret has a pretty huge slice of the market share. A whole 35 percent of it, in fact. That's right, over one-third of all lingerie sold in the United States bears a VS tag.

The simple fact is that if VS was to expand their line to incorporate a wider variety of sizes, they would be improving access to well-made, fashionable and sexy lingerie to women who've always wanted just that — to plus customers who want to be able to wear what their friends are wearing. It might not seem like a big deal if you're currently clothing yourself in the apparel of all straight-size stores out there, but trust me — it's a pretty big deal to those of us who don't have that liberty.

Just like Drew said in her petition, and as I've said before, the importance of knowing that your body is seen, recognized and validated is immeasurable. Yes, that importance can and should come from many sources besides a lingerie retailer, including from oneself. (I don't need Victoria's Secret to tell me I'm gorgeous, you know?) However, we live in a time — in a place — in which plus-size women are still generally portrayed in the media as being inherently unattractive; our sexuality often being the butt of jokes. So, I cannot help but feel that being able to buy some damned sexy underthings in the same styles as everyone else would be just a little bit progressive. To have size XXXL on a rack with the XS would remind people that we're here, that we exist, and that we, too, are sexy and worthy of those bedazzled bras. Each pair of lacy panties would be a testament to the fact that fat girls like to feel desirable, too.