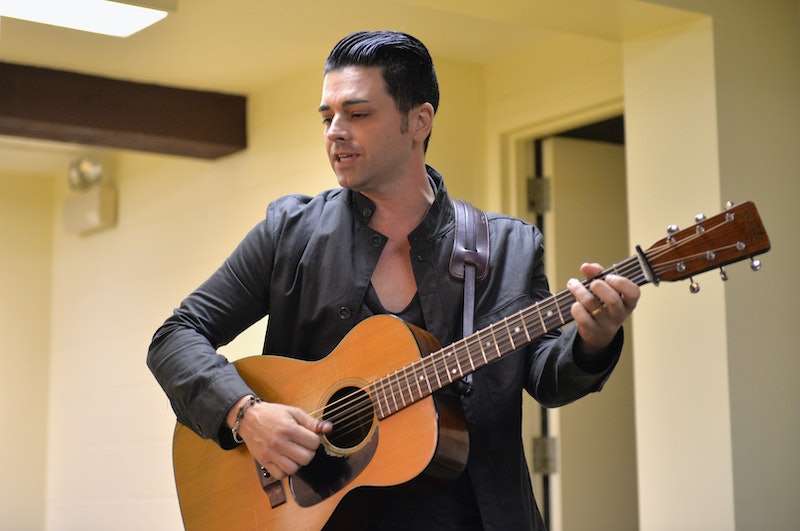 After watching Taylor Swift and Chris Carrabba sing Dashboard Confessional's "Hands Down" with Paramore's Hayley Williams, you probably had a rush of early '00s nostalgia. The memories of Hot Topic t-shirts and blasting "Screaming Infidelities" on your Walkman can knock you off your feet, so you may want to sit down for some more mind-blowing facts about what Carrabba has been up to in the 15 years since Dashboard's debut album, A Swiss Army Romance, came out in 2000. For one, he's married — but you won't find any information about his personal life online, like a true emo artist — and he's taken on other projects through the years. Most of his major albums have surpassed big anniversaries, including one of the more recent ones, Dusk and Summer, hitting 10 years in 2016. Yeah, we're all old.

If you haven't checked out Carrabba's new music, you're in for a treat. Since Dashboard's last album in 2009, Alter the Ending, he's kept busy, and even covered one of Swift's songs "Mean" with his new folk band, Twin Forks. Prepare for your mind to be blown time and time again as more fun facts about him and his latest tunes are revealed below.

Even though he looks almost the same as he did in 2002, the photo above was snapped in 2014. That big smile and slicked-back hair doesn't give away that he was born in 1975.

But He Doesn't Look It — At All

Is Carrabba Married? Yes, But He Doesn't Talk About It

Carrabba allegedly got married in 2004, and Spin talked to him about his secrecy about his private life. "There’s this tricky space now where you risk being perceived as an ass if you’re not willing to tell every detail of your life because fans have never been exposed to someone who won’t," he said in 2009. If you try to find out his wife's name on Google, you just get a bunch of Yahoo! Answers with this reply:

Spin Magazine reported that Carrabba married in 2004, but his publicist refused to comment when asked to confirm it.

When asked about his wife, Carrabba is quoted as saying: "There's a girl I like a lot. I learned long ago not to rush things ... but marriage seems to be the end result of being in a relationship long enough."

Since there's no concrete answer, above is a sweet video of him singing to a mom and her daughter at a charity event.

His band, Twin Forks, had a song featured on Reign in Season 1.

And He Covered Taylor Swift

He says they are big fans of each another.

The solo album, Covered in the Flood, was released exclusively on his 2011 tour and includes covers of the Veronica Mars theme song "We Used to Be Friends," plus "It's the End of the World as We Know It (And I Feel Fine)" and "I'm in Love With a Girl."

...if you know Taylor Swift.

The joint tour kicks off May 29 in Cleveland, OH and marks the first time Dashboard Confessional has toured as a full band since 2008. In the following years, Carrabba did a few acoustic tours, including 2010's 10-year anniversary of The Swiss Army Romance.

More like this
Harry Styles' 'X Factor' Audition Didn’t Start Off As Well As You Thought
By Jake Viswanath
Dan Levy Showed His Mariah Carey Devotion Yet Again With A “Honey” IG Story
By Grace Wehniainen
Now That 'Renaissance' Is Here, Let’s Revisit Beyoncé’s First Solo Album From 2003
By Grace Wehniainen
Victoria Beckham Brought Posh Spice Back In A Very Rare Performance
By El Hunt
Get Even More From Bustle — Sign Up For The Newsletter