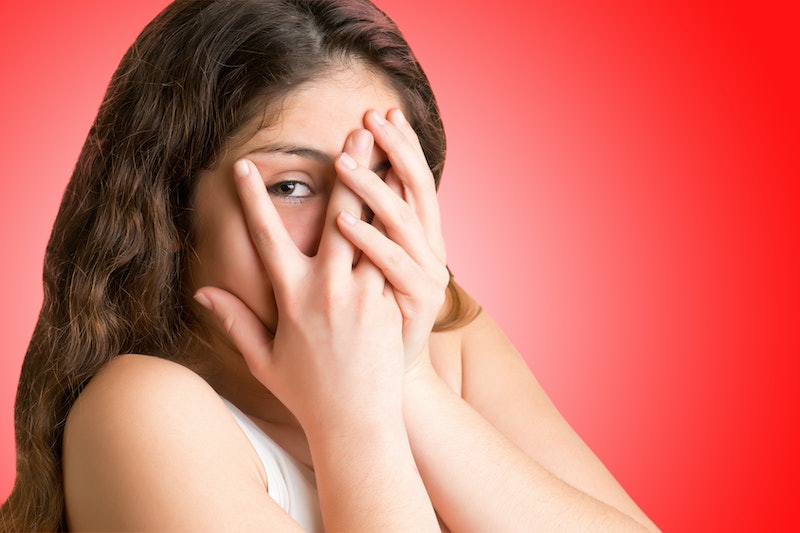 There are lots of things in the world I'd consider myself adequate at — even good at. But one of those skills is definitely not being able to accept a compliment. It's something I've been aware of on some level for a few years now, but it's a habit that I've never really been able to kick. And it's definitely not a unique phenomenon.

Along with saying "sorry" for things we don't really have to be sorry for, we women are just bad at accepting compliments. It's certainly something that plagues most of the ladies I've ever spoken to, no matter how capable and accomplished they actually are. Naturally, this topic came up in conversation with one of the raddest babes I know.

Whilst both of us were on some sort of social media break, my friend Sarah and I were chatting over Google Hangouts, telling the other that we are worthy of certain opportunities that are coming our way and complimenting each other's work as writers. I replied to one of her compliments by saying, "Well, I'm not 'shit-eating-grin-selfie-level famous' though," referring to a hilarious and genius photo of her in her hijab that had gone viral in response to our Prime Minister's archaic stance on women wearing religious head coverings.

None of the compliments I volleyed back at her were false or made up in any way (I'm a 100 percent factual compliment-er over here). I've just been made to feel uncomfortable by compliments my whole life, so I confessed to Sarah that it was something I was trying to change and, no surprise here, she admitted she was trying to do the same. "I'm actively trying to just be like 'aw thanks' when people compliment me period... like, even clothes. I always say something like 'it was on sale,'" she wrote to me.

"Aw thanks" is one of the simplest responses to a compliment that you could give. Seriously, it's two words and two syllables. Actually, "aw" isn't even really a word: It's a sound. We can't even make a sound and say a word when someone tells us we look nice!

Even a simple, "Oh, you're one to talk! Look how amazing you look," is not only graceless, but also cheapens the compliment you're giving the other person. Like, you couldn't think of anything to say so you just told them that they looked good, too? I've been on the receiving end of this and it can make a gal feel like a deflating balloon.

Come on, y'all: We can all do so much better than this. It's not just deflecting, but taking a stab at our appearance in some weird attempt to balance it out. A person I used to know used to reply to compliments with, "OMG thank you, I'm crying. I'm such a troll." Sure, being honest about not feeling our most confident is always welcome, but after you deflect a compliment six times out of 10, it starts to get a little frustrating for the person doling them out. So here are some examples of ways not to accept a compliment:

"Seriously, are you out of it? I look like someone pulled me out of a drain clog."

"This dress is not even that cute. It's like 10 years old and it's practically held together with staples and the tears I cried from it being so hideous."

"Oh, I'm actually terrible at my job compared to you. Like, half a kindergartener could do what I do in a whole day in three hours and you deserve a hundred awards just for breathing."

"Yeah right. If only you saw how much I play Candy Crush. I'm actually a horrible mom. My kid is gonna be in therapy for 100 years."

I know these are exaggerations, but only slightly. If we haven't uttered a version of these things in the past week, we've heard another woman do so. These responses might seem kind of funny — like they allow us to come across as charming in a self-deprecating sort of way — but they're actually getting really old and are harmful to our own self-confidence. They affect the way that we give other girls and women in our lives permission to talk about themselves.

I remember posting a status on Facebook about being one out of 20 young women accepted into a feminist leadership program, winning me a trip to Montreal to participate. It read, "I'm excited to announce that I've been accepted to participate in The ELLE Project in Montreal, along with 19 other amazing feminists." One of my friends congratulated me the next time she saw me, but chuckled and said, "It was so funny the way you worded it, though! You said, '19 other amazing feminists,' and it was like you were calling yourself amazing." My smile fell flat and I felt like I had been punched in the gut. I was so proud of what I had done, and the person I was growing into. I did feel like I was amazing. I was.

For a woman of color, an Indigenous woman, a trans or non-binary person, a fat person, or a disabled person to think that they should be considered "as good as" the small number of women who fit in our incredibly narrow definition of beauty is practically a sin. Other women remind us of this, sure, but men are constantly proving that they see women's confidence as something to be feared. Social experiments have even proved that, in general, they perceive women who accept compliments as threatening.

Approval is a mechanism of control and by saying, "Yeah, I know I look cute, thanks," we're seen as being "full of ourselves" and, in turn, difficult to control. Compliments and confidence aren't just about feeling good; they're about power. And this is why catcalling and negging are both gross things that still exist. Women accepting compliments isn't just frowned upon, but people can actually be violent towards women because of it.

It's pretty understandable, then, why most of us are awful as being able to simply say, "Aw, thanks," but I'm going to try anyway. And when other women say, "Aw, thanks," I'm going to smile and say, "You're welcome," give her a smile, change the subject and mentally cheer her on. There are enough awful things in this world trying to make us feel terrible about the way we look, things we've done, or the things we think we're good at, without enlisting ourselves to help the narrative along or making other women feel bad for trying to compliment us. It's a small victory, but it's a victory all the same. So fight the power, accept a compliment.

More like this
I Tried Kendall Jenner's No-Pants Look As A Plus-Size Woman
By Sarah Chiwaya
Instagram & Facebook May Finally Lift Their Notorious Nudity Ban
By Allie Fasanella
Jameela Jamil Defends Sam Smith After Trolls Body-Shamed Them
By Jake Viswanath
42 Black Owned Fashion & Beauty Brands To Support Today & Always
By Mekita Rivas, Shea Simmons, Kui Mwai and Dominique Norman
Get Even More From Bustle — Sign Up For The Newsletter
From hair trends to relationship advice, our daily newsletter has everything you need to sound like a person who’s on TikTok, even if you aren’t.