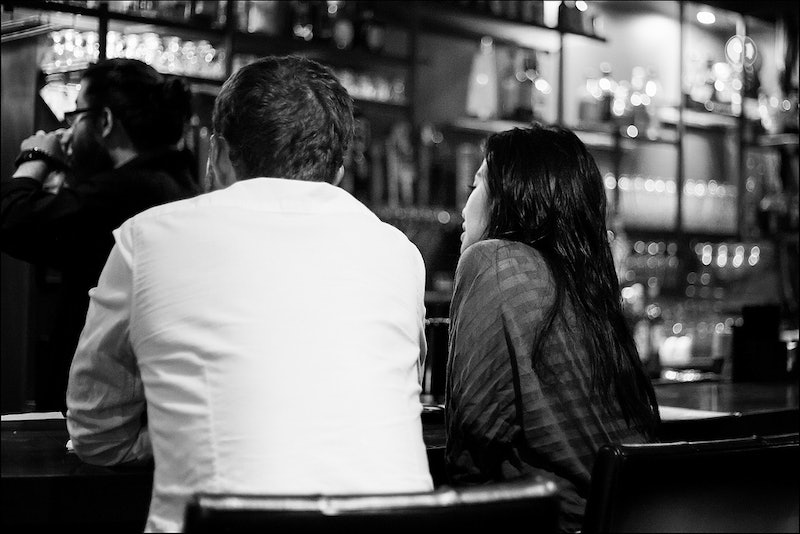 What would you do if I told you there was a browser game you could play for free called Pick Up Artist Simulator? Would you scream and run away in horror? I definitely understand that impulse — it was mine, too — but as it turns out, Pick Up Artist Simulator is not what you think it is. It’s better. Way, way better. Here’s why.

It’s not, you see, an actual pick-up artist simulator (thank goodness). As the Mary Sue put it, it’s “a tongue-in-cheek look at how slimy and transparent these dumb tactics are,” as well as proof “that some of them might get you f***ing maced — and you’d deserve it.” Ayyyyyy-men. Created by UsVsTh3m, it paints PUA behavior in the hideously cartoonish terms it deserves, with a sharp, totally on-point message at the end. Seriously, you guys. I will never, ever understand how anyone could possibly think that “techniques” like negging and kino are the way to anyone’s heart. Or perhaps more accurately, the way into their pants. Either way, it’s as inconceivable as Vizzini thinks pretty much everything is.

Although I do highly suggest heading over to the Pick Up Artist Simulator website to play the game yourself, here’s a blow-by-blow account of what happened when I gave it a shot. Are you ready for this? Here we go:

OMG, you guys. I can’t wait to learn how to pick up chicks. They’re going to be all over us, right?

Courtesy of our handy dandy Pick Up Artist’s Bible, here are the three techniques we’ll be putting into practice today. Gee, they sure sound swell!

Step one: Peacocking. If you’re feeling lazy, you can just hit “shuffle” and leave your would-be pick up artist's look entirely to chance, but, well…where’s the fun in that? You have between four and six options for each of four categories; for our little adventure, let’s give our guy a suit that means business, a hat that screams “party,” a beard he’s probably a little too proud of, and a brightly colored wristband. He sure looks like a winner, doesn’t he?

Look! Hot Babe’s Friend left Hot Babe all alone at the bar! She looks like she wants to be left alone…but who cares? Let’s go hit on her anyway. We only have 10 pick-up points to spend, so let’s start with a little negging, shall we? After telling her she’d look hotter with her hair styled differently and that she’s cute in a weird sort of way, she’s making this face at us:

“Are you trying to neg me?” she asks. Uh oh — it looks like she’s on to us. Do we keep negging, or do we try Kino? Let’s go with one more neg, just to see what happens…

She’s not impressed and clearly doesn’t want to be talking to us — as in, she actually said, “Why are you talking to me?” Okay, then; let’s give Kino a shot:

We touched her shoulder and asked her if she wanted to go somewhere a little quieter…and she pulled away, grimacing, and said, “Ew, no.” She totally wants the D, doesn’t she? (In that “No, she definitely doesn’t” kind of way). Let’s try Kino again:

She recoiled in horror! Yesssss! Now’s the perfect time to ask for her number, right?

After telling her “You can give me your number now, if you really want,” she…laughed? How dare she! But maybe we should see what we should have done differently — y’know, for next time.

This was actually the second time I played through The Pick Up Artist Simulator; the results were the same the first time through — as they should have been — and I’m pretty sure they’ll continue to be the same regardless as to which techniques you use when — also as they should be. All people deserve to be treated with respect; there’s no way to “make” someone like you or find you attractive; and no one “owes” you anything. End of story.

Do you know someone who engages in pick-up artist behavior? Have them play this game — but don’t give away the ending. Just tell them it’s something you think they might dig and see how they react to it. Check it out at UsVsTh3m.