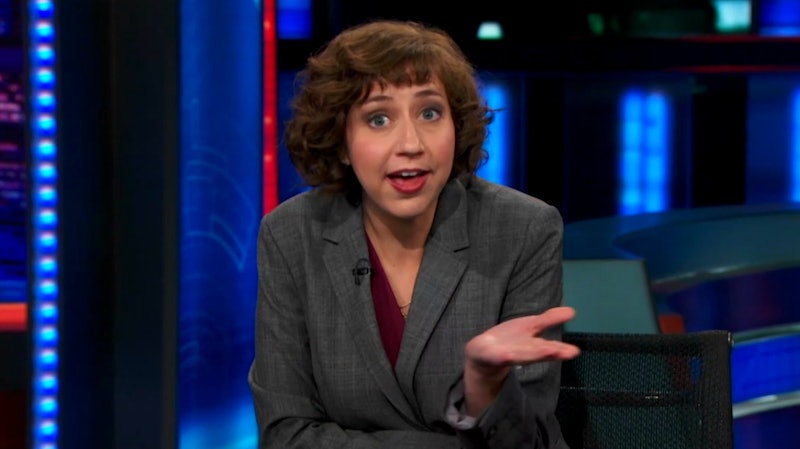 Kristen Schaal just saved Halloween, Charlie Brown. The Daily Show's Women's Issues Correspondent (formerly known as Ms. Whassername on 30 Rock and sometimes known as Louise Belcher on Bob's Burgers) tackled the biggest elephant at the Halloween party: overtly sexy costumes. And she tackled it so well, she just might have put a period at the end of a very, very long conversation about a costume industry that somehow determined that if you put cleavage on SpongeBob SquarePants, he's just about the sexiest thing alive (or not alive? I'm not sure how sea sponges work).

With one swift segment, Schaal points out the glaring gap between costumes for women and costumes for men — her brand new line of sexy men's costumes includes "Sexy Movie Producer Who Hires Women Over 40 For Meaningful Age-Appropriate Roles." It's some dude in a sweater. As Schaal points out, men's costumes get to be sexy for the content — even Indiana Jones as a costume is inherently sexy without adding shirtlessness and uncomfortably tight, package-hugging pants.

Turning that same lens back on the ladies, Schaal introduces a new, more straightforward costume for women: a giant vagina. Because while you could don an outfit that leaves almost nothing to the imagination in the name of Old Hallows Eve, why not just go straight for the real meaning: sex. And therein lies the problem with super sexy Halloween costumes. It's not that the women wearing them are "sluts" or some other degrading term. It's not that seeing a "Sexy Care Bear" costume might ruin your childhood just a wee bit. It's that the costume industry that proliferates this lopsided expression of Halloween fun has basically reduced women to a walking lumps of sex. And I suppose one way to get back at them would be to dress up as a giant vagina. Kristen Schaal: 1,000. Sexist Costume Industry: Nada.