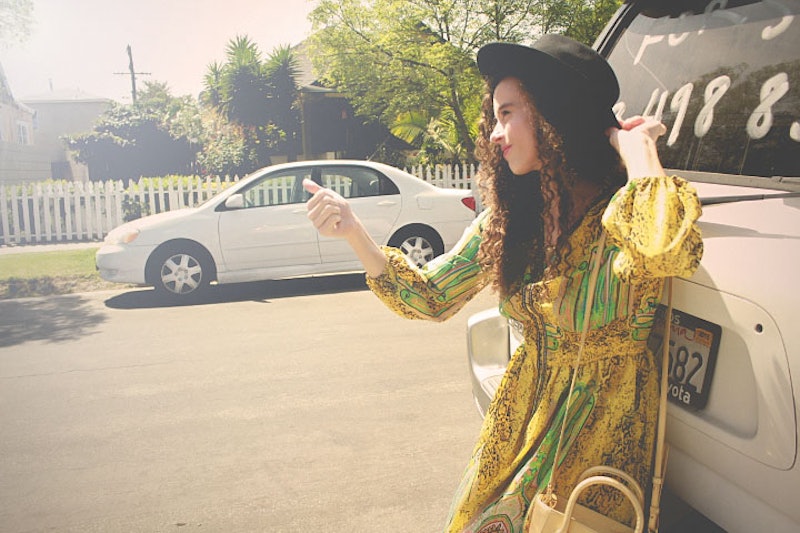 If everyone in your friend group bought tickets to Coachella but somehow you got "left off" the memo because Patricia is annoyed that James told her you subtly implied that Rosemary's new pixie cut looked like a wet poodle (or, you know, buying a ticket to go across the country for some bands wasn't in your Q2 budget for 2015), there's only one thing to do, my friend. FAKE IT. I want you to pull up those tiny denim cut-offs, slap a metallic tattoo on your wrist, get a flower crown by whatever means necessary, and lie through your teeth on Twitter. If anyone asks, you were TOTALLY AT COACHELLA. And you dressed the part.

Here's how to maintain the subterfuge.

1. When your friends at Coachella invite you to that VIP afterparty, say, "I can't tonight, I have sunstroke."

Are your hip cool popular friends blowing up your phone with invites to Coachella's most VIP parties? Repeat after me: You'd love to join them, but you have sunstroke. You're dehydrated. You'll probably just crash in your tent tonight and sip coconut water so you can be on your A-Game tomorrow, when, um, that cool band from the McDonalds commercial is playing. The desert is CRAZY HOT, guys!

2. Dance like no one is watching and try not to cry when no one actually watches.

Coachella is all about swaying under the open sky, raising your arms to embrace Mother Sun, and frolicking in the grass with your jelly sandals as the indiest bands of popular radio croon their love songs just for you. Or so they tell me. Don't worry, my ticketless darling — you too can dance with the abandon of a thousand hippies. Just turn up the volume on your iPhone, place it gently on a nearby car, and have yourself a merry little dance party in the middle of the street. When children inevitably stare, pretend you're in the VIP area and they're just common, jealous plebeians.

3. Don't have any sketchy friends on hand to sell you the hard stuff? Amp yourself up on caffeine!

Hugs, not drugs!!!!! Right guys?! Right?? If you want to get in that music festival spirit, but your friendly local "vitamin dealer" is at Coachella along with all the other losers who didn't invite you, just drink two lattes!!! Or three or four or five!!! You'll be feeling great in no time!!!!

4. Pretend you're dehydrated and ask a hot stranger for water.

Everyone else is probably meeting their soulmates at Coachella RIGHT NOW, BUT WHATEVER! While all your friends are bonding with cute hipster-hippie hybrids over analog music or joking with manic pixie dream bros about the absurdity of the food truck prices, you've gotta make due with what you've got: random people on the street! Approach the hottest rando you can find and beg for a sip of his or her Smartwater. Gasp, "I've just been dancing under the hot sun for hours. Music makes me MOVE!" If they looks at you strangely, run away — but not before taking a sneaky photo of him and hashtagging it #Coachellacuties. Your social media deception will not be tamed!

People pretend that Coachella is all about the "party" and the "streetstyle blogs" and the "cool friends who didn't invite you," but that's just what the Establishment wants you to believe, moonchild! Coachella is actually all about getting in touch with your True Inner Self, and that sort of enlightened state can only be achieved by two things: wearing accessories vaguely reminiscent of another culture's religious rituals, and staring into space. Bonus points if you Instagram a wise-looking selfie and hashtag it #Coachellathoughts.

All the people you thought were your friends might be camping out under the stars, but you can have a camping experience, too, for the low low price of a single sheet! Just stretch it out over your bed and curl up under it. When you're camping alone, no one can hear you cry!

Desperate times call for desperate measures. If Instagram says you were there, who's to say you weren't there? What is "there," anyway? As Gertrude Stein says, "There is no there there." Yell that at your friends if they text you something like, "Bro, why are you lying?"

8. Impress a cutie with your desert yoga!