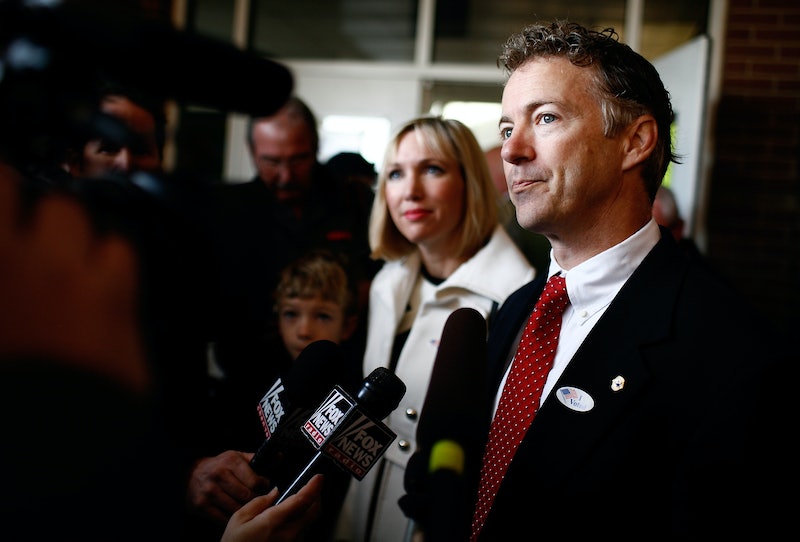 Since taking office in 2010, Rand Paul has repeatedly said he is not the same politician as his libertarian father, Ron Paul. One prime example is the case of marijuana legalization. While young voters were excited about the senior Paul's call to fully decriminalize marijuana in 2012, the junior senator from Kentucky — and, as of Tuesday morning, 2016 presidential candidate — has taken a more conservative approach. Though Rand Paul says no to marijuana legalization, what he is interested in doing is relaxing punishments for people who possess pot.

Paul's stance on legal weed goes a step further than his Republican peers, such as Texas Sen. Ted Cruz and former Florida governor Jeb Bush, who have primarily framed legalization as a states' rights issue. While Paul has said the issue of legalization should be kept out of federal hands, he also has been more vocal about flaws in the war on drugs, saying current laws have unnecessarily burdened the country's prison system by putting nonviolent criminals away for decades and usually at high costs. The average annual cost of incarcerating a federal inmate was roughly $28,000 in 2011. For states and cities, that number can skyrocket, with places like New York paying $168,000 for each inmate in 2012.

Last month, Paul, along with Democratic Sens. Cory Booker and Kirsten Gillibrand, unveiled a drug reform package that would eliminate federal prosecution for patients whose states have legalized medical marijuana. Paul has also pushed to legalize hemp, a less potent version of cannabis, for economic reasons, saying it could create a new market for crops, health food, oil, and apparel.

But when it comes to his personal views on marijuana, Paul stands firm at no. In an interview with Fox News last March, he said marijuana was "a bad thing to do" because he believed it took away people's incentives to work and be productive. He shifted the discussion back to decriminalizing marijuana and pointed to past presidents as prime examples for why the government shouldn't issue decades-long sentences for nonviolent crimes.

Look, the last two presidents could conceivably have been put in jail for their drug use, and I really think, you know, look what would have happened, it would have ruined their lives. They got lucky, but a lot of poor kids, particularly in the inner city, don’t get lucky. They don’t have good attorneys, and they go to jail for these things and I think it’s a big mistake.

In 2010, GQ claimed that during Paul's two-and-a-half years at Baylor University — the politician admittedly dropped out after he was admitted to Duke Medical School — a young "Randy" allegedly smoked pot with fellow members of a secret society of pranksters. Paul never acknowledged the claims made by the men's magazine. But with 46 percent of Americans supporting marijuana's full legalization, according to a Reuters/Ipsos poll, and as the race ramps up in coming months, Paul may be even more willing to modify his marijuana stance. After all, his relaxed drug views could help distinguish him from other Republican presidential hopefuls in what will certainly be a crowded field.