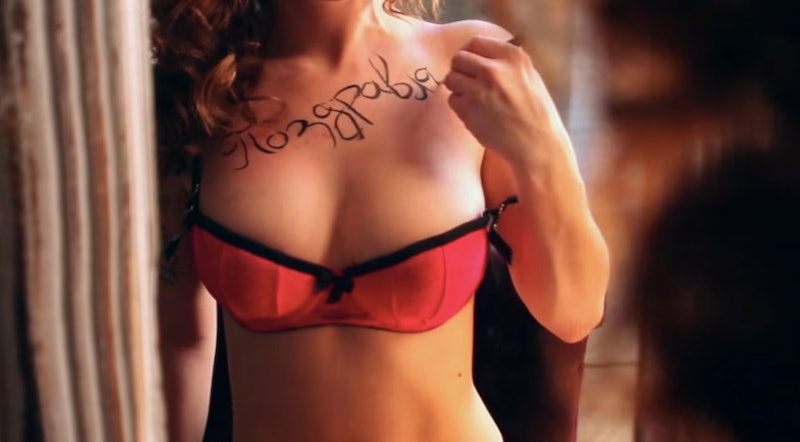 Just when you thought Russia couldn't get any weirder, the country becomes responsible for a tacky, not to mention completely sexist and objectifying advertising service. The new Russian ad company, "Tittygram" allows clients to advertise on a woman's breasts. Cue giant eye roll. Look: I'm not going to pretend that we should be on our high horse here. I mean... Have you seen advertising in the U.S. lately? It might not be as blatant as writing an ad straight across a woman's chest, but the advertising in this country is certainly not without reproach. We still use women's bodies in overly sexualized and sexist scenarios in order to shill products. Tittygram, I suppose, is just a bit more upfront about it.

The fact that the company is coming out of Russia is also cause for concern, giving Russia's gross human rights violations and rampant, internationally attention-getting sexism. To put it in perspective, we might have a perverted ad culture here, but we're not beating and incarcerating homosexuals either. (Not that our treatment of the LGBTQ community is always perfect, but we have the freedom sanctioned by our government to fight against bigotry, and we are.) And for every airbrushed female body on a billboard you might see in Times Square, there's a male washboard abdominal you could grate cheese on alongside it. I'm going to go out on a limb and say no one in Russia is going to start a company called "Ballboard", where you can write your message on male genitalia, and if they did, they would be publicly and aggressively persecuted. Okay, that's not so much of a limb as it is a measured and educated hypothesis. Also, that's an exceedingly clever name for a company, so you're welcome to whomever takes it and runs with it.

The Tittygram site says simply, "ORDER MESSAGE ON TITS", and for $7.50 ("Total of 395 rubles, cheaper than a couple of beers!") you can do just that (although, please don't). One of the weirder aspects of this is the promotional video, which shows a well-endowed woman in a bra writing a message across her boobs, while music that sounds like it was pulled from an educational children's show plays:

To contextualize this in the realm of Russian advertising, here are some more deeply sexist, very twisted ads to come out of the country. If you weren't convinced that Tittygram was evidence of a broken gender dynamic, coupled with these ads, you should have no doubt left (basically none of this is safe for work, so watch accordingly):

3. This PSA for seatbelts

This video features a woman threatening to divorce her husband while they're driving, causing him to crash the car and murder her, because she is not wearing a seatbelt and obviously deserves to be murdered for wanting to leave him.

Which, unbelievably, isn't for a semi-naked female dance troupe.

They're at least pretending to sell cars.

More like this
Iran Has Issued A Death Sentence Over Mahsa Amini Protests
By Catharina Cheung, Darshita Goyal and Maxine Harrison
10 Thanksgiving Alternatives You Can Celebrate This Month
By Katie Mitchell
Amanda Gorman Shared A Powerful Message On Meghan Markle’s Penultimate Podcast
By Darshita Goyal
Bustle Newsletter: November 18, 2022
By Bustle Editors
Get Even More From Bustle — Sign Up For The Newsletter