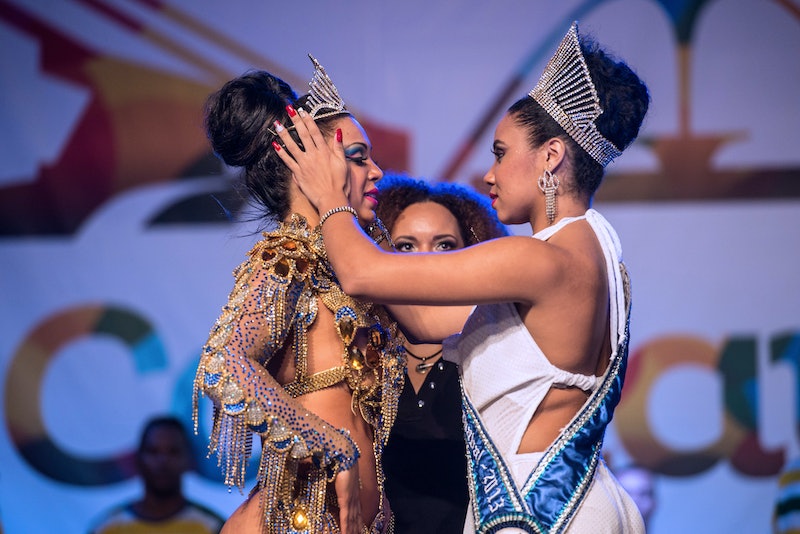 Given how quickly slang terms can appear, it's perhaps not surprising that a lot of us have recently stumbled upon the phrase "trap queen." But what is a trap queen, anyway? Have no fear: I'm here to provide you with all the answers you seek. Read on for the lowdown on this ubiquitous phrase, as well as a handy guide to figuring out whether you're a trap queen yourself.

Unless you actively refuse to consume any type of media ever, you've probably heard the recently popular song "Trap Queen" by Fetty Wap. A revolutionary love ballad, "Trap Queen" is about girls, cars, drugs, and liquid cash; more importantly, though, the featured female isn't just a "hoe" or "thot," but is actually an integral and respected part of both the song and Fetty's life. The song was released in early 2014, but it didn't become particularly popular until November when college students at frat parties and hip-hop radio stations alike started to discover the sonic orgasm made possible by the producer, Tony Fadd. The song became so popular that earlier this year, "Trap Queen" was remixed by French Montana, as well as by SoMo in one of my favorite renditions of the song.

So, back to our original question: What — or perhaps more accurately, who — is a trap queen? As a starting point, I turned to Urban Dictionary, my generation's most trusted resource for understanding colloquialisms that we might be behind on. Here's my favorite Urban Dictionary definition of "trap queen":

A witty or street-smart female, usually with an urban flavor or appeal, who is loyal and resourceful . Baddest female superior to petty affairs and bitches. She is down to do what is needed for her friends, family, and man. Capable of sass, class, and trash. She enjoys hip-hop, urban and trap culture.

Like the definition suggests, a trap queen is a cosmopolitan, street-savvy, versatile young woman who prioritizes her loved ones, her passions, and, of course, trap music.

Now let's turn to Fetty to see what it takes specifically to be able to call yourself or someone you know a trap queen, based of the lyrics of his love ballad:

From the bridge: "We just set a goal, talking matching Lambos."

From this line, we can discern that a trap queen must be passionate and goal oriented, never settling for less.

From the bridge: "Man I swear I love her how she work the damn pole."

The ideal trap queen is confident in what she does and how she does it. No exceptions!

A trap queen is down for anything, whether it's shopping, hanging out, or, if you're Fetty's trap, queen cooking pies! It's worth noting that "pie" is a slang term for a kilogram of cocaine... but there's nothing wrong with actual pie, too.

From a verse: "She ain't wanting nothing because I got her everything."

Trap queens don't mind being spoiled; in fact, they welcome it, because even though they're fully capable of supporting themselves and setting their own goals, there's nothing wrong with being treated to some diamonds or cars by someone else occasionally, as well.

Most of us probably know someone who could fit the definition of a trap queen, are trap queens ourselves, or are looking to find one to enhance our lives. I know I am:

Check out the full music video here now that you know what embodying the trap queen lifestyle is all about:

More like this
18 Hinge Prompt Answers To Try If You’re Looking For Something Casual
By Lexi Inks
How Ovulation Affects Your Sense Of Smell, Libido, & More
By JR Thorpe and Lexi Inks
Britney Spears Shares & Deletes Photos Of Justin Timberlake From 22 Years Ago
By Jake Viswanath
20 Years Ago, J.Lo Was Supposed To Kiss Madonna With Britney At The VMAs
By Jake Viswanath
Get Even More From Bustle — Sign Up For The Newsletter