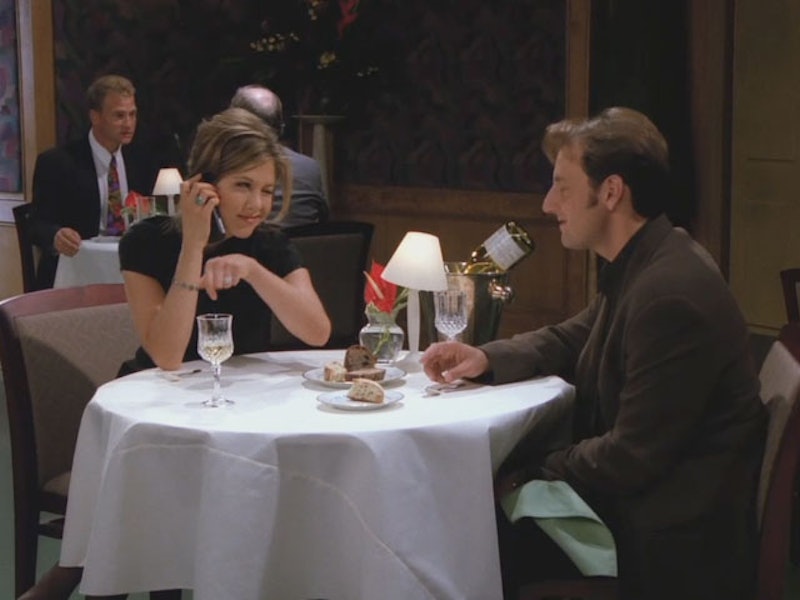 If I was single and a 30-year-old man asked me to "hang out," I would say no. It's something I definitely did in my early-20s. I'd kiss a guy at a party or in a bar, and later be invited to "hang" with him and his friends, which always involved a lot of aimlessness. While it's great to see someone in their natural social habitat, as you get older, and each new relationship has the potential to, you know, be THE relationship, it becomes more important to measure someone in relation to you and in a socially communal environment, so going on dates is a better choice. Obviously, it's always important to be able to socialize together, but when you're starting out with someone new, open to the chance that they could be THE ONE, "hanging out" just isn't a priority. Finding out if they make YOU laugh, if they're kind to YOU, and engaging to YOU is far more important than group banter, or being caught in small talk with their best friend's roommates sister's boyfriend.

Since I started properly dating, as in, going on dates, I've loved it. It definitely requires more vulnerability and sometimes infinitely more awkwardness, but it's generally a much better introduction to someone than just hanging out. Dating isn't always about starting at your "most authentic self", especially considering that, if the date works out, you're going to be your authentic hanging selves for the rest of your lives. Starting off with a little bit of old-fashioned romance might seem dorky, but I think it's really beneficial to getting to know someone, and part of a process of growing companionship. Here's why you should date, instead of just "hanging out":

1. There are fewer distractions

When you're just "hanging out" with someone, there are potentially a lot of distractions. It could be other friends, if the hang is with a group, or things like TV or video games (because a lot of "hanging" revolves around watching Netflix for some reason, probably because "hanging out" is code for "putting ourselves in a situation that is most advantageous for possibly having sex while going through as little effort as possible" aka, Netflix). Being so casual leaves a lot of room to distract you and the person you're dating from each other. But when you're on an actual date, it's all about the two of you. Whether you're having a drink or dinner, you wont be sidetracked by other stimuli, and you'll be able to commit your full focus to one another, for better or worse.

On a date, you're generally going to be on a pretty level playing field. In a public place, just the two of you, both with nothing familiar to cling to. "Hanging", on the other hand, is generally done in one person's comfort zone, whether it be in a group of their friends, or at their home. That can lead to one person feeling much less awkward and much more in control than the other, who is not only in a foreign environment, but who is the only one being forced into a challenging situation. Dating ensures that both parties start out with exactly the same amount of anxiety, which seems much more fair.

Sure, there's a lot of stress surrounding dating, but it's also a whole lot of fun. And it's not just the date! It's the lead-up to the date too: Deciding where to go, what to wear and talking about it with your friends until you've exhausted every possible scenario. The date itself, being based on an activity like drinking or eating, is going to be way more fun than sitting on the couch watching a movie or trying to ingratiate yourself with a group of someone's friend (especially when you don't even know the person you're dating that well!). There's all the flirtation, the will-we-won't-we kiss moments, and hopefully fireworks. The ceremony of it, the cuteness, the anticipation—all of it is much more fun than the casual carelessness of "hanging".

4. It shows a level of care

Dedicating an evening to one person shows that you're invested. A date, as opposed to a hang, shows that you both care enough about spending time together to actually spend time together. It doesn't mean that you're in love or your going to get married or anything, but it's just that extra little bit of effort that says, "Hey, I like you, and I am going to put in 100% to see if I REALLY like you." Hanging is kind of nonchalant and noncommittal, and at the beginning of a relationship, shows a lack of desire to put an actual effort in, which isn't the greatest foot to start on. I'm not saying hanging is always a sign that someone doesn't care—sometimes it's just a preference for the casual or our of shyness—but even a habitual hanger outer should like you enough to dedicate some proper alone time with you in a setting that says, "Treat yo self" It's not just for you, but for the both of you!

5. You can really talk and really listen

Sitting across from one another in a date situation means that you both get to really talk, and you can both really listen. When you're just "hanging out", conversation can become meandering and irrelevant, which is fabulous when you already know someone, but which can definitely make it difficult to get to know someone.

Back when I was single, I went into every date thinking, "This could be my last first date ever." In complete honesty, 99% of the dates I went on didn't even result in a second date, but that might just be because I'm immensely difficult to please. But then I met someone, and I'm glad the first time we went out was on a proper date, because if we had've just hung out in a group, the romance of the story would have been lost. As it happens, we had a lovely dinner, drinks and conversation, and now, comfortably in a relationship together, we have a great story to tell, and a wonderful memory of how our relationship began. Romance, ultimately, isn't going to hold a relationship together in the long-term, but a little bit of magic at the start can be a really beautiful start to a long term bond.

More like this
12 Ways You're Sabotaging Your Love Life
By Teresa Newsome and Lexi Inks
The Best Time To Date After A Breakup, According To Experts
By Bustle Editors
'Indian Matchmaking's Arshneel Is Keeping His Potential Courtship With Rinkle Private
By Radhika Menon
Nadia's Breakups On 'Indian Matchmaking' Haven’t Stopped Her Search For A Husband
By Amanda Whiting and Brad Witter
Get Even More From Bustle — Sign Up For The Newsletter