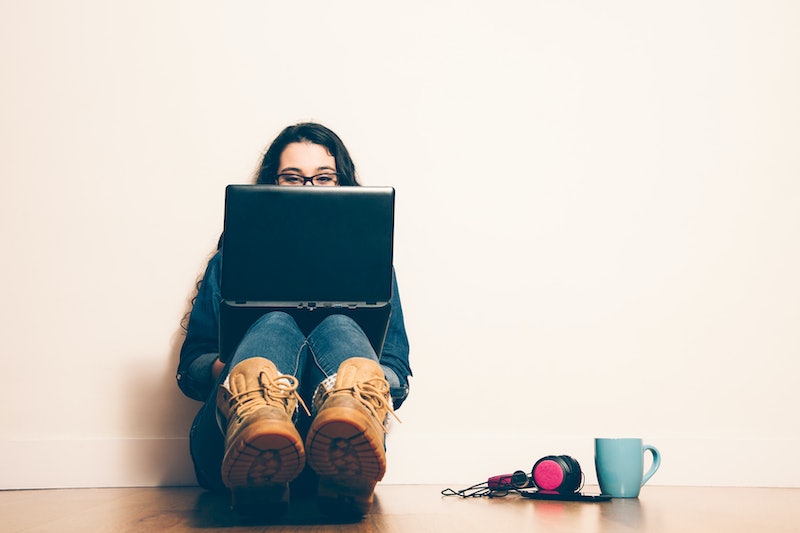 So you’re back on the market. Whether you’re newly out of a relationship or dipping your toe back into the proverbial dating pool after some time on the sidelines, dating in general can be overwhelming — and online dating is confusing at best. I spent a hot minute on OkCupid last year, and though I would certainly claim no unequivocal proficiency at online dating, I figured out a thing or two while being newly single and online dating.

As such, I have somehow become the resident dating guru for two friends who are just going on their first OkCupid dates. It's been fun to assist in profile-creation, field live texts from their dates, and help vet unsuitable mates by scanning photos and reading between the lines. (Hint: If they're holding a drink in every shot, they might not be the one.)

In any event, I picked up a few rules of the online dating road in my short-lived and relatively uneventful time on OkCupid, and I'm pretty stoked about sharing them with my single friends (and the internet at large), since I'm not about to use these principles for my own good. Here's what the newly single need to know about online dating.

When I first starting dating again, this dude kindly pointed out to me that I had "no game." Well, thank you, sir. He was right, though: I'd been off the market for six years, and consequently had no idea how to date. When I told him that I didn't want to play games, he corrected me, saying, "It's not about playing games. It's about having game." Touché. If you're doing your own thing, it becomes second nature to wait a little while before responding. So slow your roll and slow-message.

Logging in one or two times a day will keep things in check — and will make it easier to do Suggestion #1.

3. Meet right away — do not get sucked into a long exchange of messages.

You'll know within a few minutes of meeting whether you'll want to see this person again. Many have good message game, but chemistry doesn't translate into words. Your message mate might profess a love of Raymond Carver and macchiatos equal only to yours, but if pheromones don't fly when you meet, it's best to know sooner rather than later.

4. Obliterate any expectations whatsoever, no matter how great the emails have been.

There's a much better chance of bypassing any outsized expectations by meeting early on. That said, if there's been a flurry of messages better than the letters of Elizabeth Barrett and Robert Browning, try to divorce yourself from presuming anything more than shared cleverness and go in without attachment.

5. Don't meet for anything but a coffee or a drink on your first date.

That means no dinner, no movies, no shows, no ice skating, no tandem dog walks, no walks on the beach and absolutely no meals. Trust me. If you absolutely adore the guy or girl over a cortado or a Pimm’s cup — wonderful. All the more reason for a second date. Or, if the mood strikes, sips can always turn into sups — but if you’re tucking into a five-course meal with an awkward person with whom you have nothing in common, it’s going to be a long night.

6. If a date is weird or it’s clear that you have zero chemistry, it’s totally fine to get up after a few minutes, thank them for their time, and GTFO.

I could usually tell within five minutes of meeting someone whether we were a good match, but I always felt bad about bailing. That said, there’s nothing wrong with being frank, saying, “Thanks for meeting up, but I’m not feeling this,” and bouncing. Don’t bother to make up some transparent excuse about a friend in distress or a forgotten, starving pet. It’s more empowering and less awkward to be honest — and, who knows, your date might be feeling the same way.

7. Most first dates will also be last dates — and that is totally OK.

If your initial messages convinced you that you were destined to ride off into the sunset with this person, but upon meeting you're about as attracted to them as your great uncle Bob, it's fine to cut your losses and move on. Even if you're into your date, there's a chance he or she might not want to see you again. It's a numbers game, and if you get a "no," say thank you and move on.

8. People will send warm, friendly, enticing messages — only to not write back to your response, no matter how witty and well-written it was.

I've been seeing this a lot lately with my friends on OkCupid. I'm not sure why this is, but there are a million reasons it could happen, and I wouldn't give it much thought. They could be dating someone else. Or distracted with work. Or fed up with dating online. Or stuck under something heavy. And on and on. Which brings me to...

9. Even if the opening message you received seems tailor-made for you, there’s a good chance it’s just a smartly-tweaked version of a blanket message.

So don't labor over a response. Dash off something pithy, answer any questions, fire off a couple of your own, and keep the message to a paragraph at most. Also, always feel free to send the first message.

10. Remember that online is not the only way — don't forget that people meet in real life every day, so go to that yoga class/poetry reading/birthday party, and stay open.

As my best friend said, "Do you leave your apartment? Yes? Then you'll meet someone." It's true: just when you least expect it, you'll stumble across someone wonderful. It's impossible to say whether it'll be online or off, but in the meantime, have fun with this. If you're not enjoying it, what's the point?