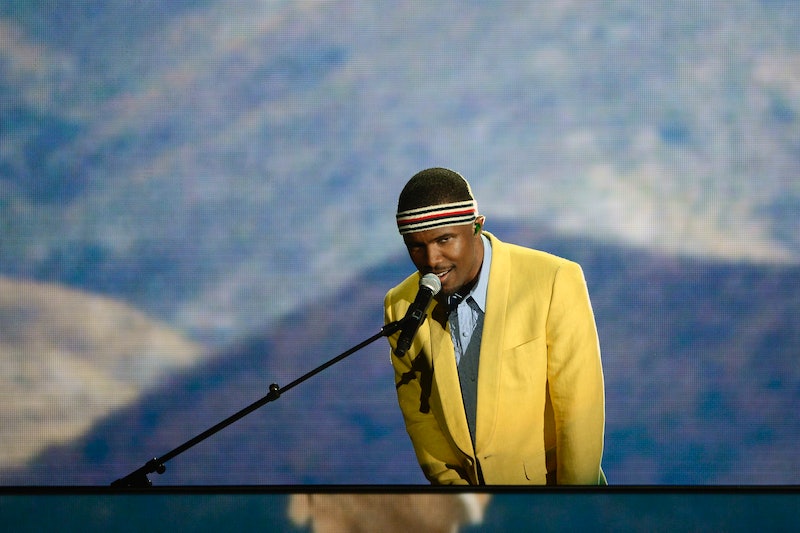 Christmas really is coming in July this year. You see, Frank Ocean is set to drop a brand-new album this summer, and it will most definitely be one of the most talked about releases of the year. The prolific singer-songwriter/rapper made an announcement on his website on Tuesday by posting an image of himself holding a magazine that reads, “#ISSUE1 #ALBUM3 #JULY2015 #BOYSDONTCRY.” The album, which is rumored to be titled Boys Don't Cry, is the highly anticipated follow-up to 2012's Channel Orange. His last release earned him high critical praise, including a Grammy for Best Urban Contemporary Album. Channel Orange made huge waves for its gut-wrenchingly honest and personal lyrics, musical versatility, and its strange but beautiful originality. He's got a lot to live up to, but I have the utmost faith he'll deliver the goods. And then some.

Since releasing Channel Orange, Ocean has laid relatively low — except for his appearances on Queen Bey's earth-shattering secret album, as well as Jay-Z's Magna Carta Holy Grail, and the tribute to Aaliyah Ocean recorded in honor of the last singer's 36th birthday. You know, just those small items. Ocean also released the atmospheric and intense single "Memrise" at the end of last year. Needless to say, the music world is more than ready for the return of the artist that is Frank Ocean.

Here are some burning questions I have about the release:

Will It Have a Special Tidal-Only Version?

Ocean posted on his website below the photo, “I got two versions. I got twoooo versions.” With such close professional ties to Jay and Bey, I wouldn't be surprised if Ocean will drop a few bonus tracks for Tidal users.

Who Will Collaborate On the Album?

Channel Orange featured the likes of John Mayer, André 3000, and Earl Sweatshirt. With such diversity and range in his guests, Frank Ocean could really bring in almost anyone and make it work. I, for one, would go crazy for Janelle Monáe on the album. They would make beautiful, gender-bending music together.

Will Frank Ocean Make Any Statements About LGBTQ Rights On the Album?

Right after the release of Channel Orange, Ocean penned a heartfelt coming out letter on his blog about a relationship he had with another man when he was 19. It will be fascinating to see whether or not he writes about those experiences, or the lives and rights of the LGBTQ community, after releasing this next album.

How Will He Release The Album?

Nowadays, you need to have a secret release or pay iTunes to automatically download your album into everyone's libraries to make headlines. Then again, I have a feeling that Ocean might stray from the flashy pomp and circumstance and just let the music speak for itself.

When Will He Go On Tour?

Please let it be as soon as the album drops.