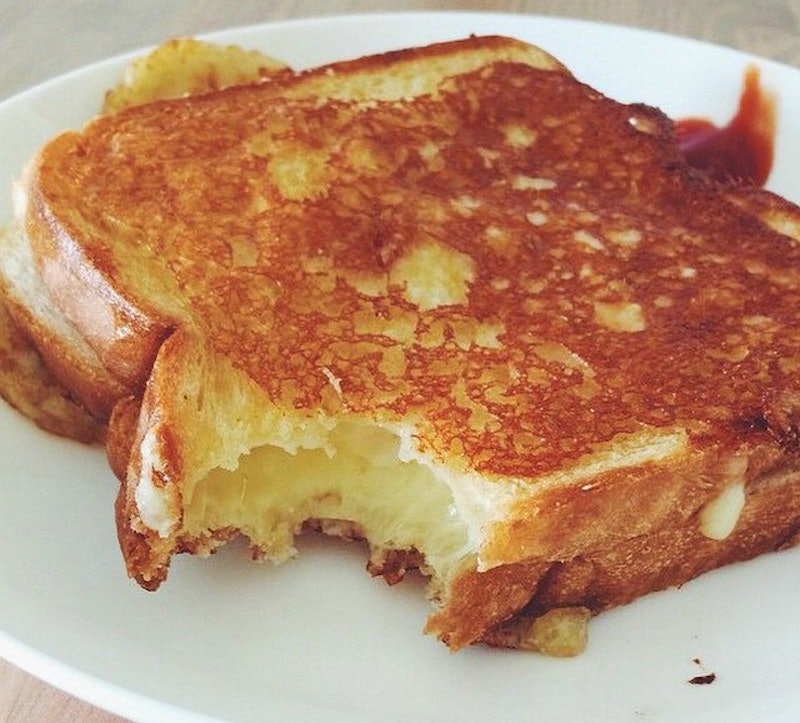 Not only is it National Grilled Cheese month, but April 12 marks the holiest of days, when we rejoice in the glory of one of our blessed culinary traditions: National Grilled Cheese Day. As if the food itself doesn't warrant enough celebration all on its own, Skout surveyed 4,600 of its users to gain insight into the personality traits possessed by cheese believers vs. the unholy dissenters, and the results confirmed what we all should have already assumed: people who love grilled cheese have more sex.

What do you want out of a romantic relationship — do you want to live your best life? Do you care about your happiness? I don't know how you feel, but I can't hope for love and respect from someone who doesn't love and respect themselves. And if someone doesn't let themselves enjoy the warmth and comfort of a homemade grilled cheese sandwich, I really have to question their values, and maybe their humanity in general?

We've already discussed the important symbolism of cheese in our romantic relationships before, so we cannot overstate how crucial it is that you take these highly scientific survey results seriously in your romantic decision-making. So for your own good, let's explore why cheese lovers make the best romantic partners:

1. They have better sex lives.

2. They are more charitable.

I don't know about you, but I think one of the most important qualities that a long term partner should have is a sense of empathy with their fellow humans and a desire to act on that empathy. So how convenient to know that 81 percent of grilled cheese sandwich supporters have volunteered their time and donated food, money, and supplies to various charitable causes. It looks like only 66 percent of grilled cheese discriminators have ever cared about another human being more than themselves in their entire lives, while the other 34 percent are selfish monsters. I'm not trying to be controversial, you guys. I'm only doing science.

3. They'll take you on a romantic getaway.

Don't believe me? Just take a look at The Patron Saint of Cheese Appreciation, Liz Lemon, created and performed by Tina Fey, the comedy goddess herself.

How could anyone be more chill than a grilled cheese sandwich fan? It's just bread and cheese. No over-the-top theatrics 'cause who has time for that. If you're all about the relaxed, drama-free lifestyle, then a grilled cheese lover is exactly who Mary J. Blige would want you to end up with.

You know what, though? Being low-maintenance doesn't mean they're not fun and creative. You can add pesto to a grilled cheese, figs and honey to a cheese plate, pineapple to a cheese pizza. There are over 2,000 varieties of cheese. The options are endless. Can you even imagine all the ways that could translate into a relationship? You'll never get bored again with that kind of romantic suitor.

Cheese is an excellent source of protein and calcium, which means your mozzarella-loving significant other is no weakling.

Sleep affects relationships — especially when you're not getting enough of it. And guess what? Sweet dreams are made of CHEESE. Cheese helps you sleep, so you don't have to worry about a partner tossing or turning or using their laptop while you're trying to get some shut eye.

Facts are facts, y'all. Now, pass the cheese.