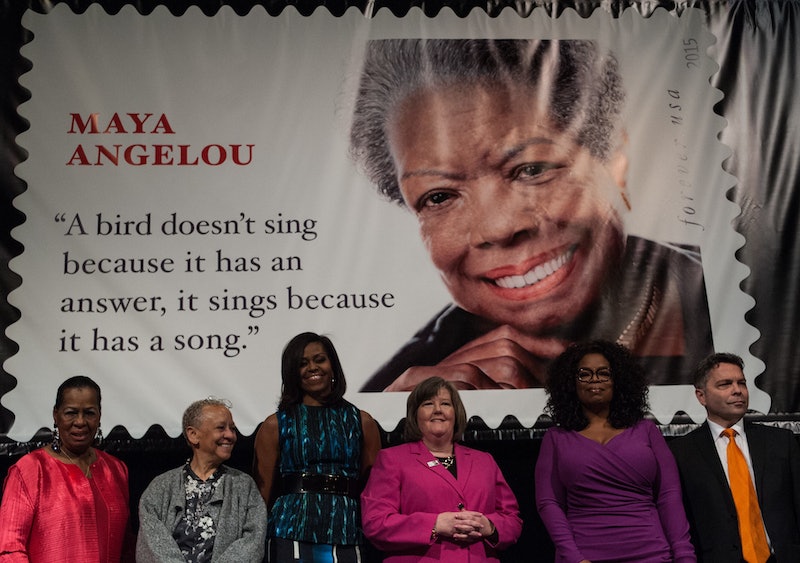 Let's start at the beginning: On March 4, the USPS revealed the new Angelou "Forever" stamp bearing a picture of the writer with the quote, "A bird doesn't sing because it has an answer, it sings because it has a song." It's a gorgeous sentiment — something that sounds right up Angelou's alley. In fact, it's been widely attributed to her; President Obama even gave her credit for the words during his presentation of the 2013 National Medal of Arts and National Humanities Medal. But the day before the stamp was to be unveiled, Anglund, the 89-year-old children's book author, confirmed the quote as hers, saying it originally appeared with one slight pronoun tweak in her 1967 book of poems, A Cup of Sun.

Because Angelou has been associated with the quote for so long, a spokesperson for the USPS said he didn't know about Anglund's original quote, and wrote in an email that they would have gone a different route had they known. I would hope so! Maybe one of these 10 Maya Angelou quotes would have done the trick.

More like this
14 Scary Campfire Stories To Tell Your Friends
By Charlotte Ahlin and Kaitlyn Wylde
Romance Authors Are Mobilizing For Reproductive Rights
By Natalia Perez-Gonzalez
Constance Wu On Self-Doubt, Family Drama, & Her Sister's Unwavering Support
By Constance Wu
Alan Rickman's Diary Reveals Why He Considered Leaving 'Harry Potter'
By Darshita Goyal
Get Even More From Bustle — Sign Up For The Newsletter