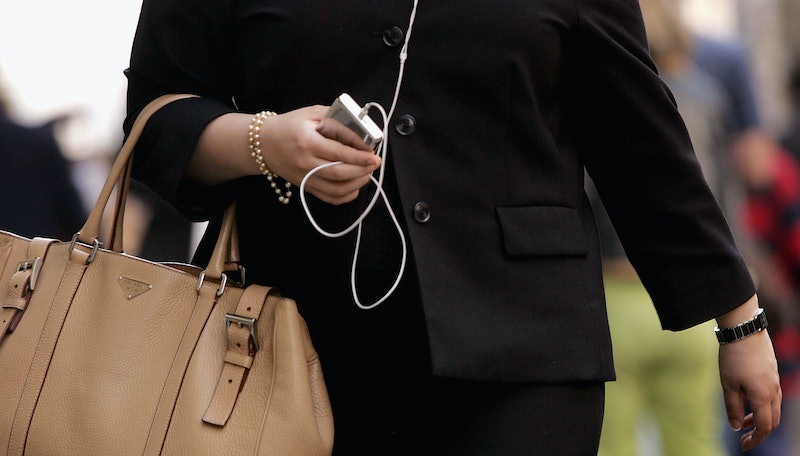 Ever got a song stuck in your head, driving you mad for days or even weeks on end? I feel your frustration — and you're absolutely not alone. One survey revealed that 92 percent of us suffer from getting songs stuck in our heads, and it's an area of burgeoning study, both for scientists, who want to work out how and why the process works, and for musicians and advertisers, who'd like to know its fiendish secret. (Carly Rae Jepsen, we're onto you.) It's turning out, however, that there isn't just one magic key, tune, or combination of notes that makes a song turn into a mental torture device. It's a lot trickier than that, and involves our emotions, obsessive compulsive disorder, and word association in the brain.

The experience of getting a song hopelessly stuck has a variety of names, with a music of their own: earworms, a literal translation of the German term Ohrwurm coined by a psychiatrist in 1979; "sticky music," by neurologist Oliver Sacks; or, if you're a scientist, the decidedly fancy Involuntary Musical Imagery. They're all pretty accurate: an earworm song burrows into your head, "sticks," and feels completely out of your rational control. But how does it get there, what's it doing, and how the hell do we get rid of it? Scientists have some answers — and some possible solutions.

So before you start screaming in frustration because Britney has been in your head for eight days, give this a read — it might distract you from the track burrowing its way into your earholes.

Why Do Certain Songs Get Stuck In Your Head?

First off, your earworm doesn't mean you're actually a closet Britney fan, or genuinely like the song in any way; earworms are sparked by all kinds of stimuli, from simply hearing it repeated to having an emotional reaction.

A survey done by a scientist from Goldsmith's College, London, at Earwormery.com collected earworms and where people thought they had come from, and identified a huge range of triggers — and different songs. Some were plainly associated with repetition of the song (parents with small children reported being plagued by kids' television show jingles), particularly top 40 hits. But others were more obscure.

Two factors appear to be pretty strong in getting a song stuck in your head: word association and emotional connection. A stray word can "spark" the long-term memory of a song fragment: the scientist reported that seeing the word "faith" made her suddenly "hear" the song Faith by George Michael clearly in fragmentary form. So if you suddenly get Taylor Swift in your head after getting some Starbucks, it's a clear-cut case.

The Emotional connection bit can be more tenuous. Songs we've associated with strong emotions in our lives, no matter how seemingly disconnected, can reappear in our phonological loop when we're feeling that emotion again. (This is how jingles work: they hope to harness the pleasure you feel when you're consuming the product, and associate it with a song.)

Some scientists at the University of Montreal think earworms are a kind of emotional regulation, helping us recognize what we're experiencing and preventing "brooding" by producing a repetitive loop.

What Happens To The Brain When A Song Gets Stuck?

It turns out that the "stuck-ness" of a song is clearly related to long-term memory, because earworm songs can appear with such little prompting. Even though many people report their earworms as directly related to exposure — hearing the song on the radio, for example — others report it appearing seemingly from nowhere, or in some kind of odd psychological prompt.

But the particular characteristics of earworms — that they're extremely repetitive, often appearing only in fragments of 15-20 seconds, and are very visceral experiences as if you're really "hearing" the song — indicate that they're happening in a very particular area of the brain. The working memory, otherwise known as the brain's "slave system," is basically our short-term holding facility for new stuff. It's what we use for temporary memories like shopping lists, phone numbers, or drinks orders.

Earworms, scientists think, happen in a specific part of the working memory: what's called the phonological loop. It's there for short-term auditory memories — when we need to repeat something to ourselves, like a series of names, or when we're trying to hold onto what our lecturer just said. Earworms basically hijack the loop, repeating one auditory memory (the song) forever. It's interesting because it represents the brain rebelling: the loop's supposed to work without our doing anything about it, and the earworms somehow manage to make it go haywire.

Are Certain People More Likely To Get Earworms?

People with impaired working memories — for instance, those with ADHD — might be less prone to earworms, while those with obsessive-compulsive disorder, who often suffer other "intrusive thought loops" that are completely involuntary, may be more vulnerable.

Can You Engineer A Song To Get Stuck?

If you're a songwriter looking to crack the code for an earworm, I've got some bad news: earworms appear to be as diverse as the people suffering from them. The scientist behind the Earwormery experiment reported that, of over 1000 songs in her database, only approximately six occurred more than once.

But if you do want to plague people with your creations, there are a few keys. The New Yorker published research from Goldsmiths College, London, in 2014 that indicates that a combination of long notes and very closely packed intervals (intervals are the difference between two pitches) are hallmarks of a truly "catchy" song. Composers of pop songs often try for a simple, easily repetitive chorus that can be remembered without effort — and, it seems, embedded in your head.

How The F*$k Can You Get Rid Of An Earworm?

Breaking a phonological loop can be tricky, particularly considering there are so many ways in which earworms get into your head. If they're matched to your emotional arousal, as the scientists at the University of Montreal think, then maybe you shouldn't get rid of them at all: perhaps they're functioning on some kind of deliberate neurological level and should be embraced.

But if you really, really do want to get it out of your head, scientists have a few suggestions: One is to occupy the phonological loop with remembering something else — doing a task with some kind of reliance on your working memory. This can be tricky, though: the psychologist Tom Stafford points out that it can lead to the "white bear" problem, where trying to avoid thinking about a white bear (or your earworm) just leads to you thinking about it more.

Another idea is to sing the song to the end. Earworms are generally only short fragments, so the theory goes that completing it will break your phonological loop. Musical researchers also suggest singing songs that are similar, and there's even a website, UnhearIt, based around that precise principle. The problem? It might just replace the previous song on loop.

However, the one that seems most successful? Doing anagrams and Sudoku. Seriously. Researchers have found that if you're doing some kind of tricky puzzle that involves copious use of your working memory, the chances are strong that the earworm will be abandoned, as your brain needs the space. So break out the puzzles, and you may just be able to hack your brain to release you from an earworm's grip.