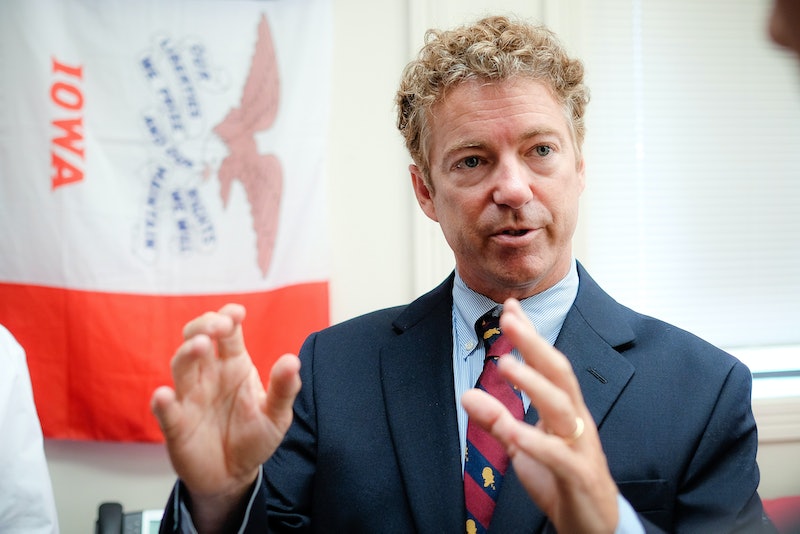 We finally know for sure that Rand Paul is running for president. Let's be honest, it isn't that surprising. He's the first Libertarian-leaning candidate who might stand a chance in the Republican race (sorry, Ron Paul). And he's bringing that perspective with him on the campaign trail, and it affects what he's saying about the major issues. We could, and hopefully will be seeing a SCOTUS decision in favor of marriage equality this summer, so what has Rand Paul said about gay marriage?

In an interview on FOX News, Paul said he supports marriage between a man and a woman:

I think marriage is between a man and a woman. Ultimately, we could have fixed this a long time ago if we just allowed contracts between adults. We didn’t have to call it marriage, which offends myself and a lot of people.

According to CNN, Rand Paul also talked about same-sex marriage at an event in Iowa: "That may not please everybody, but historically our founding fathers didn’t register their marriage in Washington," he added, "They registered it locally at the courthouse. I’d rather see it be a local issue, not a federal issue."

Here, Paul is taking the libertarian position that federal authorities shouldn't be involved in contracts between consenting adults, instead leaving it to localities to decide. But despite the fact Rand might actually be the more gay marriage-supportive candidate (loosely speaking) among the Republican contenders, that position isn't going to cut it for voters. A March 2014 Pew Research survey says that 61 percent of Republicans under 30 support marriage equality. Keeping government out of marriage just isn't going to be the slogan to win over the public.

But what he said next in Iowa hurts him even more:

And the loss of the idea of marriage is probably the leading cause of poverty in our country, in the sense that if you have kids before you're married, your chance of being in poverty is three of four times that of anyone else.

Tying a discussion on gay marriage to poverty isn't the best idea.

During an interview with The New York Times, Paul said that he wouldn't be able to tell southern Republicans that "we’re gonna be the pro-gay-marriage party" as it could hurt turnout.

So I don’t think we can completely flip. But can we become, to use the overused term, a bigger tent? I think we can and can agree to disagree on a lot of these issues. I think the party will evolve.

Right. So, he talked about the evolution of the party on the issue, but one major question remains. Will Paul evolve his position gay marriage like President Obama?