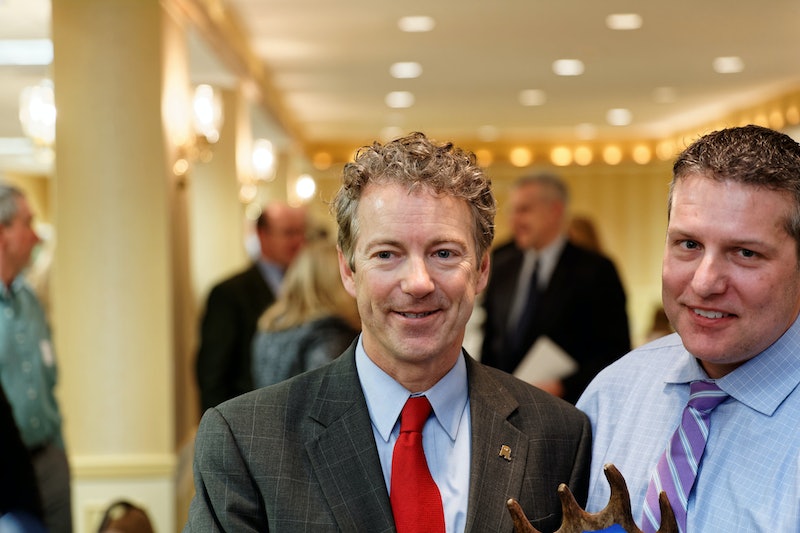 In 2012, presidential candidate Mitt Romney had a rough time adapting to social media — 22 people were required to approve tweets during his campaign, according to MSNBC. But now, we're seeing a newer breed of younger, fresher Republicans entering the scene, who have a better command of the online world. The official Rand Paul store is selling some fantastic, if a little strange, items for your inner libertarian — but his Rand Paul's best online presence comes via Twitter.

Regardless of whether Rand becomes the Republican nominee or even president, he will always be a king on Twitter. You may not vote for Rand, but you should consider giving him a follow. He's witty, and he isn't afraid to poke fun of Democrats or his fellow Republicans. Paul is also a Twitter troll, and one who roasts without mercy (sorry, Mitt Romney). And Paul's updates sometimes read like a style blog — he even offers some fashion critiques of the Republican all-stars. Seriously, it's great. If you still aren't enticed, I'll have you know that on a good day, he might even include a baby animal photo.

Really, he's a pretty hip guy and if you're in need of some tunes for this weekend's party or some jams to celebrate his official candidacy announcement, look no further than DJ Rand Paul.

Seriously, he'll help you out.

He can also get a bit sassy with his colleagues.

And with the president.

Paul can be a real troller.

He likes to name drop his famous friends.

Nor is he afraid of the Clintons.

It may not be possible to forget the time Paul aired grievances in celebration of Festivus.

And he got a response from Booker — check out the play-by-play. It's a Festivus miracle!

No one is immune.

Bring out the professed love of turtle necks.

Donald Trump isn't alone with his hair being the brunt of a joke.

I wasn't kidding about the baby animals.

More like this
For Alexia Del Valle, Her Latinx Roots Influence All Of Her Content
By Alexis Morillo
15 Halloween Costumes Inspired By TikTok Trends
By Emma Carey
Why TikTok Is Obsessed With Caesar Salads Right Now
By Alexis Morillo
Behind The Hilarity Of The "POV: You Walk Into My Room" TikTok Trend
By Lexi Inks
Get Even More From Bustle — Sign Up For The Newsletter