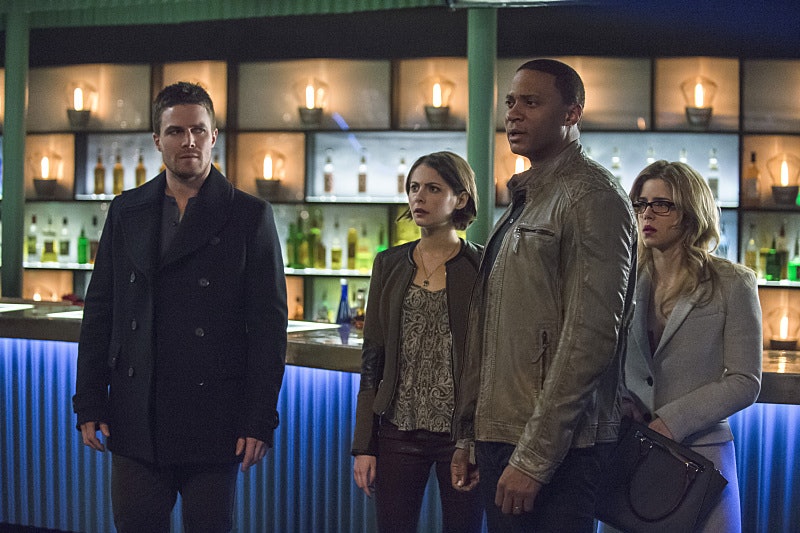 Speaking as someone who watches a lot (some may even say too much) television, I can assure you that there are very few shows out there that leave you on the edge of your seat quite like Arrow. Seriously, you just never know for sure what's going to happen next. But, of course, that doesn't stop the hardcore viewers from trying to absorb as many teasers as possible — yours truly included. Which is why I've taken the liberty of rounding up as many Arrow Season 3 spoilers that I could get my hands on to help narrow our search down a bit.

Take the newly released Arrow trailer, for example. Though most of us became mainly focused on the Olicity hook up (because, duh, we're only human), there were actually a bevy of other clues hidden throughout the promo that could help us get to the bottom of this season's inevitable endgame. And while some things (like said hook up) prove to look extremely promising, other aspects indicate that there are some very dark days ahead for our beloved Starling City residents. (Honestly, I'd stock up on tissues right now if I were you.)

So for those of you who are in need of a quick Arrow fix to fill your Wednesday night quota and don't mind getting slightly spoiled, here's a rundown of what the rest of Season 3 has in store.

Oliver & Felicity Will Have Sex

I know that you already know this, but it never hurts to have a second or third (or one hundredth) look. Let's just pray that this isn't a dream…

Someone Is Saying Goodbye

Last month, Stephen Amell took to Twitter along with co-star Colton Haynes with very vague, but highly telling remarks about experiencing a difficult and heartfelt goodbye on set. Clearly, someone will be getting killed off by season's end, though the speculation about who it will be remains pretty vast. Will it be Diggle, Oliver's right hand man? Or Roy, whose looking to face some hard jail time? And I'm not even going to mention a certain glasses-wearing blonde because the thought is simply too unbearable to comprehend. Either way, be prepared for some serious waterworks.

The latest Arrow trailer shows Oliver declaring himself as "Heir to the Demon," which indicates that something will happen to make our vigilante will have a change of heart and decide to actually accept Ra's offer to take his place. (Images of Oliver wearing a different ensemble in the upcoming Flash crossover has added further fuel to this fire.) And while the reasoning behind this decision remains a mystery, one can't help but wonder if it has anything to do with the upcoming death I mentioned earlier.

The A.T.O.M. & Arrow Will Join Forces

They both may be in love with the same girl, but according to the "Broken Arrow" episode synopsis, "When a meta-human named Jake Simmons, who kills people with blasts of energy and plasma, starts terrorizing Starling City, Oliver is forced to ask Ray for help. The unlikely duo is forced to team up to save the city." Could this be the start of a beautiful bromance?

A Jail Break Will Ensue

The latest promo also proved that life in jail is certainly no picnic, especially if inmate thinks you're the Arrow who put them there. Which is why Oliver decides to come up with a plan to bust Roy out of prison. And judging by the look of things, the sooner this can happen, the better. #FreeRoy

Lance Will Continue To Be Awful

And while this isn't necessarily a huge reveal, it is one that proves to be extremely noteworthy. Captain Lance is no longer one of the good guys in my book.