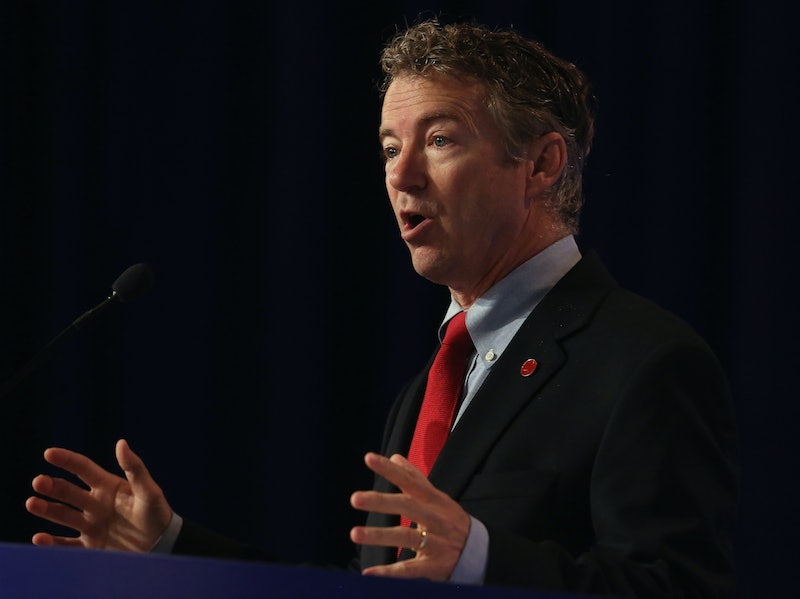 Now that Rand Paul has officially tipped his hat into the Republican race, he's laying out his policy positions to the American public. Paul's foreign and defense policy positions haven't always been clear — in fact, they've been downright confusing at times, and he's trying to fix that. Having opposed the war in Iraq, he's got a challenge ahead in appealing to hawkish conservatives — but Rand Paul's position on ISIS is one that might help him bridge the gap between mainstream Republicans and the party's Libertarian faction.

In an interview with The Federalist, Paul talked about a war on ISIS, saying "I believe that we should only intervene when the security of our nation is directly threatened. I support military action against ISIS." But there's a catch on when and how he would support such a military measure, adding: "there must be a vote by Congress and a formal declaration of war. If we are to go to war, we should make it brief, succinct and we must fight to win."

So we wouldn't be seeing America acting as the world's police under a Paul administration, but the U.S. wouldn't become a recluse either.

In January, Paul responded to the The Daily Beast's inquires about his stance on U.S. airstrikes against ISIS:

It's still a little muddy what his views are. Ok, so the Iraqis should lead operations. But should the U.S. have boots on the ground too? His recent interview with The Federalist suggests that's the case, provided several stipulations are met — war is only legitimate so long as its legislatively authorized.

Countering claims that he is an isolationist, Paul explained his defense policy in a TIME op-ed — he's not afraid of military action according to this:

If I had been in President Obama’s shoes, I would have acted more decisively and strongly against ISIS. I would have called Congress back into session—even during recess.

The most consistent thing that can be taken from Paul is that he wants Congressional involvement in any U.S. military operations overseas, and he's taking that very seriously. This shelters off accusations of him being a non-interventionist, but as for whether a President Paul really would actively combat ISIS, the answer remains cloudy.