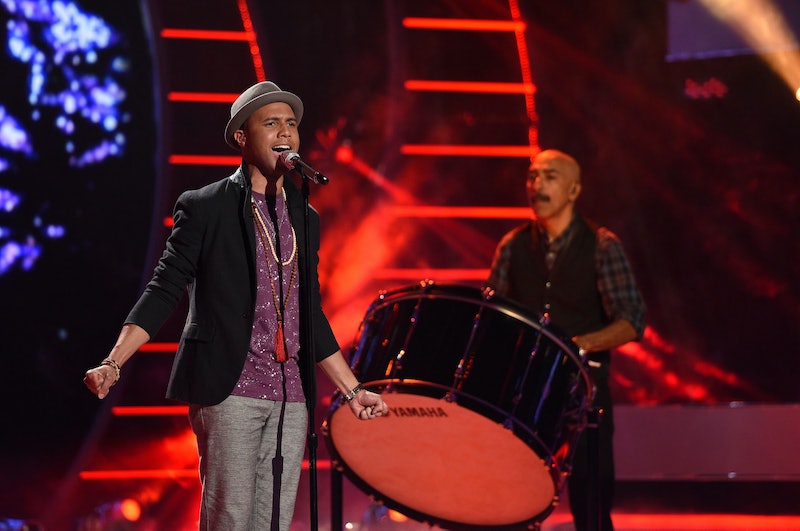 The American Idol bottom two saw a familiar face this week — but it seems the fan save is really working for him. Rayvon Owen sang for his life in the competition against star performer Qaasim Middleton, and earned the most votes from fans in a five-minute period for the second week in a row. If the fans love Owen so much to save him every week, then why does he continuously end up in the same spot? Chances are Owen just isn't memorable enough during his performances to earn votes the first time around. But the past two weeks have proved Owen will have work harder than most to keep himself in the game next week and beyonf.

There's no question that Owen is a talented vocalist — but his nerves seem to get in the way of his performances. He's up against some strong talent and his performances aren't quite on the same level as his contestants. But his vocals are much stronger than many on this season — and that's why he keeps getting saved. If Owen could just gather up enough confidence in himself to match his performance to his vocals, then he would have no problem gaining votes week after week.

Owen landed in the bottom again because he was there last week. Voters probably forgot to vote for him because they already voted for him in the save. This is a flaw in the design of the save format that will continue to hurt the winning contestant of the fan save. Though Owen's performance of "Set Fire to the Rain" by Adele was strong, he'll most likely land in the bottom two again because he's caught in a vicious cycle. It's unfortunate because Owen is better than some of the remaining contestants and has a better chance of making it in the music industry. But if the pattern continues next week there's no way he'll escape it again. And if he does, it will be the greatest underdog story of Idol history.

More like this
18 Years After 'American' Idol, Jennifer Hudson & Simon Cowell Reunited On Her Talk Show
By Radhika Menon
20 Years Later, Kelly Clarkson & 'American Idol' Judges Reunite For Her Hollywood Walk Of Fame Star
By Radhika Menon
Twitter Is Freaking Out Over Rihanna’s 2023 Super Bowl Halftime Show Announcement
By Stephanie Topacio Long
Here’s Everyone Heading To The Beach On 'Bachelor In Paradise' Season 8
By Grace Wehniainen
Get Even More From Bustle — Sign Up For The Newsletter