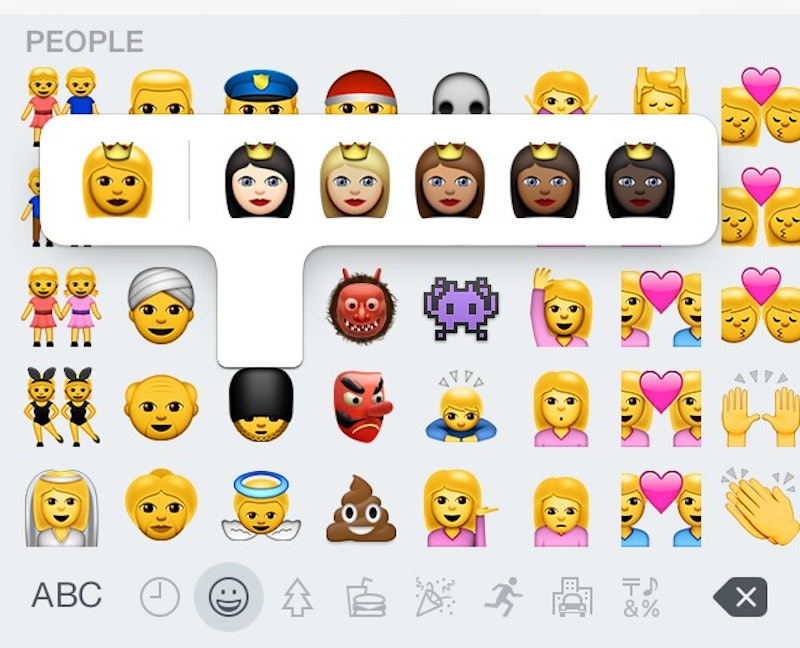 Apple released iOS 8.3 to the public on Wednesday, a much-anticipated update that comes with a ton of new features and enhancements. Most importantly, it finally brings us 300 new and racially diverse emojis. Diverse emoji are something we've been waiting for from our favorite iPhone feature for a long time now, and something we've desperately needed, considering we've had flan, leaves fluttering in the wind, and a protractor represented but not one black person all this time.

In addition to more skin tones to choose from on your human emojis, there plenty of other new additions, from new relationships to fancy gadgets of the future.

One thing to remember is that if you're sending new emoji to someone without the update, they'll get an ALIEN in it's place (seriously, it's awkward). So for the sake of a non-confusing emoji conversation, tell your friends to delete some photos and make some room for the update ASAP.

The setup is a bit different, too. Emojis also now have a scrolling keyboard instead of a keyboard with individual tabs.

Here's how you get your new emoji: Settings > General > Software Update.

Once your software update is complete, the new emojis will appear in the keyboard, replacing your old ones, because who needs those outdated ones now anyway?

So, what can you expect from the emoji update and what does it look like? Here's everything you need to know below, because let's get real, this is how we communicate now.

When you select a a body part or a person, in this case the lovely princess, you now have six options for her hair color (still no gingers) and skin tone. The emoji that don't have a racial modifier are no longer white, they're a yellowish color now.

Same-sex families! Families with more than one kid! Families with children of different genders! Women kissing women! Love is love, even in emoji world. We still need interracial couples though, you guys!

There's now representation from 32 countries. More multicultural texts for all.

What the heck? We were told there would be tacos and burritos a few months ago. This is an outrage. Guess it's more flan for everyone.