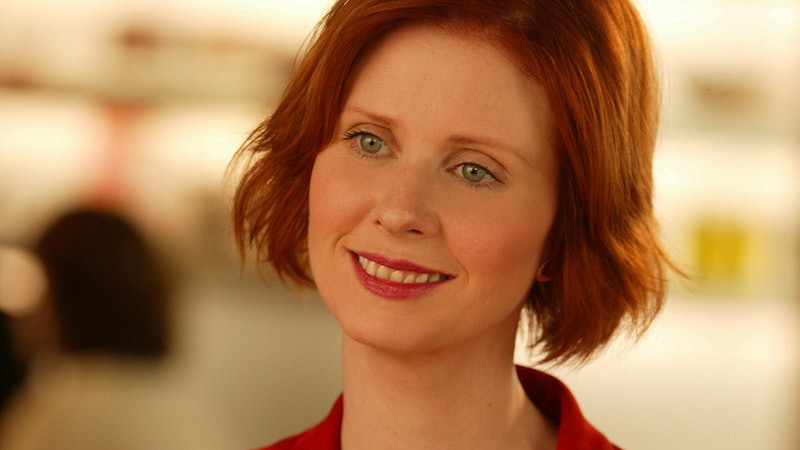 While Sex and the City has been off the air for over a decade now — man, time flies! — the HBO comedy continues to be a hit with audiences old and new, and for good reason. With Sarah Jessica Parker, Cynthia Nixon, Kim Cattrall and Kristin Davis starring as four single friends in their early 30s trying to navigate life and love in New York City, the series was a hilarious (and sometimes hilariously awkward) honest portrait of what life is like for many unmarried women, and women around the world fell in love with it. The Sex and the City girls each had their own distinct personalities, and chances are you related to one more than others.

Carrie was the melodramatic and indecisive journalist who sometimes made terrible decisions despite all her good intentions. Samantha was the sex-crazed, high-powered businesswoman who preferred a one night stand to an LTR. Charlotte was considered the prude of the bunch, and a hopeless romantic with sometimes unrealistic expectations.

And then there was Miranda.

Oh, how I loved Miranda, the smart, cynical lawyer who always had a sarcastic comeback and wouldn't allow men to pull any punches. I was a Miranda. Hell, I still am a Miranda, in a lot of ways. Here are eight reasons Miranda was basically the best, and the kind of woman we can all aspire to be.

She cares about more than just men

While yeah, finding love and/or someone to spend the night with is fine and well, Miranda had other priorities, whether it was making partner at her law firm or just chillin' in front of the TV with her Borghese spa gloves, watching TiVo. Miranda has always been comfortable with her own company, which means she's complete even without Steve (but I do love Steve).

Sure, there's nothing wrong with being a hopeless romantic, but if you spend your life expecting to be swept off your feet by a knight in shining armor, you're probably going to be waiting a while. Love is messy, it's complicated and it's hard. Sure, it can be amazing, too, but it's not what we're taught growing up, that's for sure.

She loves to eat

Screw being on a diet, Miranda knows delicious food when she sees it and she's going to eat it. Sure, it might not be wise to order Chinese takeout every single night, or to bake an entire Betty Crocker cake and eat it by yourself in your pajamas, but it's refreshing to see a character that can chow done with the best of 'em.

She enjoys sex, and she's not afraid to say it

And why should she be? She's a grown woman doing her thing — get yours, Miranda!

She works hard for her success

Being a lawyer requires long hours by default, but making partner at your law firm requires even longer hours, which Miranda is happy to put in. She knows nothing is handed to you for free and she's proud of what she's accomplished — that's something no man (or woman!) can ever take away from her.

Sure, it pays to be optimistic in most situations, but sometimes realism comes into play, too. Seeing things as they are instead of how we wish they could be is sometimes mistaken as pessimistic, but Miranda doesn't care — she accepts the label, and if you don't, too bad.

She's always there for her friends

Miranda may come across as tough, but that doesn't mean she's not hiding a soft interior. She's a loyal and unwavering friend and is there for Carrie, Charlotte and Samantha regardless of what they're going through (and whether or not she agrees with it). It's sometimes hard to hold her tongue, but she's always going to support her girls when they're in need.

She's brutally honest — even when you don't want to hear it

Sometimes you just need to give your best friends some cold hard truths, whether or not they're really to accept them. While Miranda's always supportive of the girls, she's also honest and will not hesitate to let you know what she really thinks when push comes to shove. This doesn't mean she won't still love you if you make the wrong decision, but if you keep making the same mistakes over and over again, Miranda will be the one to speak up about it.

Oh, Miranda. You're the best!

More like this
Why You Loved 'One Tree Hill' So Much — And Still Do
By Sabienna Bowman and Radhika Menon
Paapa Essiedu Likes To Keep His Relationship Pretty Private
By Maxine Harrison
John Mulaney & Olivia Munn's Relationship Timeline Features The Comedian's First Father's Day
By Jordyn Tilchen
Adele’s All-Female Lineup Includes Kacey Musgraves, Mahalia, & Self Esteem
By Shahed Ezaydi
Get Even More From Bustle — Sign Up For The Newsletter