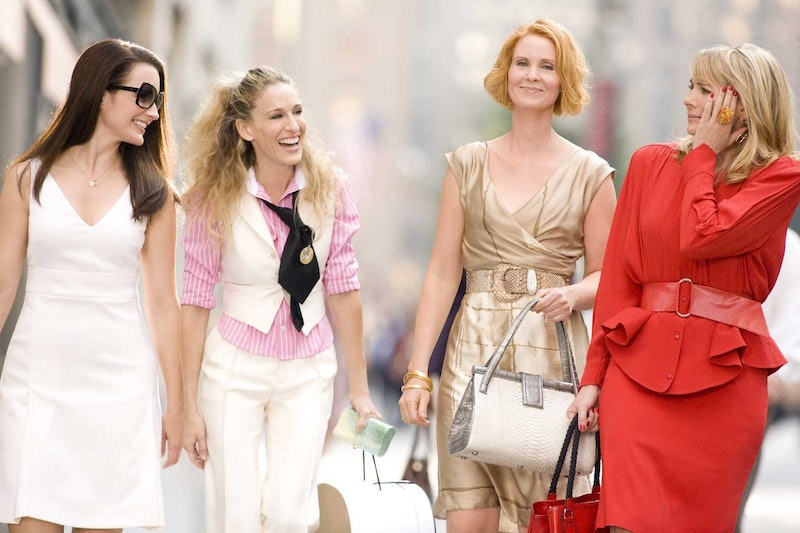 But though this divisive issue has the potential to turn into a Hatfields-vs.-McCoys, or even a Jen-vs.-Angelina-level conflict, there's one point that everyone seems able to agree on: men hate Sex and the City. The argument goes thusly: the show's four heroines are foul, selfish, cocktail-swilling harridans whose romantic values are all out-of-whack, and no real-life man would touch them with a 10-inch Manolo (for further explication, please consult one of the many essays and blog posts titled “Why Men Hate Sex and the City").

This male loathing of Sex and the City has always struck me as a little funny, given that, since all the show’s heroines were heterosexual, it was men who were facilitating all that sex (in the city, and elsewhere). But it's also funny because so much of the male hatred of the show seems to simply come from hating the show on principle, rather than actual examination of the characters.

So I had to wonder: did men simply hate Sex and the City because of the cultural baggage it held? They thought they hated the Bradshaw Bunch, because they blamed them for unleashing an army of shallow, Manolo-clad zom-Bradshaws all over the streets, bars, and cupcake bakeries of our great American cities — but what would they think of the show’s women, divorced from the burden of the culture that the show helped create? Could Carrie, Samantha, Miranda, and Charlotte get a date in real life? And how would they have fared in today's online dating market, now that OkCupid and Tinder and the like how a third of married couples meet?

Using our intrepid Senior Lifestyle Editor Julie Alvin as a model for each of our lovable lusty lasses, I set up OkCupid profiles for the whole gang, using exact quotes from the series whenever possible (sometimes I had to fudge it a little — sorry, they didn’t spend a lot of time on the show just plainly stating the six things they couldn’t live without, OK?).

And then I sat back for a week, and waited to see what happened. Were Carrie and company really as emotionally repugnant as so many men of my acquaintance had claimed through the years? Or would they clean up on online, the same way they had on the streets of Manhattan, so many years ago?

Carrie got the usual “Hi”s, of course, and a strange message about fall and pumpkin spice lattes (presumably one that was being cut and pasted and sent to many accounts under the assumption that all women love fall and pumpkin spice lattes). But Carrie got an impressive amount of thoughtful responses, especially for someone with dramatic personal philosophies and only two photos.

“You seem like a genuine and sincere gal. Very refreshing to see that on here.”

“I find your search to be inspiring. Seriously. How many people are bold enough to say that they want that kind of love? No one I've come across yet...”

“Are the restaurant waits ever worth it? The food part, not the what happened while you waited part.”“I've never heard anyone refer to love as inconvenient. I like that.”

“I don't think I've ever, in my life, worn white and not spilled something on it. But there is hope that the day will come and I'll be stain-free (a little optimism to complement your pessimistic moisturizing).”

“So, obviously you’re aesthetically interesting, but a buddy of mine was looking over my shoulder just now and claimed that – without a doubt – your profile was written by a guy; he says any profile with so little information makes him suspicious. He claimed that there were a million dead giveaways. I came to your defense, of course, but it got a little out of hand and now we’ve got a $20 bet going fast to whether or not you’re really a girl. so, just between you and me, am I about to lose $20?”

“For some reason, this reminded me of you: http://www.briskinfo.com/Images/GKImages/Cat.jpg”

Conclusions: Lots of fingers get pointed at Carrie as a character with impossible and unrealistic ideas about love and dating —so I was surprised to see that her replies were not only generally positive, but pretty run-of-the-mill. None of the men who messaged her seemed weirded out or put-off, and in fact a lot of them seemed intrigued by her far-out romantic attitudes.

Samantha’s profile was pretty much scientifically engineered to be a magnet for grody “let me show you my salami” messages. But the messages she received — more than twice the number Carrie bagged, and three times more than Charlotte or Miranda — were surprisingly respectful, considering.

“you're funny. i like you. i dig your attitude. seems like you don't give many fucks. and i liked your pondering about your ex.”

"You sound like a lot of fun, and an eloquent fun at that.”

“I really like the honesty on your profile. It is refreshing and sexy to see.”

“your last line Is fucking awesome..right where I am at the phase of life...damn it...thank you very much...”

Maybe Samantha's punny come-ons are cheesy on our post-James Deen Internet, but considering how hard it is to be an openly sexual woman on the web, I was heartened. Also, the Pumpkin Spice Latte Guy sent her the same message, though for the record, I think Samantha would be more interested in Pumpkin Spice Lube Condoms.

Though always my favorite character, sardonic Miranda is traditionally the toughest pill for male and female viewers alike to swallow. So I braced for the worst when I opened her profile. But interestingly, though Miranda seemed to get fewer responses, they were all pretty nice and positive.

Also, Pumpkin Spice Latte Guy struck a third time, which would almost definitely be a running gag on the show if it was still on.

“Wow you're significantly awesome digitally. It would be fun to learn more about you.”

“Interesting take on the witch in hansel and gretel. The kids where eating her house? I thought they just went in the house”

“So what are you doing with that law degree of yours? Are you one of those lawyers with the late-night commercials promising me millions for the emphysema that I developed while on the job at the construction site?”

The cynicism that made Miranda such a difficult character for a lot of people to watch didn't seem to have that big an impact on her online dating prospects. Frankly, it seemed like more men were freaked out by the idea of dating someone who graduated from law school than they were by the infamous Hobbes mean streak.

If there is a Sex and the City heroine who’s generally viewed as charming by the majority of male viewers, it’s Charlotte. But I realized, while hunting for appropriate quotes to flesh out her profile, that a lot of Charlotte’s personality is conveyed through tone of voice and cute facial expressions and tasteful jewelry. So, while trying to boil her down to a dating profile, I was basically left with a Connecticut girl who wanted to get married ASAP. Oops.

Also, Pumpkin Spice Latte guy sent Charlotte a message while I was writing this.

“Hi Charlotte, I've decided the same thing. I don't have much of a profile because I never open/use do online dating .But this morning...”

“I could kill two birds with one stone -- supply you with beautiful photography for your art gallery and a husband to marry!”

“Hi CYG..I love your confidence and forthright style of revealing just how you feel! A gem such as yourself...is as rare as the belief that love can be evermore and eternal.”

Worst Responses:-“after you post a head-to-toe pic, let's sit down for a drink...or two, sometime soon..”

Even something considered as universally off-putting as declaring that you're looking to get married couldn't keep the dudes away from Charlotte. And not one message from a bitter weirdo about how she needed to lower her standards!

So, contrary to what your rudest male friend has told you, the women of Sex and the City could totally land a date in real life. They don't seem any shallower, dumber, or more immature than pretty much everyone else you see on OkCupid.

And contrary to what bucketloads of think pieces have claimed, the values of these women aren’t inherently materialistic, shallow, or calculating. Stripped of the designer clothes or high society trappings, each of these approaches to love and desire are just as down-to-earth as that of any of pop culture’s single ladies. They may not be role models, but that also doesn't mean they're monsters, and it seems silly to point fingers at them for anyone's bad dating values or decision to wear a tutu in public. To me, and the men of OkCupid, they just seem like imperfect women, trying to figure shit out like everybody else. So why not lift a Cosmo to that?

Up next week: Online dating profiles for the GIRLS cast.

More like this
The Most Compatible Life Path Numbers, According To Numerologists
By Kristine Fellizar
What Is "The Ick?" The TikTok Dating Term, Explained
By Courtney Young
9 Alternatives To The 3-Day Texting Rule In Dating
By Ginny Hogan
Help! My Partner Only Wants Sex Late At Night & Won’t Compromise
By Sophia Benoit
Get Even More From Bustle — Sign Up For The Newsletter