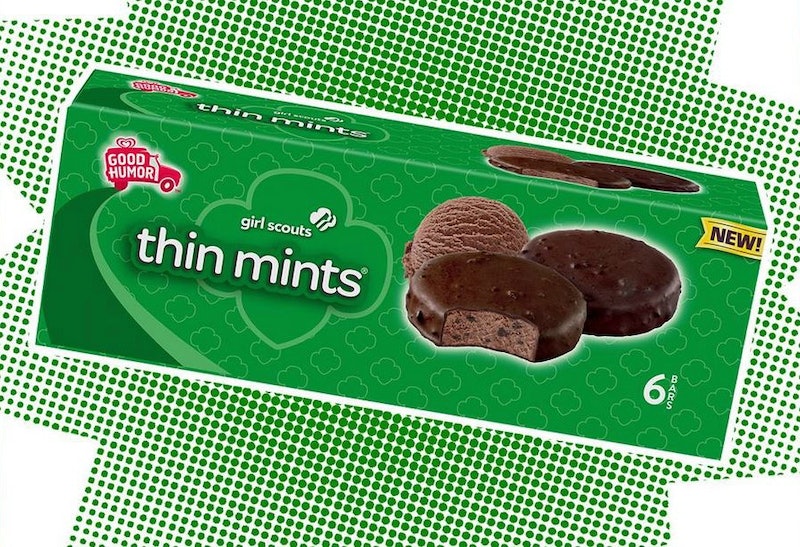 Girl Scout Cookie season may almost be over — but that doesn't mean that we'll be totally deprived of our favorite treats until next year. Your summer is about to get a whole lot more exciting, because Thin Mint ice cream bars from Good Humor now exist. Not only that, but they're officially sanctioned by the Girl Scouts of America — no knockoff Thin Mints here (and no Thin Mint shortage, either). Correct me if I'm wrong, but I believe now would be an appropriate time to deploy the word “YAAAS!”

Although word of these magical creations first hit the Internet at the end of February, this is the first I've heard of them. How did I miss them before? No idea. In any event, though, Good Humor's Thin Mint Frozen Dessert Bars are available at Target and Shop-Rite (which should make New Jerseyites quite happy, indeed), according to Consumerist — so go! Get them! Now! They are waiting for you!

What are they, exactly? They're not ice cream sandwiches; they don't consist of giant Thin Mints with ice cream sandwiched between them, so alas, we cannot describe them as such. Technically I'm not even sure they're ice cream bars, as they're referred to as “frozen dessert bars” instead (but I mean, hey froyo and Tofutti are both also frozen desserts that aren't ice cream but taste like it, so, y'know. Tomato, tomahto and all that). What they seem to resemble most are Klondike bars: Something ice cream-like lovingly enrobed in a chocolate-y coating. In this case, the ice cream (I'm just going to call it ice cream — it's less of a mouthful than “frozen dessert”) is chocolate-mint-flavored and studded with bits of Thin Mint; I'm unclear on whether the chocolate coating is also chocolate-mint or just plain chocolate, but whatever. I'll take it either way.

The big question, though, is undoubtedly this: Do they actually taste like frozen Thin Mints? From what the Internet is telling me, the answer is yes — they definitely do. In fact, according to Junk Food Guy's incredibly thorough review of them, they're pretty much perfect, from the texture all the way down to the taste:

When I grabbed hold and snapped one of these Good Humor Girl Scout Thin Mint Frozen Dessert Bars in half, it snapped/popped nicely — the insides were dense enough that the chocolate coating didn't shatter in my hand.

I took a bite, and my mind spun. IT TASTED VERY MUCH LIKE A FROZEN THIN MINT.

TODAY.com also taste tested the bars out about a month ago, and responses ranged from “Mixed feelings but still delicious” to “Loved it.” The biggest rave came from Brandon Goodwin, who said the bar was the “perfect example of how you maintain a familiar flavor in something new and innovative. It even has that delicious Thin Mint crunch and texture to the outer coating. Just like the original Thin Mints, I want to eat the entire box.” Others were a little less impressed; as Danielle Brennan put it, “I appreciated how it was super sweet and that the chocolate layer wasn't too thick; however, I wanted more crunch. I was hoping there would be a thick layer of the nice chocolate crunch in the cookies. I appreciated the bits but I wanted more.” That still sounds pretty dang good to me, though, so I'll probably be purchasing a box myself this weekend. You yourself can find out where you can get them in your area thanks to Good Humor's helpful "where to buy" search engine.

Now if only it hadn't just gotten really cold again...