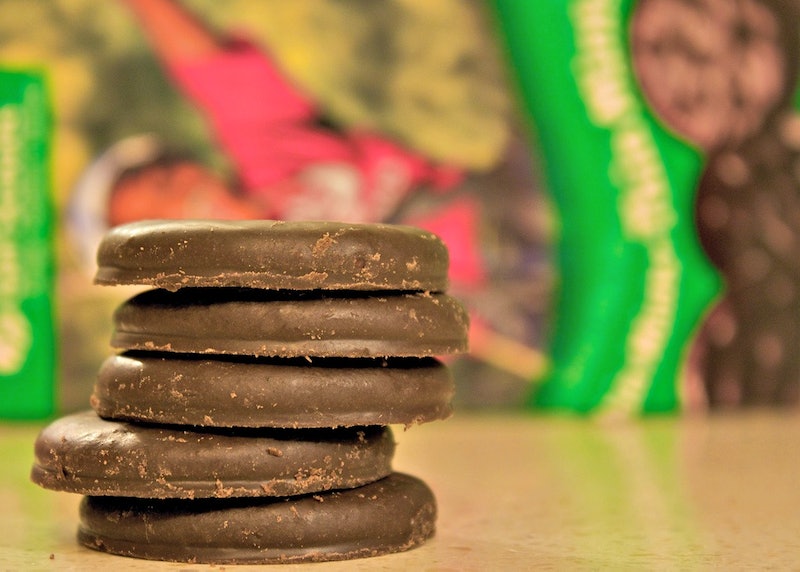 I have terrible news, everyone: Not only is there a Thin Mints shortage in some areas of the country right now, but even worse — that shortage might cause a delay in when you're finally able to munch on your beloved Girl Scout Cookies. Tragedy! However will we cope?!

According to ABC News, one of the two bakeries that supplies the Girl Scouts of the USA with their ever-popular treats, Little Brownie Bakers, are running behind in their production numbers — but only for Thin Mints. The Girl Scouts sell approximately 200 million boxes of cookies during each season, a full quarter of which are usually Thin Mints — even so, though, it appears as if the demand for the chocolatey circles of minty deliciousness might be even higher than usual this year.

Said Jennifer Thompson, senior director of marketing and communications of Girl Scouts Heart of New Jersey, told ABC News, “Little Brownie saw they weren't able to keep the initial delivery dates. The only cookie affected right now is the Thin Mint cookie. We've been told by Little Brownie that the cookies will be a little delayed, but they are assuring that they are working 24-7 to fulfill every order.” Meanwhile, Kris Charles, a spokeswoman for Little Brownie owner Kellogg, added, “While overall demand for Thin Mints has been greater than expected this season, we are working to ensure every order is delivered in a timely manner.”

But hey, the good news is this: Only about six percent of the 112 Girl Scout councils that exist in the country will be affected. Not so bad, right? Furthermore, ABC News reports that orders placed online through the Digital Cookie program won't be affected by the delay. So, y'know… at least there's that.

Besides, I have faith that we'll get through this one unscathed (and, as Cosmo points out, you can always break out your Girl Scout Cookie Oven if you get really desperate). After all, we got through these other ridiculous and non-essential edibles shortages, right? ...Right???

Back in July, we received word that one of the world's biggest supplier of kale seeds, Bejo Seeds, had totally run out of them. The bigger problem caused by the fact that our demand for the leafy green veggie is so high, though, is that it's actually starting to harm the land. You know how bad it is to overfish an ocean? Same deal with overfarming, even if it's kale.

Also in 2014, limes became scarce, with tree disease, storms, and Mexican cartels causing the little green fruit's price to rise up to $1.00 per lime. That may not seem like much—but given the fact that they were all of fifteen cents in 2013? Yikes.

OK, so technically the shortage wasn't Nutella; it was hazelnuts. But as we all know, you can't make some Nutella without cracking a few hazelnuts — so as a result of the rise in price for the “Nut” part of “Nutella,” jars of our favorite dessert spread started to sky rocket in August. Sad face.

The people of Japan were the victims this time around: Due to severe delays in imports of frozen U.S. potatoes, Japanese McDonald's locations began limiting the amount of fries each customer could order in December. Goodness knows how long they were able to make their dwindling supplies last — or what they planned on doing once they were gone. Tofu fries, anyone? How about zucchini fries? No?

First the limes, then the avocados? Noooooooo! This green, pitted fruit has suffered greatly from the massive drought that's been plaguing California in recent years; no more guacamole for us.

It's great that we're trying to watch our cholesterol and everything… but you know what happens when we insist on eating only egg whites? We throw away the yolk. That's right: We've literally been dumping half of a perfectly edible food into the garbage, which subsequently caused an egg white shortage in the spring of 2014. Here's a tip: Save those and find something else to do with them. How about making this homemade pumpkin pasta recipe?

I saved the best for last, because this one is full of so much ridiculousness I don't even know what to do with it all: All the chi-chi folk who spend the warmer months relaxing in the Hamptons were thrown into a panic this summer when the drank all the rosé they had available. Horrors upon horrors! Whatever shall we do??? Surely we can't be expected to drink… gasp!… Reisling???