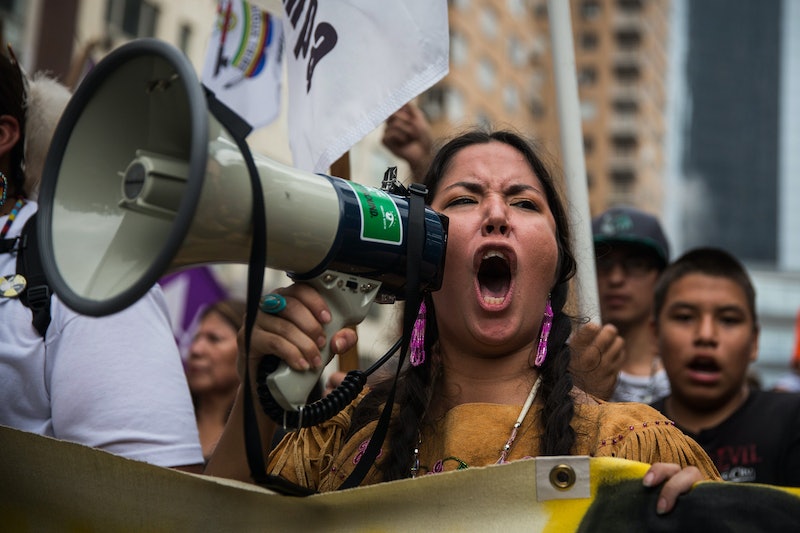 Unless you've been the victim of a Kimmy Schmidt-esque experience and haven't seen the news for a decade, you're probably aware that climate change is here — and it's terrifying. Between reports of disintegrating ice shelves, dwindling water supplies in California, or the fact that climate change could even deprive you of your morning coffee, there's not a whole lot to feel optimistic about these days regarding the state of our planet. Sorry to be a downer.

Fortunately, the impending ecological crisis has pissed off a lot of people who won't sit idly by as fossil fuel companies transform our the earth into a working set for the new Mad Max sequel. Those within the burgeoning environmental justice movement — which aims to improve the environment in all communities, and focus on addressing problems within those communities that have negative impacts on the environment — know we're playing a higher-stakes game now. They want you to know that calls to save the polar bears without any action behind them just ain't gonna cut it anymore. Instead of trying to fix the innumerable problems climate change creates individually, activists are instead turning to fight the root cause of global warming.

No recent book better represents this dramatic shift in strategy than Naomi Klein's latest masterpiece, This Changes Everything: Capitalism vs. the Climate. In the book, Klein paints a revolutionary yet hopeful image of how we will need to change our culture, and economic system, to avoid catastrophe.

This Changes Everything by Naomi Klein

While there's a ton to be said about the book, one of the things that stuck out most was how thoroughly feminist eco-justice is at its core. This, of course, brought me to the concept of ecofeminism, a field of study developed in 1974 which uses feminist principles to address the way human beings interact with nature. Françoise d'Eaubonne's book, Le Féminisme ou la Mort, outlines the similarities between the subjugation women face at the hands of the patriarchy, comparing and contrasting how humanity's treatment of the environment — namely through environmental devastation — has a lot in common with the way women are treated in society. I've compiled a list of feminist and ecofeminist themes at the heart of Klein's book, as well as the larger movement, that show why feminism and activism for the environment go hand-in-hand. There's a lot to stand up for this Earth Day.

Reproductive Rights Are Worth Fighting For

It's no secret that patriarchal lawmakers in this country think women can't be trusted to control their own bodies. Klein highlights the hypocrisy that so many of these same "pro-life" lawmakers push for aggressive drilling, fracking, and mining — practices that significantly limit our planet's ability to produce new life. Klein notes that, at present, "if the Earth is indeed our mother, then far from the bountiful goddess of mythology, she is a mother facing a great many fertility challenges,” and needs us to fight on her behalf. Klein's not the first writer to see the similarities between women and the environment for their life-giving and life-sustaining abilities; ecofeminists have been arguing for ages that there's a similarity between pro-life advocates and pro-drilling enthusiasts — both of whom seek control over things which extend beyond themselves.

Considering we are living in an age of mass extinction, those who seek to push a pro-life agenda should stop worrying about if women should be allowed the basic dignity of choosing whether or not to bring a child into an already over-populated world. Instead, let's take that "righteous" anger and direct it towards curbing practices that deny our mother Earth her own natural right to reproduce and regenerate. Ecofeminism draws similarities between the female tenets of reciprocity and nature's own sustainability, sensing that the control of reproductive resources have been in the hands of unscrupulous actors for too long in both cases. We need to stop telling women what they can and can't do with their bodies and, while we're at it, protect the reproductive rights of our planet, too.

It's Never OK to Justify Exploitation

The long-standing expectation for women to serve as unpaid domestic labor is just one example of how women are often asked to sacrifice their own lives and freedom for the "greater good" of society. Feminists reject the notion that oppression in any form ever benefits society — and ecofeminism takes this a step further to include the exploitation of the environment for the benefit of corporations at the expense of our climate.

Klein argues our current economic and environmental policy is "directly connected to the notion of sacrifice zones — places that, to their extractors, somehow don’t count and therefore can be poisoned, drained, or otherwise destroyed, for the supposed greater good of economic progress." The exploitation of land is also inherently tied to the exploitation of people. After all, "in order to have sacrifice zones, you need to have people and cultures who count so little that they are considered deserving of sacrifice.” Sound familiar? Women's bodies, like resource-rich portions of the world, have long been considered sacrifice zones, justifying and rationalizing the exploitation of others in ways which do not benefit those who are marginalized.

We Must Prioritize the Rights and Safety of Marginalized People

Although climate change affects us all, it doesn't affect us all equally. Klein observes that, in a cruel twist of fate, “historically marginalized people in the Global South, as well as communities of color in the Global North ... are more vulnerable to the impacts of climate change," even though the consumption of wealthy countries and communities is responsible for the majority of atmospheric carbon. Klein re-centers the conversation by looking at the particular hardships faced by these communities, many of which also serving as centers of gender-based oppression. Throughout the global south, women are culturally and economically marginalized — forced, in many cases, to endure horrific wages and working conditions while manufacturing consumer goods for the global north.

It's Not Us vs. Them

For ages, the environmental movement has taken on the fight against climate change as an effort to "save the Earth." This patriarchal notion created a false dichotomy — treating humanity as not only the only force capable of enacting change, but served to "other" the concept of nature. Thing is, we're all a part of the same nutty starship, kids. Nature is humanity, and humanity is nature. This concept is due in large part to feminist studies: men have long dominated society, acting as the sole arbiters of what is best for humanity writ-large. Men are not the deciders in society, and nor are we an independent body that must save the planet, as though it were an entity that didn't include our own salvation, too. Klein writes:

[When we] resolve to save the planet, we cast ourselves in a very specific role. That role is of a parent, the parent of the earth. But the opposite is the case. It is we humans who are fragile and vulnerable and the earth that is hearty and powerful, and holds us in its hands.

The notion that human beings must save the planet, rather than their own humanity, through conservation is a tired trope that's past its sell-by date. Ecofeminism would argue that this is an outgrowth of the patriarchy; another stale idea that is on its way out the door these days.

Exploitation of people, land, or resources all stem from the same concept. When we "other" something, we view it as less important than ourselves. This idea holds true in feminist theory as well as eco-justice. While a productive economy is important, it cannot come at the expense of others. Feminism affirms the inherent value of all people, arguing that human beings are not commodities for exploitation. Ecofeminism takes this idea to its logical conclusion, arguing that natural resources are not commodities that can be exploited without considering human implications behind drilling, fracking, and polluting. Klein argues that environmentalists care about natural resources in the same way that environmental advocates believe that a society's health can only be measured by its most unfortunate, saying, "the logic that would cut pensions, food stamps, and health care before increasing taxes on the rich is the same logic that would blast the bedrock of the earth to get the last vapors of gas and the last drops of oil."

Social Change is Rooted in Love, Not Hate

The foundation of feminism is not hatred of men, but rather love and concern for the well-being of women. Living out this radical love forces feminists to confront the men in our culture who continue treating women as property. When some men are asked to relinquish their unequal power, they respond with aggression. Love for women, as espoused by feminism, means love for humanity. So too does environmentalism call for love, respect, and cooperation. Few environmentalists call for a radical societal change. No one's arguing we should pick up stakes and move back into caves, despite what some detractors might lead you to believe. Similarly, ecofeminism calls for love and respect of the planet as a giver of life. Basically, the movement says to love nature like you would love anyone who gave you life, air, and a sunny day. To have love for any one thing is to love everything in equal measure. And without respect, one can't love. Klein interviews a protester who says, "The connection to this place and the love that people have for it, that’s what Arch Coal doesn’t get, that’s what in the end will save that place. Is not (sic) the hatred of the coal companies, or anger, but love." Until we can demonstrate to petrochemical companies that nature is not an untapped resource — but a renewable resource for affirming one's own humanity, the fight still lies ahead.

It seems obvious that women should, and do, direct the goals and activities of the feminist movement. It's only natural that in the struggle for women's equality, the leaders should be those most affected by and knowledgeable about patriarchal injustice. What's interesting, though, is that women also play the primary role in driving the eco-justice movement. Grave danger to our planet is something that should, theoretically, move both men and women to action. Despite climate change's universal threat, however, Klein observed that "the prominent role played by women, who often dominate the front lines, providing not only powerful moral leadership but also some of the movements’ most enduring iconography." Images of powerful women fighting for the planet are enduring testaments to the strength and determination of women everywhere. No surprise, then, that ecofeminism seeks to kill two patriarchal birds with one stone — overthrowing sexism and environmental destruction with one fell theoretical swoop.

This Changes Everything by Naomi Klein, $14, Amazon