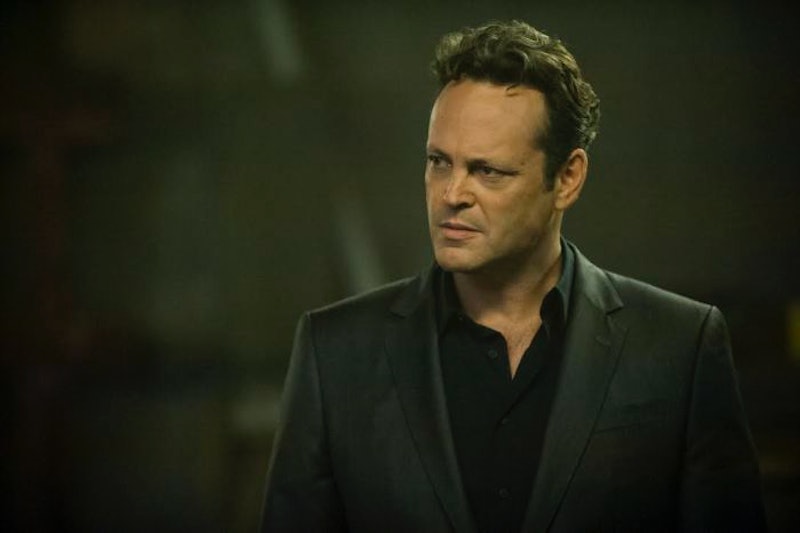 The premiere of the first trailer for True Detective season 2 on Thursday did exactly what a minute-long teaser is supposed to do: raise a lot of questions. Watching the short clip, viewers wondered: what's caused Vince Vaughn and Colin Farrell's characters to seemingly hate each other? Who is Rachel McAdams' badass cop? What evil person dared to cut off Taylor Kitsch's perfect long hair and give Farrell that mustache? And, most pressingly of all: what's the name of that gorgeous song?

(Update #1: According to the Arden Concert Gild, the song is an unreleased track by country singer Lera Lynn.)

Throughout the teaser, a beautiful, haunting song plays, with fittingly depressing lyrics like "we were like a battlefield locked inside a holy war," "we were we like a pair of thieves, tumbled locks and broken codes, you cannot take that from me," and, darkest of all, "your love is my due diligence, the only thing worth fighting for." Unfortunately, neither HBO, Shazam, nor Google itself can identify who sings the tune, so it's a safe bet that it's an original commissioned by HBO solely for True Detective's new season. In time, the network will surely announce who's responsible for the stunning song, as fan reaction is already huge. On Twitter, it appears that the song is quickly becoming more popular than the trailer itself, with users begging for the name of the artist and wondering where they can download the song for themselves.

Hopefully, the answer will be provided shortly, and whatever artist is responsible for the tune will likely see a surge in popularity. HBO has gone down the original song route before, giving screentime to up-and-coming artists like Lucy Rose, whose song "Shiver" was used in the season four finale of Girls earlier this year, so it's not out of the question that whatever tune they chose for the Detective trailer hasn't been heard by mass audiences.

In the meantime, watch the clip a few more times and let the perfection of the song choice sink in. If lyrics like "change will come to those who have no fear" are meant to symbolize the episodes ahead, then you can bet this season of True Detective will be one you absolutely can't miss.