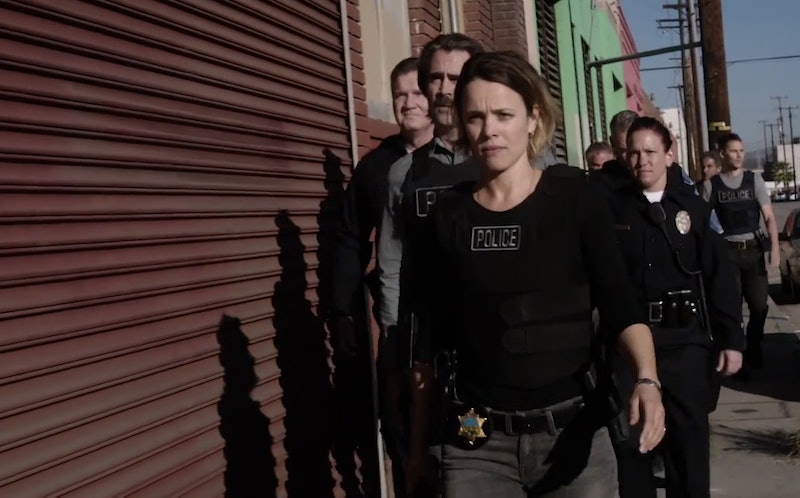 After months of waiting, the True Detective Season 2 trailer is finally here. The teaser doesn't reveal much about the plot, but we see a stare-down between Vince Vaughn and Colin Farrell, Rachel McAdams wielding a gun, and Taylor Kitsch brooding, so what else do we really need? This time around, Farrell is the mustachioed man instead of Matthew McConaughey, and he looks like he's close to tears in one extreme close-up shot, so he may be just as unhinged as Rusty. The actual tears maybe start flowing for Kitsch, who almost guns someone down before briskly walking away and trying to breathe through his emotions.

The most exciting part about True Detective's second season is Rachel McAdams as a badass cop. She's leading the pack and seems to be the most put-together out of her entire team. While Vaughn and Farrell are throwing punches, she's looking calm, cool, and collected. That may changed when a masked man (or woman) comes into the picture, though. At the end of the trailer, we see a figure in a black ski mask with a finger to his or her lips, and it's a lot different than when they do it on Pretty Little Liars. The entire trailer has no dialogue, but it has a perfectly haunting soundtrack that sounds like a new original song for the series. (Update: According to the Arden Concert Gild, the song is an unreleased track by country singer Lera Lynn.)

We'll have to wait and see if that is the new theme song and what happens with this new crew when True Detective Season 2 premieres June 21 on HBO.

More like this
'The Capture' Is Finally Back – & S2 Looks Tense AF
By Sophie McEvoy and El Hunt
Donald Glover’s Earn Returns Home in The 'Atlanta' Season 4 Trailer
By Kadin Burnett
What Is Ben Affleck's Net Worth? At 50, The Oscar Winner Makes 8 Figures Per Film
By Meg Walters
Someone Must Pay For What Happens To Bad Bunny In 'Bullet Train'
By Arya Roshanian
Get Even More From Bustle — Sign Up For The Newsletter