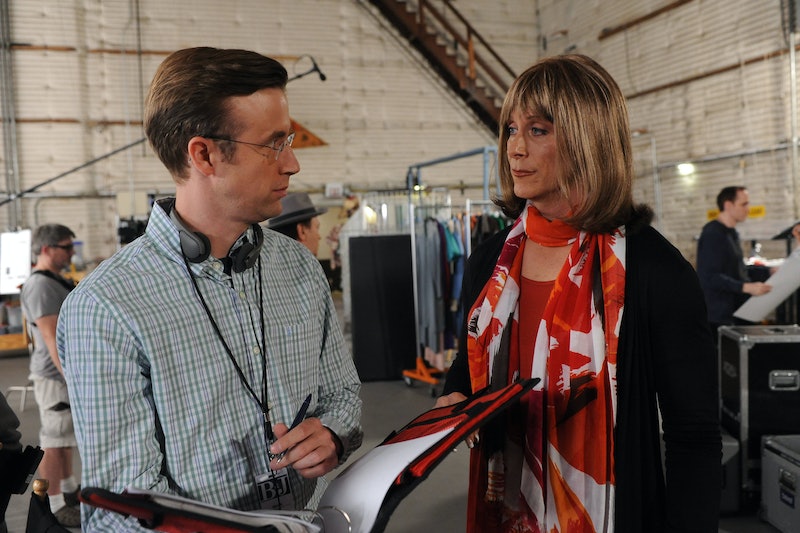 FX is combining old school with new school comedy in the form of The Comedians starring Billy Crystal and Josh Gad. The show follows real life comedians, Crystal and Gad, in a pseudo-documentary style series as the two join forces on a sketch comedy show called The Billy and Josh Show to revitalize both of their careers (Gad known for The Book of Mormon, and Crystal known from a lot, but let's just say When Harry Met Sally). The two men — both with differing styles of comedy — seem to have opposing viewpoints of what direction their new show will go. One of those opposing viewpoints is who should direct the series — fictional director Jamie Dobb (Steven Weber) — who, unbeknownst to Billy, has started presenting as a woman. But I have to ask how The Comedians will handle a transgender character, considering what we see in the pilot.

After deciding that Jamie Dobb — an old colleague of Billy's from "back in the day" — would direct the show (Josh wanted a woman to direct), it is revealed on-set that Jamie now identifies as a woman, to Billy's total shock. It was the final "joke" of the pilot episode, clearly setting the situation up for "comedic" conflict. It feels like we, as an audience, are being nudged to assume that Billy — who is portrayed as an "old school" character — will experience culture clash with the addition of Jamie. Unfortunately, I don't know if that is an entirely great way to go for the show.

Of course, The Comedians could still surprise me; there are two ways the series may handle this storyline. There's the direction that will allow Jamie to inspire Billy to become a more well-rounded, inclusive character — he isn't completely a lost cause, but he could use a little tenderness — through working closely on The Billy and Josh Show. The other direction, the more worrisome storyline, is that Jamie's character will be used as a tool for comedic misunderstandings and knee-jerk reaction.

Based on what we've seen from the writing so far, it seems like the jokes will err on the latter side, but perhaps it is too early to tell. Maybe this show plans on getting a lot deeper than I expect. And with that in mind, please, Comedians, prove me wrong. While I appreciate all forms of comedy, the idea of using a trans character as a comedic tool is outdated and inappropriate.

Here's hoping that The Comedians takes the high road in the coming episodes.