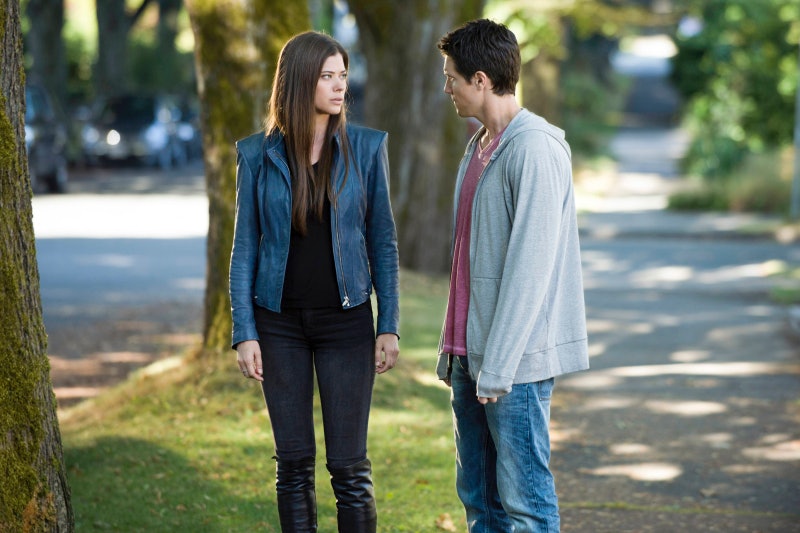 The Tomorrow People's format is becoming clear. Using my evolved TV prediction powers, I foresee almost-weekly encounters with new Tomorrow People (a TP of the Week), peppered with clues and episodes that advance a larger season arc. This week's episode, "Girl, Interrupted," turned the TP of the Week lens on Cara, via flashback.

Here's what we learned about Cara's past, via flashbacks:

We also learn something about Cara from the present day: She would rather die than lose her TP powers. When she's captured by Ultra, Stephen negotiates to have her stripped of her powers rather than killed. He has to do the deed himself and conveniently, his time-stopping power comes into his control just in time for him to plot out swapping the TP-stipping serum with saline and explaining the scheme to Cara. Personally, I prefer Piper Halliwell's time freezing power, but I guess this will do.

This week's episode also had a strong B-Plot. Stephen accidentally reads the thoughts of a depressed classmate, Emily, who is planning to kill herself in 48 hours. Stephen feels a connection with her because she was the other kid constantly seeing the school nurses and counselors. Her issues are much darker than having secret magic powers though. She feels responsible for the death of her younger sister. Even though everyone on both sides tells Stephen he can't intervene, he eventually does - with the help of Cara and John, no less. Cara teleports into the car like a guardian angel and easily talks Emily out of letting the oncoming train hit her (she's parked on the tracks and it's getting closer by the second).

While Stephen feels great about saving the day with Emily, the situation does turn out to be trouble. Astrid was on her way to try to talk Emily down as well - and she witnesses Stephen teleporting away from the scene. When she confronts him about it, he lies (he's the worst liar ever, a bad quality for a double agent) and she vows to get to the bottom of it herself. This is pretty much exactly what everyone warned Stephen would happen when he tried to get involved with the Emily situation, but I'm personally pretty excited for antagonist Astrid.

Did you watch this week's The Tomorrow People? What did you think?