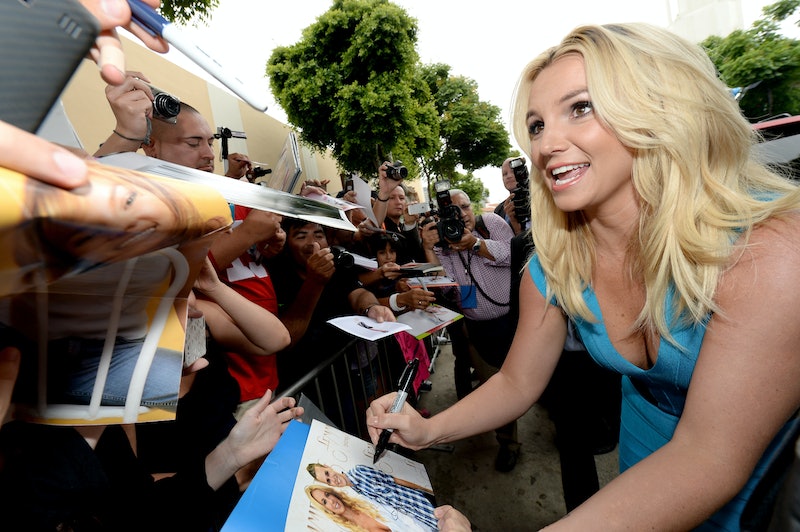 Whether or not this year has been good to us all is surely up for debate, but this is without a doubt one of the best things to result from 2015: Britney Spears and Iggy Azalea are teaming up on a new tune titled "Pretty Girls" and fans of both stars are already freaking out about it. The official song is out on May 5, and Azalea and Spears are already shooting a new video for their musical collaboration in anticipation of its release. The ladies took LA's Ventura Blvd. by storm on Thursday to shoot an epic car scene for the "Pretty Girls" music video — and if the stills are any indication, you're going to want to cruise around in Spears and Azalea's amazing automobile too.

The snippets that we've seen of the new "Pretty Girls" video shoot indicate the clip will feature a super California vibe — which is appropriate, considering the pair filmed this portion of the video in Los Angeles. In this video, Azalea and Spears are in the backseat of a bright orange Jeep, cruising around while looking flawless in flashy prints.

Honestly, I'm surprised this pairing didn't happen sooner — these two look like they could be sisters hanging out on the Hollywood strip. I can't wait until the single drops and we can actually hear the full tune, but until then, here's what the stills from the new music video tell us:

This part of the video was shot in Studio City (land of Universal Studios) on Ventura Blvd., which is part of the infamous San Fernando Valley. The crimped hair and cheetah print is totally reminiscent of the '80s cult classic Valley Girl.

The Girls Are Hyped

Probably because they're looking ridiculously flawless.

The Jeep Isn't The Only Car They're Cruising In

The girls also get a ride in this sweet convertible.

Their Accessories Game Is So On Point

Where can I buy those triangle earrings?!

Spears Is The Designated Driver

Well, technically no one is really "driving," but still... Spears gets control of the wheel.

There's An Insane Amount Of Denim Going On

BritBrit practically introduced me to destroyed denim in the early '00s, so this feels appropriate.

They're Having The Best Time Ever