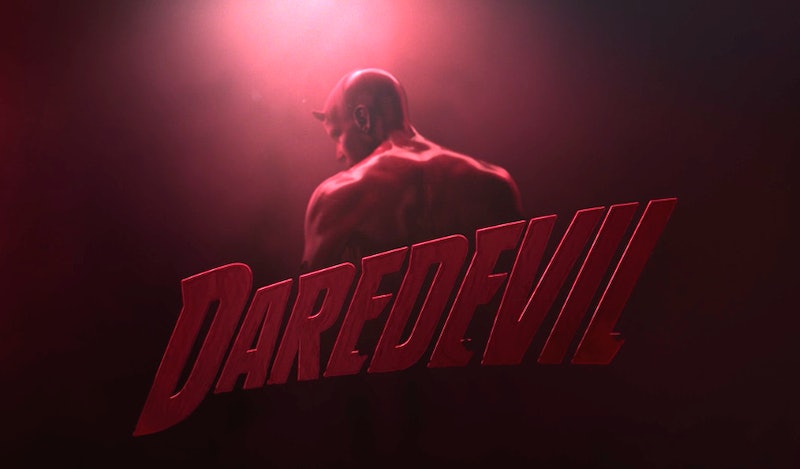 Shoutout to everyone in the middle of a day-long Daredevil marathon. Whether you're at hour one of the new Marvel and Netflix venture, or hour eleven, there's one thought that's probably crossed your mind — is that blood in the Daredevil credits? It sure looks it, doesn't it? Even though you might not be far into your viewing, you've probably read at least one review of the show that mentions that this series is bloody. Not necessarily a bad or horrible thing — but Daredevil's got a lot of blood. At least compared to what we're used to from Marvel's television shows.

The crime fighting Matt Murdock, aka Daredevil, has a go-to color scheme of red and red, and the opening credits of the show reflect that. It's red on red (on red on red), and a red liquid moves and transforms to create images — if you've seen the opening title sequence, you know exactly what I'm talking about (If you haven't, bigger question is, why haven't you started watching Daredevil yet?). It's hard not to simply assume that the liquid red is blood. It drips in the same way that blood would drip, but it's a little bit thicker than normal. Some might make a case that it's just a lot of spilled red paint, or red-colored chocolate (yes, all I could think about while watching it was chocolate, OK?). Even though we might try to think it's not blood, it probably is. I mean, it'd be a pretty bold choice for the new Netflix series, but why in the world would Daredevil's opening credits would focus on dripping red paint (or dripping melted chocolate)?

Within the first few minutes of the pilot episode, "Into the Ring," there's a beating. At the end of the episode there's another beating, too, and you've got to understand that this isn't like the family friendly fight that you'd find on ABC. This is lots of punching, lots of grunting, dripping blood in the rain. You've probably seen this image all across the released Daredevil promos. There's no denying that this is blood.

I got the chance to talk to Daredevil's Elden Henson — who plays Matt Murdock's best friend and law partner, Foggy Nelson — and he didn't think the show was that bloody. "I don't know if that's how I would describe it," he explains to me over the phone, "There are elements of that, being that it's a crime fighting show." So I guess a little bloodshed just comes with the territory.

Don't let the added factor of lots-o-blood sway you from watching Daredevil. We're not talking Quentin Tarantino level bloodshed every other second, but just know going into it that the show takes on a much grittier element than we've seen before. Honestly, it's welcomed, considering the comics themselves can be dark, gritty, and violent, and that often gets lots during the transition to film or television (and yes, I am talking about how Marvel's Agents of S.H.I.E.L.D. sometimes comes across a little light and fluffy for my tastes). This departure from that is a much welcomed change, especially for Marvel.

Netflix just can't blame me if I close my eyes a few times when the red on red action gets a little too intense.

More like this
Here's How To Stream 'Downton Abbey: A New Era' & The New 'Downton' Channel
By Alice Broster and Sam Ramsden
Does Umbrella Academy Season 3 Have A Post-Credits Scene? The Answer Will Surprise Fans
By Brad Witter
Wait, What’s Going On With Ben In That Umbrella Academy Season 3 Post-Credits Scene?
By Gretchen Smail
Everything You Need To Know About The 'Knives Out' Sequel
By Grace Wehniainen
Get Even More From Bustle — Sign Up For The Newsletter