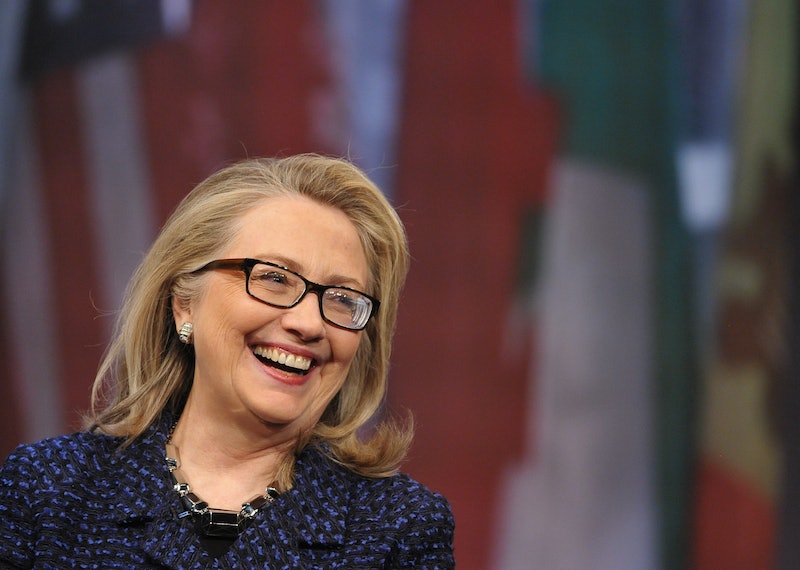 I was excited to hear that Hillary Clinton is running for president in 2016, but not just because I like her politics. I was excited because her candidacy gives me a chance to right a wrong that happened last time she ran. Because in 2008, I lied to almost every man I knew about voting for Hillary Clinton in the Democratic primaries. I didn't mean to, really, but everywhere I went, it just seemed to keep happening — I lied to casual acquaintances, I lied to coworkers, and I lied to my male then-boss, who eagerly greeted me on the morning of the primaries with a cheerful, "You voted for Obama, right?"

When I pulled the lever next to Clinton's name at the primaries, I wasn't expecting to lie about it, of course. I knew she was a controversial pick in my ultra-liberal social circle, and I expected to have some civil and frank conversations with my close friends who were disappointed that I hadn't voted for Barack Obama, whose views were much closer to my own than Clinton's. I expected to explain that I felt an intense personal connection to Clinton as a national figure; despite the fact that some of her policy stances and campaign tactics (like that "3 a.m. phone call" ad) had left a bad taste in my mouth.

And I did have that conversation, with my close friends. But I hadn't been prepared for the conversations I'd have with non-close friends; that random people in my life would feel entitled not only to know how I had voted, but why I had voted that way. And I certainly hadn't been prepared for the sheer volume of ostensibly liberal, progressive men who would wrinkle their nose at me when I described my reasons for voting for Clinton, and tell me that I was "voting for Hillary just because she's a woman."

So, I stopped telling people about my choice. I stopped engaging with dudes who seemed to think we were sparring on Real Time with Bill Maher rather than just standing next to each other at a bar. But as I kept my vote to myself, I began to wonder: had I made the wrong call? Was I a freak and an idiot for voting for with my emotions, instead of the clear-eyed political rationality that so many of the men around me claimed to possess?

I will be the first to admit that my interest in and affection for Clinton isn't based on a clear-eyed, unemotional review of her political track record. Her foreign policy decisions are, to put it lightly, often not my cup of tea. Her stances on many of the U.S.'s international conflicts have left me feeling even more conflicted about my ongoing interest in her political career. And, yeah, I think she shouldn't have sent those emails from her personal account.

And yet, in the face of all of this, I voted for Hillary once, and I'll vote for her again — in the primaries, and in the presidential election if I get the chance. Because Hillary, like all high-profile politicians, means more in the hearts and minds of the public than the sum of her collected policy decisions. And my relationship with her began long before I had cast a single political vote.

Bill Clinton was elected president in 1992, when I was in the fifth grade, and I was immediately in awe of Hillary Clinton. I know that by 2015 standards, the idea of the First Lady being the most liberated and powerful woman in the public eye is absurd, but it felt true to me. Before Clinton, the most iconic First Lady was Jackie Kennedy-Onassis, a photographer who had attended Vassar and George Washington University, but who played down her intellect and played up her gamine, Audrey Hepburn-ish look to help her husband's career.

Hillary Clinton didn't play down anything. She was a lawyer, a thinker, and, according to many political columnists at the time, the real brains behind the entire Clinton operation. She had political plans. She pushed for health care reform. She kept her maiden name. I looked at her and saw a different way to be a woman.

In high school, I began to use a last name that hyphenated my mother's last name to my father's, in honor of her "Rodham." My heart broke as I watched her grimly stand by Bill's side through the Monica Lewinsky scandal. She had had so many ideas, such a blazing intellect, such fight in her. She didn't deserve to have things end like this.

I was also just becoming aware of sexism in 1992, both on a grand and small scale — the fact that people had dismissed Anita Hill as "a little bit nutty and a little bit slutty" in coverage of her landmark sexual harassment case against Clarence Thomas; the fact that I was expected to suck it up when boys at school snapped my training bra or made fun of my body; the fact that, despite all the strides forward women had made in the decades before, most people I met still seemed to believe that whatever career I chose would be a "hobby" to bust out when I wasn't busy raising my kids or maintaining my husband's home.

As I grappled with sexism in my own tween life, I saw Hillary battle it on a national scale — while the media roared with criticism about most everything she did, one moment claiming that her health care ideas overstepped her boundaries as a First Lady, the next critiquing her hair and choice in headbands.

To me, Clinton was a symbolic figure, a woman who wanted more than society was willing to allow her, or any woman, to have. As I grew older, I developed sharper political opinions, and realized that I didn't agree with a lot of decisions that Bill had made in office, like the U.S. involvement in Kosovo. But Hillary Clinton still loomed larger than life to me.

In high school, I began to use a last name that hyphenated my mother's last name to my father's, in honor of her "Rodham." My heart broke as I watched her grimly stand by Bill's side through the Monica Lewinsky scandal. She had had so many ideas, such a blazing intellect, such fight in her. She didn't deserve to have things end like this.

The men who talked down to me for voting for Clinton thought their primary vote for Obama was made using pure reason — but couldn't their vote also have been about wanting to identify with "the cool" candidate, or even just about keeping Clinton out of the running?

So when it became clear that Clinton would have a political career of her own — that things wouldn't end that way — I was heartened. I was excited to have the chance to throw my support behind her for real. And so what if I was voting for her because I connected with her emotionally?

Why are we so invested in pretending that emotions don't exist in politics, that all of our political decisions come from a place of peak empirical rationality? Most of the men who critiqued my voting in 2008 positioned themselves as dispassionate decision-makers who had analyzed all the facts, without taking a single silly feeling into their accounts, and came up with the only correct way to vote. They framed women who weren't sure of Clinton's policies but voted for her anyway as emotional children, big babies focused only on getting a woman in the White House. Why couldn't these women be mature enough to listen to them, the logical males?

This is, obviously, not true. In fact, a 2006 study that used MRI imaging on strongly political partisan men found that listening to positive and negative statements about their candidate of choice didn't light up the centers of our brain that are dedicated to reasoning — they instead activated the parts of the brain related to emotions. And in fact, the same study found that justifying the behavior of their candidates actually yielded activity in the reward-processing center of the brain. The men who talked down to me for voting for Clinton thought their primary vote for Obama was made using pure reason — but couldn't their vote also have been about wanting to identify with "the cool" candidate, or even just about keeping Clinton out of the running?

Almost none of us vote based solely on our analysis of the candidate's policies. If we did, charisma and personality would play no role in the political process (and then how would George "We'd Like To Have A Beer With Him" W. Bush have gotten elected twice?). Instead, we usually pair our understanding and analysis of political positions with our values.

This isn't to say that I value Hillary Clinton solely because she is a woman. I am not voting for her just because she's female — remember how some people feared that John McCain would win, simply because he had a female running mate, and women, those poor emotional creatures, would vote any woman into office? Clinton is a legitimate candidate, and a lot of the tentative platforms proposed for her candidacy — from raising wages to reforming the way we tax financial assets — seem like they could offer practical solutions to some of the financial inequality issues that are currently wracking this country.

I don't just value her experience as a First Lady who inspired me during my awkward phase — I value her experience as a senator who voted against Bush's tax cuts and investigated the health problems suffered by the 9/11 first responders. I don't think she's only made right calls — she took way too long to support gay marriage, for one — but she has the same degree of failings as most mainstream career politicians. No one who's devoted their lives to elected office has a perfect track record, and I think it's pointless to try to hold Clinton to a higher standard than other nominees

I won't try to convince you of anything, except that no matter what you may think to the contrary, our emotions play a role in how we vote and who we vote for, and that's not a thing to be ashamed of. That's part of being human. And lying about it — to ourselves or to others — keeps us that much further from honestly discussing how we actually make our political decisions.

I know that I am "supposed" to say "I want a woman in the White House, but not just any woman," and then talk to you about female politicians with such perfect, sterling liberal reputations that they don't stand a snowball's chance in Hell of ever making it through a single primary. I know that I am "supposed" to listen to other people's rationale about why liking Clinton is wrong until I agree with them, until I agree to pretend that there is no part of me that would work phone banks for her until my fingers fell off, no part of me that would weep with joy and relief as she took the oath of office. I know that I am "supposed" to swallow my true feelings, and let others tell me how I should think. It's what women are "supposed" to do every day, still, more than 20 years after the first political columnists told Hillary Clinton that she was too big for her britches.

But this time I can't, and this time I won't. I'm not voting for Hillary because I took a clear-eyed assessment of all possible Democratic candidates, their policy history, and their odds of making political concessions once in office, and I decided that Hillary was the best person for the job. I am voting for Hillary because I have been waiting to vote for Hillary since 1993. I am voting with my heart, and for once, I'm not going to lie about it.