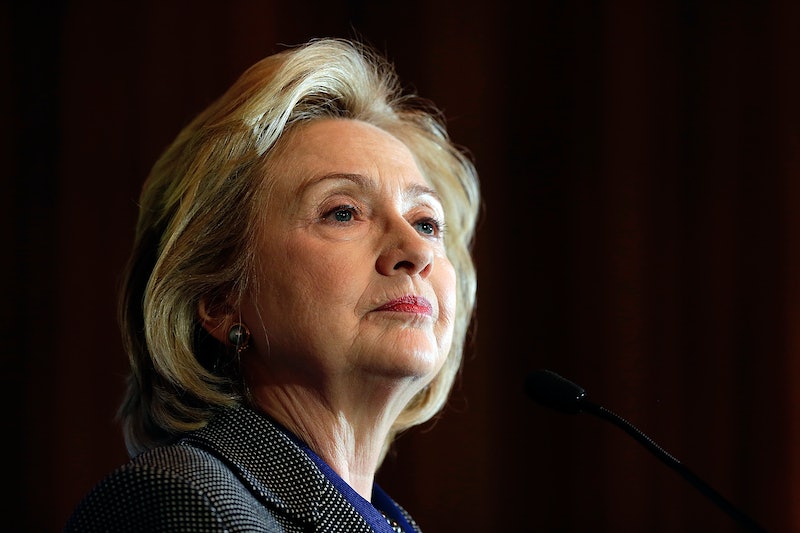 On Thursday night, Hillary Clinton’s campaign team reportedly held a hush-hush dinner for a couple dozen journalists and staff members. The initiative to engage amicably with the press was a significant move, just days before an email was released announcing Clinton’s presidential bid. But, according to the Huffington Post, Clinton wasn’t present to enjoy the shrimp appetizer and homemade cookies. She was instead represented by several top staffers, including the Clinton Campaign Manager, Robby Mook. He’s been called Clinton’s “secret weapon,” but who is Robby Mook?

For a start, he’s the same age as Clinton’s daughter. Chelsea and Mook are both a refreshing 35-years-old — which means, as the New York Times points out, Mook was twelve when Bill Clinton was initially elected president. Mook’s age, like Chelsea’s, is perhaps a boon for Clinton, 67, as her campaign seeks to freshen up the allure of a family that has been visible for over two decades on the U.S. political scene. Mook may just be the man for the job — or at least that’s what a recent Vice profile, portraying Mook as a self-effacing powerhouse, seemed to suggest.

As that article pointed out, “Robby Mook may have been born for this shit, but he wasn't born into it.” He grew up in Vermont in a modest family, the progeny of a retired physics professor and a hospital administrator. A man of simple sartorial tastes (chinos and polos, says the Times) and a “goofy sense of humor” (again the Times), he began his political career young: volunteering to campaign for a state legislator at just 14.

Mook was a theater enthusiast as a kid, and an email leak at the end of last year revealed that he had lost none of his taste for theatrics. In November, ABC News reported that Mook had maintained a private email listserv for campaign veterans entitled the “Mook Mafia.” It’s task? To “smite Republicans mafia-style,” in the words of the man himself.

But despite the playful banter, communication and networking are a serious business in politics and Mook’s aptitude for them is the main reason he landed his current gig, according to the Times. In 2013, Mook was working as a campaign manager for Terry McAuliffe, the current governor or Virginia and close friend of the Clintons. At that time, Mook skilfully cultivated the Clintons’ network of friends and contacts. Tina Flournoy, chief of staff to Bill Clinton, told the Times, “Eighty percent of it is people just want to be heard, and Robby was always available.”

Clinton’s success now will largely depend on whether Mook’s interpersonal skills, technological savvy and data-handling prestige will play out on the campaign trail. He’s a man who, according to McAuliffe, “is happiest when he is in his office with his computers and his data.” Mook’s commitment to data is reiterated by Brennan Bilberry, communications director for McAuliffe campaign, who summed up his approach as: “test everything, question assumptions and let data drive things.”

The approach seems to be effective, if Mook’s previous work for Clinton is anything to go by. In 2008, Mook was Clinton’s state campaign director in Indiana, Nevada and Ohio, attaining surprisingly good results for the presidential hopeful in that year’s ultimately disappointing primaries.

But Mook is not without his detractors. The email leak reported by ABC in 2014 was reportedly the work of a Mook Mafia list member who didn’t like the idea of Mook holding a leadership role. And as Vice reports, Mook’s tactics can have blow-back: his tendency to win campaigns by sidelining the opposing politician had knock-on effects for McAuliffe after that campaign was won. Since McAuliffe’s victory had been based simply on a negation of his opponent’s qualifications, his mandate to actually lead once in office was not easily accepted, according to Benjamin Tribbett, a political blogger in Virginia.

Vice suggests that Clinton’s campaign could play out similarly, with Mook’s aggressive tactics rendering an already no-holds-barred battle even dirtier. Mook has been described as McAuliffe’s “makeover artist,” but the success of Clinton’s campaign will surely demand something more than skin-deep. Nevertheless, the wunderkind has clearly won the respect and trust of Clinton — helped by the fact that he’s been onside since 2008. Ellen Tauscher, a State Department official and Clinton supporter, told Bloomberg:

You can't have someone in such a pivotal and important position who is unknown, … For people that want to be reassured about no repeat of 2008 issues, I think that he definitely answers the mail on that, too.

As Mother Jones puts it, as campaign manager, Mook “has the formidable task of repackaging perhaps the most widely known and picked-over public figure in modern politics and convincing a weary electorate that she should lead the country for the next four years.” No easy task, especially given the sheer number of people involved in the Clinton campaign. In the crush of personalities, it seems that Mook’s first instinct is to remain relatively inconspicuous.

“He's cut from a very different cloth from the bold, brash campaign managers that we hear about so often,” pollster Geoff Garin, who worked with Mook on McAuliffe's run, told Mother Jones. “He does not seek out the spotlight and in fact does everything he can to avoid it.” Unlike most people of his generation, let alone those in politics, he has no Facebook page. He has a Twitter account, but has apparently forgotten the password. He has declined to comment to any of the publications recently profiling him, so far as I can tell. He also happens to be openly gay.

Mook’s disinterest in self-promotion will perhaps prove useful: when juggling hundreds of competing egos, it must be a relief not to have to worry about one’s own. A Democrat close to the Clintons told Mother Jones:

The new boy on the block has to learn who those people [in the Clinton universe] are, how to accommodate them, and, importantly, how to harness them towards the common enterprise. They all want Hillary elected, but they also all have their own turf.

The Clinton campaign is an unwieldy vessel: weighed down by familiar personalities and reputedly beset by infighting, its steerage to victory will be neither smooth nor easy. Whether the data-driven Mook is up to the task will soon become apparent.