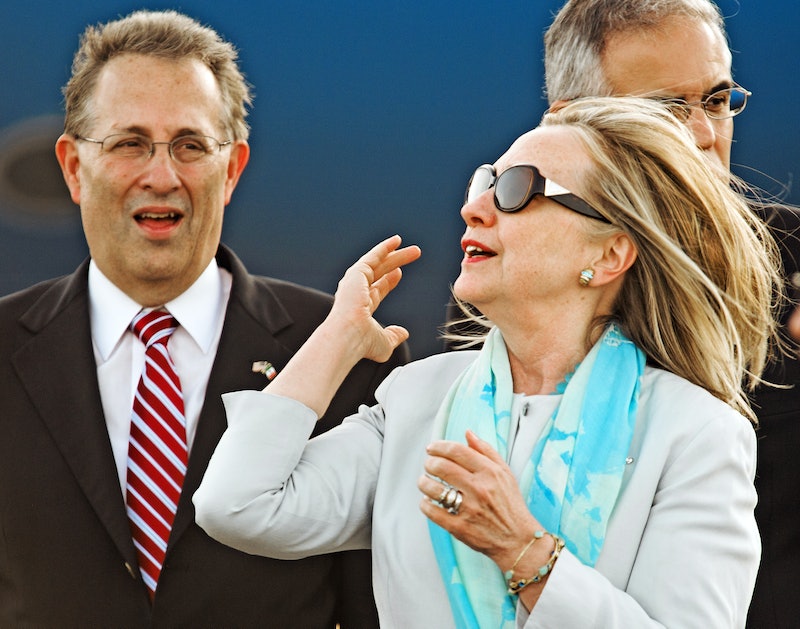 Many public figures are as notorious for their looks as their talents, and politicians are often treated in the same superficial manner. Even 2016 presidential candidates are not immune to discussion of their ensembles, beauty regimen, or hairstyles, Hillary Clinton especially, despite the fact that Clinton has never professed to be a clotheshorse, or even interested in sartorial matters. As a self-professed couture enthusiast, I can understand the inclination to discuss the meaning behind an ensemble or hairdo. However, there is a time and place for such inquiry, and neither a press conference to discuss the fallout from a bombing nor the inauguration of a new mayor is the appropriate moment for aesthetic topics.

Unlike celebrities du jour, fashion designers, or artists, Hillary Clinton is not one to emphasize her appearance or aesthetic preferences, yet the press does not seem to understand a woman who eschews fashion in favor of policy. Read on for five times Hillary Clinton's actions should have been the direction of the media's attention — but her hair received the brunt of the reportage instead.

1. When She Was Attempting To Support New Mayor Bill DiBlasio

Never has a haircut caused more political — or aesthetic — controversy than when Hillary Clinton displayed freshly coiffed bangs as she fervently applauded Bill DiBlasio's inauguration as New York City Mayor. Perhaps eyes should have been on the mayor himself instead of Clinton's hair; nevertheless, the Twitterverse was abuzz with conflicting opinions on the new 'do.

2. When She Was Trying To Address The Horrific Deaths Of American Soldiers In Libya

There should be no other focus at a military funeral than the families of those who perished and how to move forward without another such incident. However, mere months after Hillary Clinton stepped in to give remarks at the funeral of soldiers who had been lost in Libya and sought to provide her opinions on how the events transpired, the world instead decided to focus its attention on the testimony of Clinton's hairdresser, Isabelle Goetz. A US News And World Report feature grappled with the true symbolism behind Clinton's hair while readers attempted to ascertain exactly what Clinton's hair had to do with Libya.

3. When She Was Discussing Kyrgyzstan In A Completely Non-Hair-Related Forum

Apparently the use of explosives and unrest in Kyrgyzstan was simply too distressing for the press corps to handle in 2010, because in the midst of a chat regarding the country's current standing, the event's moderator shifted the chat to lighter topics — including Clinton's favorite designers and aesthetic choices. Unless you're an E! reporter on the red carpet, asking Hillary Clinton, "Who are you wearing?" is an ill-advised move.

4. When She Attempted To Form A Better Working Relationship With President Obama

Apparently, even Hillary Clinton can't dip out to lunch without incurring the scrutiny of the media. An attempt of Clinton's to chat with President Obama sporting brunette lowlights created a frenzy not unlike a new hairstyle on the Oscar's red carpet.

5. When She Was Trying To Promote Her New Book

A book entitled Hard Choices should not contain any mention of selecting an appropriate hairdo. However, Hillary Clinton's author's note possessed a reference to her penchant for scrunchies.