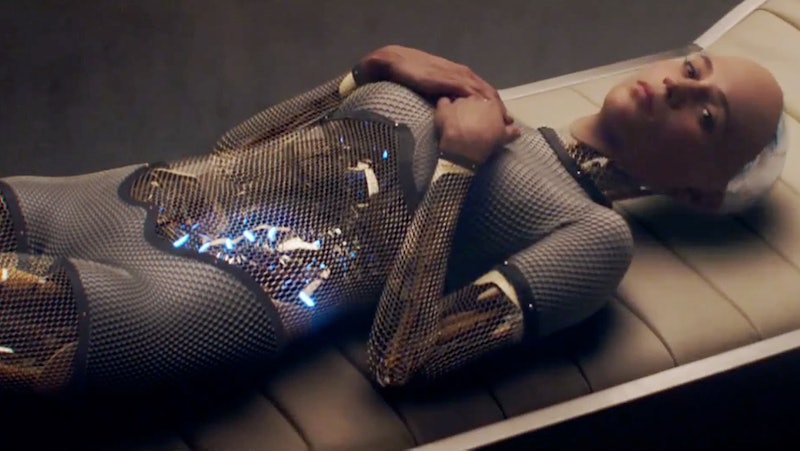 (The following alludes to some significant spoilers for the film Ex Machina.) Standing out among science fiction’s vast lot of mainstay elements is the robot: the artificially intelligent anthropoid crafted by man to do his bidding, veering quite often toward a fate less amenable to the sustenance of the human empire. Rich with a bounty of metaphorical inclinations, robots have found work selling the allegories of a variety of sci-fi stories and movies. On top of the many epics about free will, subjugation, mortality, and organic hubris, there’s so often an additional layer of gender politics present when robot characters are written as female. The genre's long history of experimentation with this trope has taken many forms, the evolution of which seems to be a chief focus for the new sci-fi movie Ex-Machina : a film by Alex Garland and starring Oscar Isaac, Domhnall Gleeson, and Alicia Vikander.

Early science fiction instituted the idea of robotics as the plight to achieve perfection — the perfect assistant, the perfect co-pilot, the perfect soldier. With 1927’s Metropolis, we saw the mission to create the “perfect woman.” The '80s brought this quest to social, romantic, and even sexual contexts, with movies like Weird Science and Cherry 2000 emboldening a genre that’d continue on indefinitely. Changing in execution and ambition since the days of ’80s camp, this line of fiction has given us Eve of Destruction, Toys, Austin Powers, Simone, Her, right up to this year's Ex-Machina.

The film revisits a traditional story — man’s aspiration toward the invention of A.I. — but with an intimacy (and a hipness) that we haven’t seen in quite some time. Oscar Isaac plays the indubitably masculine genius behind the latest grab for the technological Holy Grail. When we meet him, he’s halfway through a round with the punching bag and coming off a hard night of binge drinking. He consumes plentifully, jokes acerbically, and commands every conversation he enters with his new colleague, the decidedly “beta” Domhnall Gleeson.

Gleeson, soft-spoken and sensitive, is employed to apply the Turing Test (an interview intended to either validate or discount the recognizable humanity in an artificial being) to Isaac’s latest model, “Ava” (played by Alicia Vikander). New to consciousness and a stranger to the world outside her room, Ava is only first discovering what her identity entails, femininity and all. And Ex Machina is just as concerned with what Ava’s femininity means to her as it is with what it means, disparately, to Isaac and Gleeson each.

As Isaac is the more ostensibly imperialistic party, and his relationship with Ava is the first of which audiences may take note (and may take issue with). His literal containment and approaches toward perfection of Ava may be perceived as outright villain-esque, akin to the sort of subjugation of women under a masculine reign of yore. But further exploration of the characters’ interactions suggests just as troubling a toxicity in the way that Gleeson, kindly and compassionate, treats Ava.

Unlike Isaac, Gleeson never treats Ava with malice or morbidity. As he conducts his interactions with what he knows for certain to be an automated model, Gleeson becomes increasingly protective over her preciousness. He instigates her to say and do things that enchant him, unconsciously defining Ava by the feelings she awakens within him. On the same (equally misguided) token, Gleeson begins to define himself for the feelings he reciprocates for her. Under this dictum, he proclaims her his and his hers, which comes to a particularly volatile head when he decides she needs saving and that it’s his job to play savior.

As the men around her are busy trying to conquer, perfect, save, and claim Ava, she is coming to understand who she is. As she has nothing to know from other than the men who build, contain, and interrogate her, Ava at first does indeed define herself through masculine eyes. She is Isaac’s daughter and Gleeson’s muse; as Ava discovers the flaws in the men who dominate her, however, she begins to allow for her own agency. As she does, she works toward the achievement of freedom — something only possible through the entertainment, and subsequent destruction, of how her men see her.

Throughout the film, we see Ava “play” Gleeson, working his sympathies as the only means to get such a man to abandon his post between her and the rest of the world. In contrast, we see her inflame Isaac, whose brazen masculinity is unaffected by the softer touch, but can easily be challenged to the point of calamity in the presence of his “subordinate’s” unabashed strength.

But while Ava is dutiful about her ploy, we do see instances of her genuine humanity peering through — humanity that is just for her, not for the benefit (or at the expense) of her men.

When asked by Gleeson where she would go if she could set foot beyond her room, Ava treats Gleeson to an answer that underwhelms him: a busy intersection. He vocalizes his disappointment. He was hoping for something more exotic, more romantic, more creative. But for this moment, her complicated feelings for Gleeson and ultimate goal of liberty aside, Ava isn’t concerned with how she is seen. She gives the answer that most satisfies, validates, and defines her, from the inside out.

You might see Ava as a living (or operating) essay on the depictions of female robots in science fiction since Metropolis. Characters built, controlled, and defined by their human male overlords and companions, evolving ultimately to the point of self-sustenance…or, better still, achieving the self-sustenance they always had at their disposal. In this way, Ex Machina could be the cap on a long line of films about men trying to create women, topping the lot with the simple insistence that — despite the maxims that men like Isaac and Gleeson cling to — it is these women who create themselves.

More like this
A 'Bridgerton' Star Just Dropped A Major Hint About Joining The Live-Action Barbie Cast
By Bustle UK
Sandra Bullock, Girlboss Extraordinaire
By Matt Harkins & Viviana Olen
What Makes A Sally Rooney Sex Scene So Hot?
By Samantha Leach
Here’s Everything Coming To & Leaving Netflix In June
By Alyssa Lapid
Get Even More From Bustle — Sign Up For The Newsletter